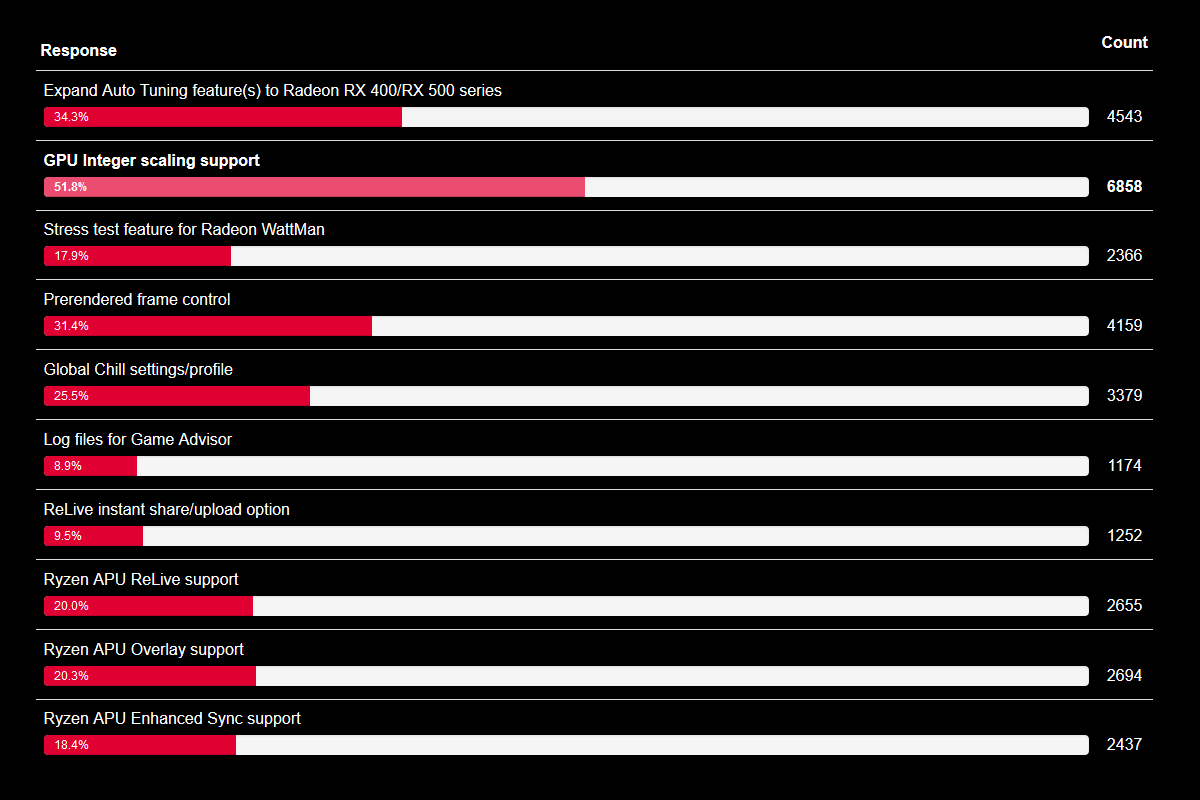 Link to the poll:

The feature in question is all about improving the visual quality of low resolutions on modern high resolution monitors. The current state of affairs is that low resolution signals are up-scaled to the monitor's native resolutions with bi-linear up-scaling, which uses interpolation and introduces unnecessary degradation of image quality that looks like blur. "Integer Scaling" is all about circumventing this problem by converting each pixel of the original signal into a perfect square-shaped block. This only works as intended at integer scaling ratios, hence the name "Integer Scaling". Main reasons to use resolutions smaller than the native resolutions of modern monitors include retro gaming (especially old games and games with pixels art) and improving the frame-rate (which is especially important for users of 4K-monitors since modern display adapters still struggle with providing an adequate frame-rate at 4K when running hardware-demanding state-of-the-art games.)

The idea itself is not new. The discussion about it started on Nvidia's forums in 2015 and now has 1141 posts (or 77 pages). Approximately two years ago an online petition was started and managed to collect over 2000 signatures so far. According to the best of my knowledge (correct me in the comments below if I am wrong) this is the most popular online petition regarding-consumer oriented graphics hardware so far. The petition on the 2nd place (which was all about Nvidia's support of adaptive sync) didn't get even close and only collected 190 signatures in a time period of one year.

Link to the petition about "Integer Scaling":

It appears that AMD's competitor Nvidia is not intending to add the feature in question any time soon due to technical reasons.

Link to the topic on Nvidia's forums:

Does AMD have any comments about their intention (or lack of intention) regarding making it possible to use the feature in question in conjunction with their products? I am sure that people who were asking for this feature for the last several years would love to hear AMD's opinion.