I have a case with a front fan intake and rear fan exhaust.

This was to replace an older rig, 4th gen i5/1050ti and spend some money before my baby arrives in 2 months time.

All seemed to be working well until I load up some games and the temperature progressively increases on the CPU to about 90 degrees celsius.

To be clear. On power on (from cold) CPU sits at about 50

After boot up from cold, in windows sits at about 65

With a game (consuming ~15% CPU) its now gradually increased from about 80 to 90 degrees.

No difference. Average core voltage is 1.3V at the moment.

I took it to bits, removed the cooler, which unfortunately for me had vacuumed itself to the CPU. A fair few minutes later, hands covered in thermal paste, both CPU and cooler were off.

I cleaned both up, applied some hydronaut I had re-seated the cooler.

Long story short, i'm back in Windows, on my game, working well, but Ryzen Master has my CPU temperature at 90+ degrees, tried a few different games, same issue, Cinebench also.

I've heard similar stories from other people with this motherboard and the other MSI X570-A PRO but i'd really like to tie down this problem before resorting to sending parts back/buying new parts.

Anyone else seen this? I did a quick search but alas, my findings were slim.

- Just purchased a Dark Rock Pro 4. It doesn't actually fit in the case but for the purpose of resolving this issue i'm willing to give it a try. It arrives tomorrow so I will update once installed.

- I tried the "Game Boost" option in BIOS today which took the processor to 4.15GHz standard but alas, when running Cinebench, it hit thermal cut-off, sooo I turned that off straight away.

- Filed an RMA for the MSI board.

- Dark Rock Pro 4 arrived and I installed it. This has a massive impact on temperatures (albeit I had to keep the case open for this test - but that didn't help temperatures before.

Within my game of choice, where I used to hit 95 degrees, it now sits comfortably at about 66 degrees - it does require further testing, I was just excited to share my initial results, they look promising.

After enabling MSI's "Game Boost" in BIOS, which took the CPU from 3.8GHz to 4.15GHz, I repeated the Cinebench test with Dark Rock Pro 4 cooler:

In both scenarios the PC now idles at around 38 degrees.

The case has an exhaust fan on the rear and rear-top with two intake fans on the front.

So this seems to have resolved my temperature issue, thanks to those who took the time to reply I've certainly gone away more knowledgeable than before!

To summarise, based on the research i've done and the advice here, i'd put the overheating down to the following:

Can you make a picture of how your case looks inside?

3900X has maybe not the best in the world cooler bundled, but it should keep temperature below 95C on most configurations.

I've had it in bits again and been moving bits around but currently it looks like this. 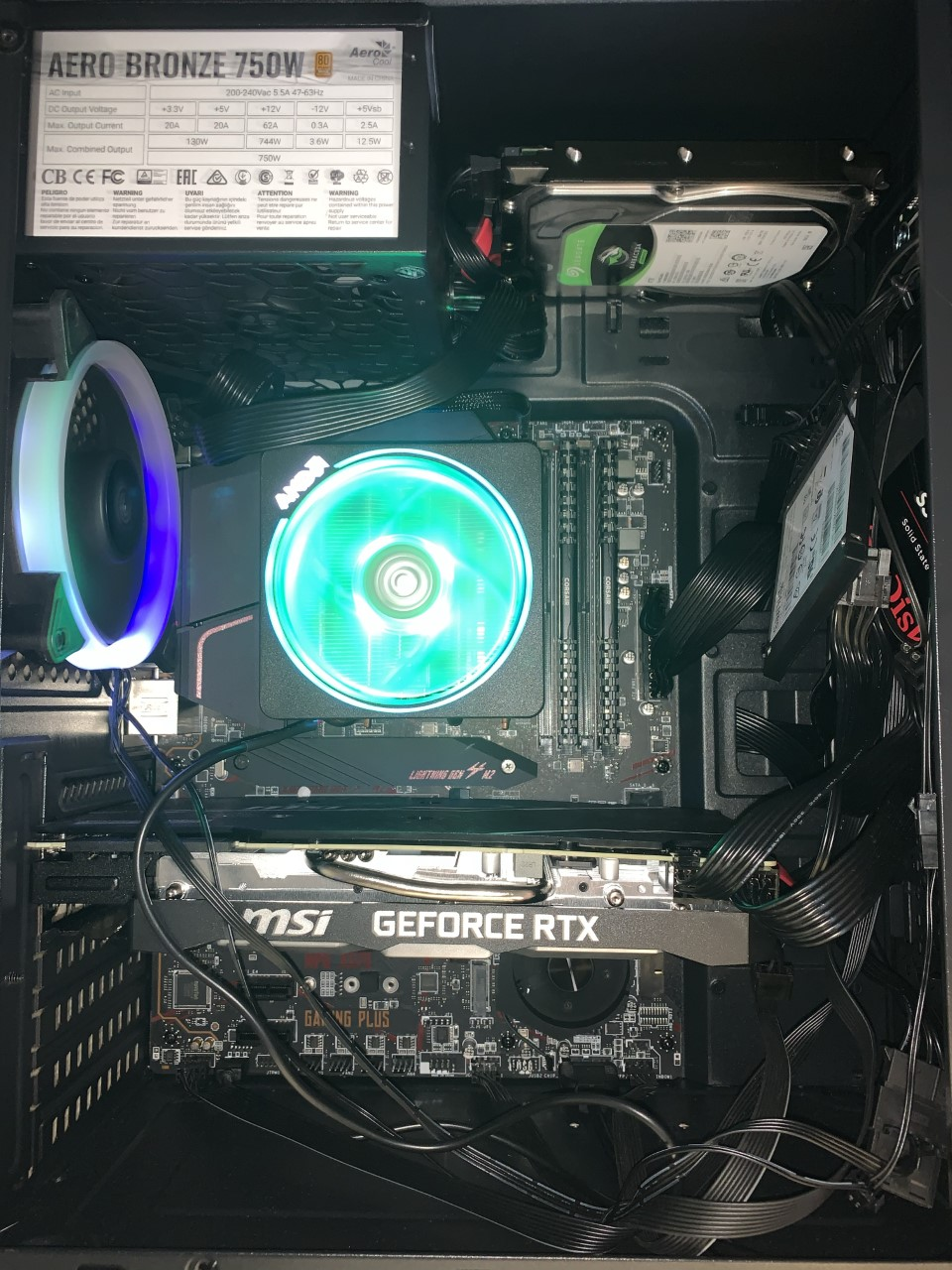 I did have a front fan attached too drawing in, from which I collected the results shared here.

Excuse the SSDs, these were tucked away nicely, but since removing the front fan i've just let them hang.

PSU cables are routed out of the side of the case and back in.

It is pretty warm here, about 25degC ambient, and the PC is tucked away, although front and rear is clear.

Completely unloaded it sitting around 62degC 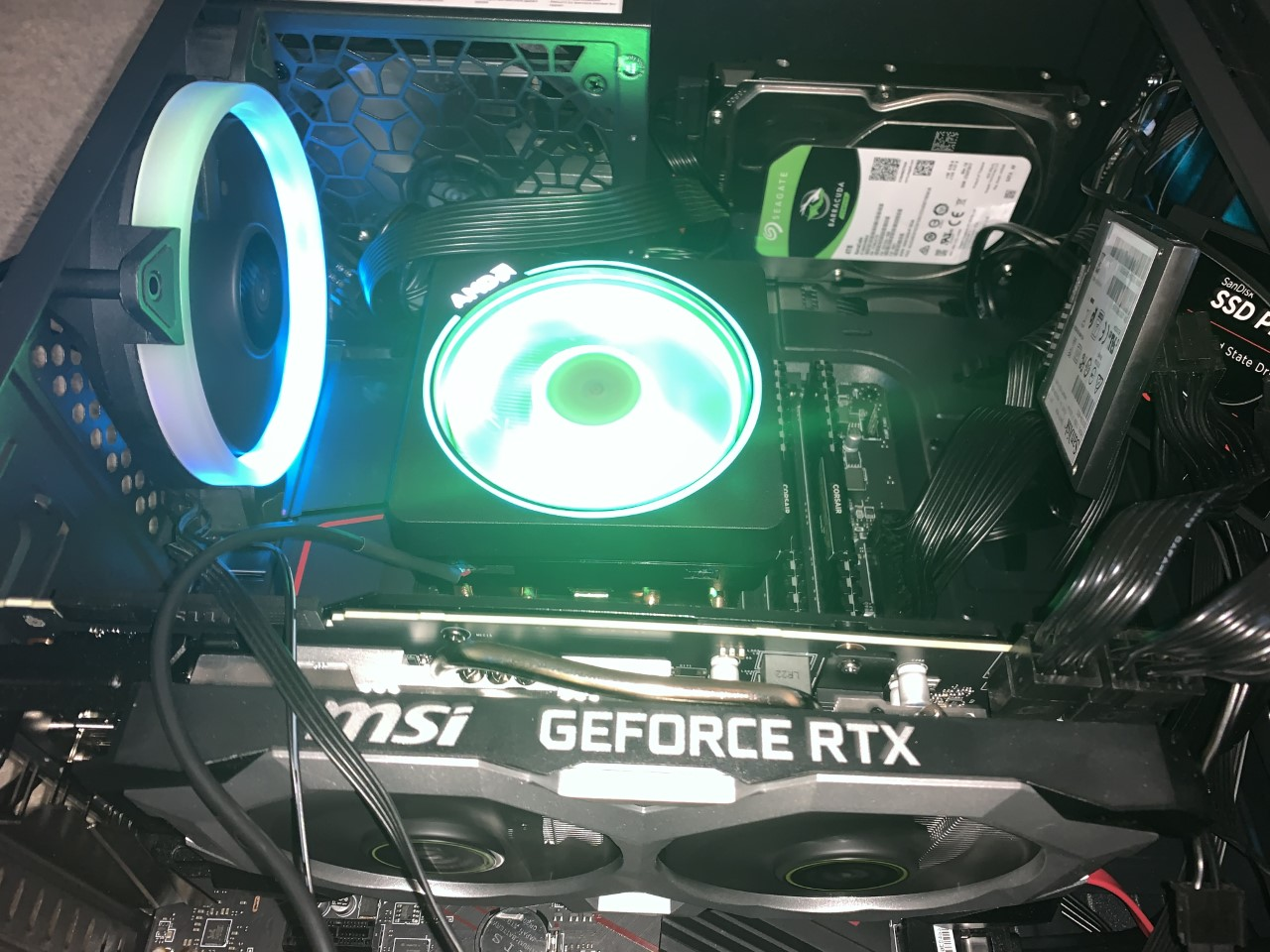 By the description of your computer fans you seemed to have an old style computer case.

The Ryzen starts to throttle at 95C so you are close to the processor to start throttling to keep the temps at 95c or below.

The above suggestion is just to eliminate poor air circulation inside the computer case.

elstaci‌ Old style, probably, the PSU is mounted at the top. Do you mean new designs which are slightly thicker to accommodate a big CPU cooler, dedicated PSU compartment (at the bottom?) and space at the top and front for 280/360 cooler fans? I'm open to getting a bigger case if these compact ones really shunt the cooling.

I have purchased a better cooler and will fit it today, I can try with and without case open/fan blowing directly into the full system to see what effect this has.

On a side note, I did some research on my motherboard (which I must admit, have never done - other than ensuring compatibility) and setup with overheating issues and came across these lower end MSI X570 boards really struggling to stay cool. I watched this: Affordable X570 VRM Thermal Performance, Warning: One Board Sucks! - YouTube and read this X570 Motherboard VRM Overview – der8auer ECC

It summarises that at normal operating voltages, when under load (mine proved that the CPU doesn't even need to be under load, even just the graphics card under load) it runs really hot.

Following my findings with this I have purchased an ASUS Prime X570-P which did really well in these temperature tests which I will compare tomorrow.

While your at it, might want to go ahead and buy a new Case cause that case (the one in the img posted) just isnt good enough in terms of airflow no matter how many fans you add to it (its of an older design which isnt ideal for a CPU that runs as hot as the 3900x) and that 2070 card is only gonna further increase the internal case temps as it dumps hot air inside (during gaming) which then gets mixed in with the cooler air from the your intake which in turn results with your CPU hsf sucking in warmer air than normal compared to a larger case that has some proper Air Flow.

Dont even need to spend much on a case, and if looks isnt a priority, you can get one that are really cheap but still has decent enough layout for some decent airflow. For example im using one of the cheapest cases from raidmax Called Radimax Zeta for use on my 3900x, just buy some additional fans for the front intake and top exhaust and your good to go, can even accomodate a larger AIO cooler if you wanted to like a 280mm or 360mm AIO which is what i used for my 3900x.

jamesx380fx‌ Funny you should say that, I ordered this today Klaw - Be Cool. Get AeroCool and coincidentally is pretty much identical to the internal layout of yours.

It was very reasonably priced and I was happy with the quality of the smaller one I already have (albeit its too small).

This one will fit the new cooler nicely and allow me to hide away those SSDs on the back of the side panel.

Nice looking case, that should have enough room for some decent cable management, gonna be tight fit though hiding all those cables seeing as your not using a modular PSU with removable cables.

Personaly though (Airflow/Cooling wise) im not a fan of cases that have side intakes on the front panel cover, moreso for ones that have fixed small plastic grills that are non removebale (there are cases that have removable aluminum dust guard) cause the more obstruction there is in front of your intake fans, the worse your airflow inside your case is going to be, which means your gonna have to use high CFM fans (static pressure fans if possible) to compensate so as to not get too much negative pressure inside (results in dust coming in/building up in places that are harder to clean)

Which was why now i mainly use cases that only have a minimal acceptable obstruction on its front panel/cover. used to build PCs for friends and other ppl and i noticed the difference in temps (CPU/GPU) with cases that have those front panel side intakes with fixed grills compared to the ones similar to the Raidmax Zeta which is just an aluminum mesh in the front

For cases that use a Front panel front intake with aluminum mesh dust cover like the ones the Raidmax Zeta uses (which can be removed) the CPU temps was about 5-10c lower depending on whether you use an AIO or Stock. Particularly with AIOs and with its its radiator placed in the front (ideal placement for CPU cooling when using AIOs and is what im using with my 360mm AIO in a push pull fan config) CPU temps was about 8-10c lower/cooler under heavy loads compared to using a front panel uses side intakes with fixed grills (have multiple cases new and old that share the same form factor that have front panels that are prety much the same size that are interchangable, makes testing easier). GPUtemps are also slightly cooler in general but it doesnt really seem to care as much, the only thing i noticed (with nvidia GPUs in particular) is that they tend to stay at higher turbo boost clocks for much long due to the cooler temps, in terms of fps it was only something like 1-2fps which really isnt much.

In Short, the less bends and obstruction the air has to pass through to get inside your case then quickly exhausted uptop (hot air rises, making top exhaust and ideal fan setup for most), the better the internal Airflow you will have and the cooler the internal CASE,CPU & GPU temps will be. The only downside is that cases like it (front intake Cases with front mesh like the Raidmax zeta which btw is larger than it looks, you can fit 3 120mm fans at the top) tend to not look very appealing to most ppl or in some cases, they look really great but they tend to also be abit more expensive like for example the Fractal Design Meshify C.

- Filed an RMA for the MSI board.

- Dark Rock Pro 4 arrived and I installed it. This has a massive impact on temperatures (albeit I had to keep the case open for this test - but that didn't help temperatures before.

Within my game of choice, where I used to hit 95 degrees, it now sits comfortably at about 66 degrees - it does require further testing, I was just excited to share my initial results, they look promising.

After enabling MSI's "Game Boost" in BIOS, which took the CPU from 3.8GHz to 4.15GHz, I repeated the Cinebench test with Dark Rock Pro 4 cooler:

In both scenarios the PC now idles at around 38 degrees.

So in comparison to stock cooler (pinch of salt - cover removed from side of case, and it's a cooler evening)

* - not sure how this was lower... needs further testing.

I will update the original post with further findings as I test it this evening.

The case has an exhaust fan on the rear and rear-top with two intake fans on the front.

So this seems to have resolved my temperature issue.

To summarise, based on the research i've done and the advice here, i'd put the overheating down to the following:

I put the bottom-right fan low enough to send some air through to the spinny disk I have there.

Update after some overclocking:

- Took the CPU clock to 4.15GHz and ran Cinebench, I just changed the multiplier in small increments.

- Took the CPU clock to 4.25GHz and ran Cinebench:

- Took the CPU clock to 4.30GHz and ran Cinebench a few times.

It seems this has more scope for further overclocking, but i'm going to stop here unless anything I've done is fundamentally wrong.