Microsoft plans to start enforcing updates on devices running Windows 10 version 1803 to make sure that the systems continue to receive updates released by the company.

Microsoft revealed plans to enforce updates on May 31, 2019 but did not provide details at the time. The company changed the feature update delivery system recently by moving it from a mandatory system to a user-controlled system.

Updates are installed when administrators select them for installation; the only exception to the rule is when a version of Windows 10 is about to reach end of support.

Microsoft releases two feature updates per year, each with its own end of support date (and different dates depending on whether it is an Enterprise device or home device).

The company notes on the Windows 10 version 1803 release notes page on its Support website:

The Windows 10 April 2018 Update will reach end of service on November 12, 2019 for Home and Pro editions. We will begin updating devices running the April 2018 Update and earlier versions of Windows 10 in late June 2019 to help ensure that we keep these devices in a serviced, secure state.

The update process begins in late June 2019 and will be enforced. It is unclear how Microsoft plans to do so. One possible option would be to push the updates to devices running the version of Windows so that they get installed without user option to block the installation.

A handful of scenarios come to mind where enforced updates could go wrong terribly, e.g. a never ending loop of pushing the update and the installation of the update failing because of issues.

We don't know how Microsoft plans to address installation issues; what happens if Windows Update detects an incompatible program? Do users get the choice to remove it, and what happens if they don't agree to the removal? 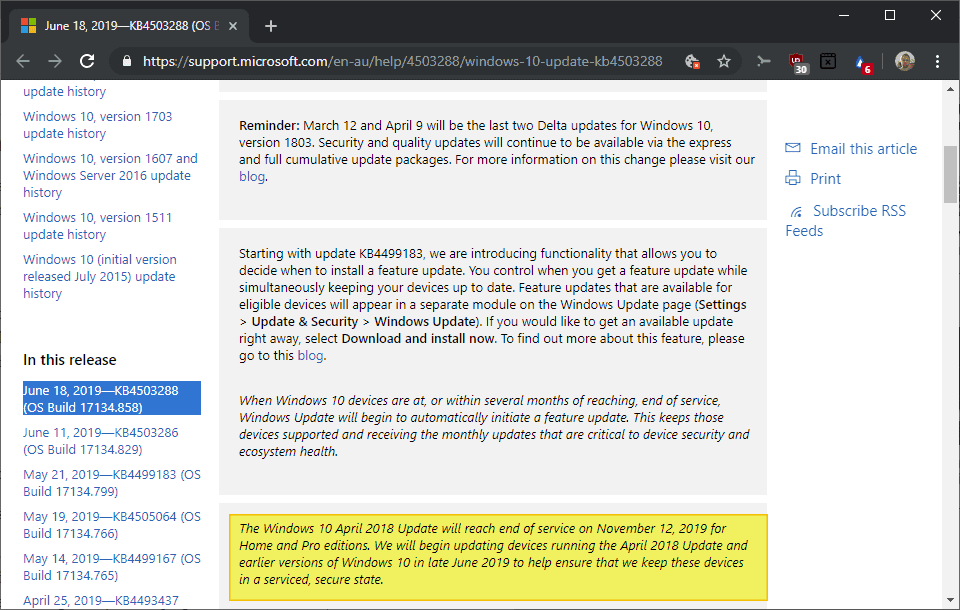 What about systems set up to delay feature updates? Will the enforcement override the setting?

Windows 10 version 1903 seems the more likely candidate as systems with version 1809 would need to be upgraded six months later again when that version of Windows is about to reach end of support.

Microsoft plans to use machine learning for the rollout process.

We are now beginning to build and train the machine learning (ML) based rollout process to update devices running the April 2018 Update, and earlier versions of Windows 10, to ensure we can continue to service these devices and provide the latest updates, security updates and improvements.

Update enforcement is a controversial topic. It takes away control from administrators or users on the one hand but ensures that systems won't go out of support on the other hand.

Oh yea, this is their "You can install feature updates (new builds) whenever you want, but starting at 6 months before build expiration we will start pushing out the next (or latest) feature update" thing. The whole build garbage has always bothered me since Microsoft doesn't host them on WSUS, so you can't keep an updated update archive...

Thankfully 1903 hasn't given me any issues, I upgraded to get the new scheduler for Ryzen...haven't noticed any difference yet