I think I have an issue related to this:

Today after installing a MSI RX480 8GB Gaming X (latest .154 vbios) on an old 890GX+FX8350 system with an ancient HP w2207 connected via DVI>DVI I got something similar. When installing drivers via setup, right after the monitor blinks and the progression bar isn't finished, the only colors displayed on my screen were red and black on everything showing in the desktop. After unplugging the cable, toggle inputs on the monitor, or rebooting everything goes back to normal.

While trying to figure this out, once after installing drivers I got the exact same pink and cian cga-like colors as in the screen above, then I got only noise (all went fine after re-plugging the DVI cable). This red/black screen issue (or pink/cian) happened both when installing 19.4.1 and 19.1.1 via their setup, right after the driver was installed. The weird thing, is that manually installing the driver via device manager over the MS basic display driver doesn't cause this.

Fortunately, using a DVI>HDMI (to hdmi on the graphics card) cable on the HP w2207 seems to have solved it. The same card never had this problem with a Dell u2311 via DVI>DVI, but since last November I haven't tested that setup with newer drivers.

Right ! "DVI>HDMI (to hdmi on the graphics card) cable" = AMD GPU driver think that ALL plug's are CMYK (Cyan Magenta ...) but DVI is R.G.B !!! AMD engineer think that Users use only hdmi YCbCr and RGB go away

Today I bought 2 hdmi cable's (no More dvi) and No more AMD engineer Bug for RGB !!!

I have a bag full of video cables for DisplayPort, HDMI and DVI and adapters galore.

My Asus panel has all 4 interfaces for my amusement

Which vantages DP vs HDMI ?

I have a DP to HDMI cable, some laptops I have do not have HDMI output

But, why to use DisplayPort instead HDMi ?

So I bring an adapter to any dog and pony show

hardcoregames™‌ I understood your config... I want know why DP > Hdmi ("Try the DisplayPort which usually works better"). I know that DP have a great "Marketing" but I don't know why it would be better ?

DP can do 8K panels while HDMI is choking at 4K

DisplayPort and HDMI are close at 1920x1080, its at the higher resolutions and framerates that give DP an edge up

I have registered just to add to this thread. I suffered the same problem. I have an AMD RX580 and a fine card it is, but after a new install of Windows (and new AMD drivers) I turned it on this morning and my second monitor was all purple. To be fair it was more lacking green than being set to purple but you get the idea. Read the [TL;DR] at the bottom if you just want to try out the "fix".

I have a dual monitor setup, one has VGA and DVI inputs, the other has VGA, DVI and HDMI inputs. The RX580 has 3 (I think 3) HDMI outputs, 1 DVI and several DP ports.

Moving the cable from the second monitor to the primary one and it also displayed without green, when it was fine via HDMI, so this led me to believe it is either the cable or the card (either software or hardware) that were at fault.

I read another thread (and there are surprisingly few recent ones) that they fixed this with the nVidia control panel - albeit this was a comment from 2012 or something like that. So I went hunting in my Radeon drivers. I am currently using v19.7.1 (Win10 x64 Adrenalin) drivers. In the Radeon Settings dialogue there is an option to set the Display values - in this version of the software it's a button to the bottom right (3rd from the right in).

Clicking Display showed my two displays with the primary having more options. One of those was "Pixel Format" which was set to "YCbCr 4:4:4" however clicking it offered me 3 other options (one limited RGB, one full RGB and one with a different pixel ration). I chose the full RGB option, more in hope here, and it brought my green back!

Interestingly I can swap back and forth between them and none return to the purple. So in the end I have reverted it back to it's initial setting and it's fine. I put this down to a bug in the software. Now I have not rebooted since then but ultimately I don't need to worry that it's anything hardware (the monitor, the cable, the card) and that a simple software setting resolves it.

Open up Radeon Settings, select Display, on the primary monitor change the Pixel Format - doesn't matter what so long as it's changed. Your monitor will now return the green, and stop being purple/blue. You can return the Pixel Format back to it's original state (mine was "YCbCr 4:4:4") your monitor should not revert back to purple.

Hope this helps someone. It's not a problem I had encountered before and not one that seems to be discussed in forums (or certainly not one discussed recently).

I hope AMD fixes this.

I still get it, this "fix" returns the monitor to normal when I get the pink hue but does not keep it from happening everytime my monitor goes to sleep. This is not windows sleep but the monitors auto sleep.

Well the fix is purely to bring it back to a normal profile. I've found it to be a very inconsistent problem to diagnose. I have tried all sorts of different combinations from turning the monitor on after Windows has fully booted, turning it on before I switch my machine on, leaving it on auto so the signal determines when the monitor comes to life, and several other variations for good measure.

I've yet to see what exactly it is that's triggering it. Which is frustrating to say the least.

Very frustrating, these drivers are an absolute nightmare. I get no signal on certain monitors if I don't use the Windows provided driver and this issue on top of it.

It's almost certainly the drivers as the card has no problem working at near 100% load in demanding games. I'm on a 570 8GB so it seems to be a Polaris issue.

Screen anomalies suggest damage to the card output pins, the cable or the monitor input pins.

On every port type, with multiple cables and different monitors. Definitely not the case.

While I can't be certain for sure, I equally don't think it's the pins. 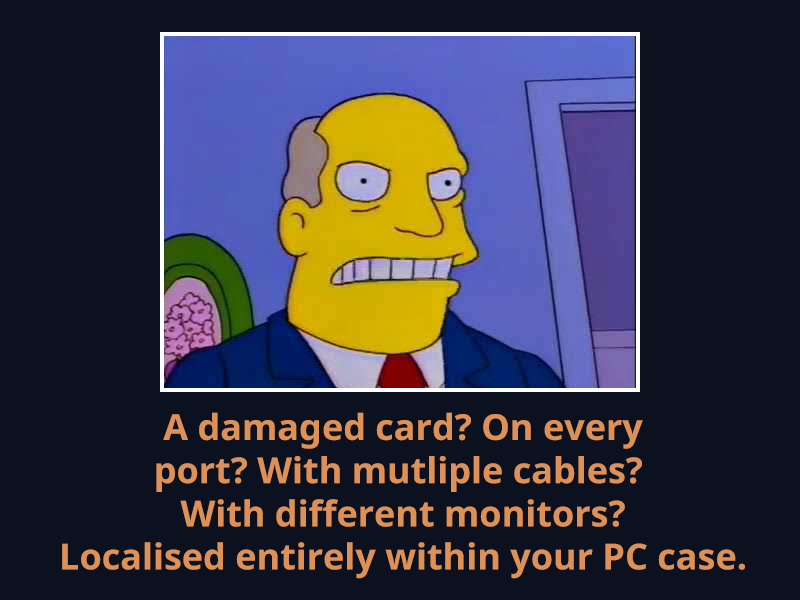 If the 'fix' works for you then it's almost certainly software related and not hardware. As to why the software acts like this? *shrug*

I just don't know if there's any point in RMA'ing my card. On my XG270HU there's straight up no signal past BIOS. It's no tvery appealing to be without card for something that might be the exact same once i get it back.

does this also happen when not HOT-plugging into a powered monitor?

When I've encountered the problem, it's made no difference. As with my reply above, I have real problems diagnosing the exact cause. My "fix" is purely for those worried their monitor and/or graphics card is f**ked - which is what I first thought.

I have it downloaded haven't installed, how did you notice that the issue stop or does it say anything about it.

This fix ( KB4505903 ) applies for 1903 Windows 10 version. The pink screen can be called after the computer goes to sleep and wakes it up again. After installing this patch, the problem disappears.

I believe I have this installed and I've certainly not noticed it happening again, although I would say it's nothing to do with going to sleep. My computer was given a "hard" off along with the monitor when it was happening.

I am constantly surprised at how many do not install updates