Did the Windows October 2018 update delete your files? Microsoft can help

After consumers reported a number of problems with the latest major update to Windows 10 — including deletion of user files — Microsoft has pulled the update entirely to investigate.

“We have paused the rollout of the Windows 10 October 2018 Update (version 1809) for all users as we investigate isolated reports of users missing some files after updating,” reads a note on the Windows 10 Update history page.

Microsoft announced that the Windows 10 October 2018 Update was available for download when it announced its new Surface Pro 6, Surface Laptop 2, and Surface Studio 2 at a media event on October 2 in New York City. Since then, users have reported a number of wide-ranging issues caused by the update, including lost files, issues with CPU usage, and reduced battery life post-update.

Due to these issues, Microsoft initially delayed the launch of the October 2018 update until the problems were resolved; now it has stopped distribution of the patch. The company had advised those who believe they have been affected by the update to call Microsoft support. Additionally, those who manually downloaded the update have been told not to install it.

There is a bit of hope for those whose files were lost thanks to the October 2018 update. Microsoft’s Dona Sarkar sent out a tweet advising those who lost files to contact Microsoft’s support saying the company had ways of restoring those files. For those wondering if they were affected, it is an all or nothing loss. If you have any files remaining at all in a Documents folder, you can be reassured that you have not been affected by file loss. 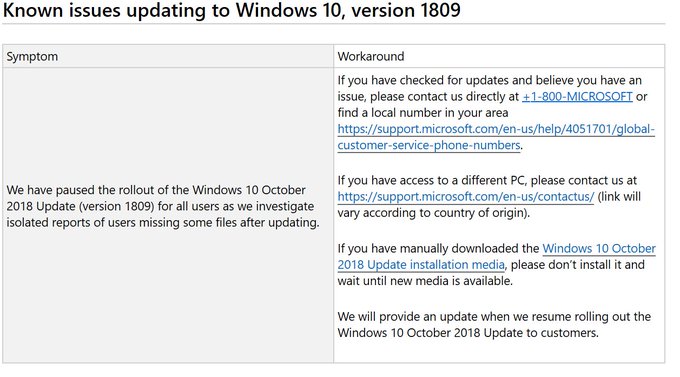 #WindowsInsiders If you've run into the "missing files after update" issue for 1809/October 2018 Fall update, please call our support line. They have the tools to get you back to a good state. This build is no longer available to download manually:  https://support.microsoft.com/en-us/help/4464619/windows-10-update-history …

The problem with disappearing files has been widely reported on various social media forums, including on Reddit and Twitter, with one user reporting on Microsoft’s community forum that he had lost up to 220GB of data after the update. Affected file types include documents, music, and photos. “I have just updated my windows using the October update (10, version 1809) it deleted all my files of 23 years in amount of 220gb,” forum member Robert wrote. “This is unbelievable, I have been using Microsoft products since 1995 and nothing like that ever happened to me.”

This problem may be caused by OneDrive, Microsoft’s file hosting and synchronization service. Twitter user @coolkevinator noted that if you have locally stored items that aren’t also saved to OneDrive, the Windows 10 update will wipe out the files stored on your computer. “Heads up to anyone updating windows,” the tweet said. “Apparently, if you have documents saved in your user directory, i.e. users/JohnDoe, and not one drive, the update will delete EVERYTHING in that location. So if your ‘Documents’ or ‘Pictures’ don’t have a one drive symbol, MIGRATE IMMEDIATELY!”

According to MSPowerUser, rolling back the install to the previous version of Windows 10 does not bring back the files. If you’re updating to the October 2018 Update, be sure to backup your file to an external drive, OneDrive, or another cloud storage service in case of data loss.

Another issue caused by the update relates to the Intel Display Audio driver. This glitch affects users running PCs with Intel’s 6th-Generation Skylake processors or newer. Users reported excessive CPU usage, which will lead to diminished battery life. Microsoft and Intel both acknowledged the issue, and Microsoft has halted the update to affected systems. “To ensure a seamless experience, we are blocking devices from being offered Windows 10 version 1809, until updated Intel device drivers are installed on your current operating system,” Microsoft said on its support page. “We recommend that you do not attempt to manually update to Windows 10, version 1809, using the Update Now button or the Media Creation Tool from the Microsoft Software Download Center until newer Intel device drivers are available with the update.”If your system is affected, you can manually download the Intel Graphics Driver prior to downloading the Windows 10 update. This driver also contains the fix for the Intel Display Audio driver glitch.

Although the October 2018 Update is available now, it’s not an automatic process yet. You can manually check for the update by going to Settings, Windows Update, and then Check for Updates. The update should automatically download for all users starting October 9.

For now, users should hold off on updating their Windows 10 PC until Microsoft addresses all the early complaints from the download. If you must download the October 2018 Update, we highly recommend that you back up all your files and install the Intel Graphics Driver before proceeding.