This seems to apply only with nVida GPU cards installed but it could be used in AMD Drivers to give the same kind of Boost to the Ryzen CPUs:  Nvidia GeForce Driver Provides Shock 50% Boost To AMD Ryzen Threadripper Gaming Performance

The performance of AMD's 32-core Threadripper 2990WX in games was lackluster when I reviewed it a couple of months ago and there didn't seem to be much of a reason other than two of its dies can't access the rest of the system directly or maybe a scaling issue. Even this, though, didn't add up as games don't need that many cores, but keen-eyed enthusiasts spotted a huge revelation in a recent Nvidia driver's release notes that looks set to offer an enormous boost to Threadripper performance in games:

Nvidia's drivers from 399.24 onward include a fix for a bug that could cut performance in half for AMD's Threadripper 2990WX CPUANTONY LEATHER

According to the release note, which incidentally was posted right at the bottom of the bug fixes and performance boosts, Nvidia claims to have fixed a bug that could see 50% wiped off the Threadripper 2990WX's performance in games. It was certainly a big issue with journalists at the time as it meant the CPU was limited to a niche set of tasks, with it performing worse than cheaper CPUs with fewer cores in games and some other applications.

The latest drivers - in fact, everything from ForceWare 399.24 onwards, includes the fix and the performance boosts are, quick frankly, shockingly huge. PC Perspective has already carried out its own tests, which back up the claims and, fascinated to see the results myself, I've re-run a handful of my own tests too which you can see below 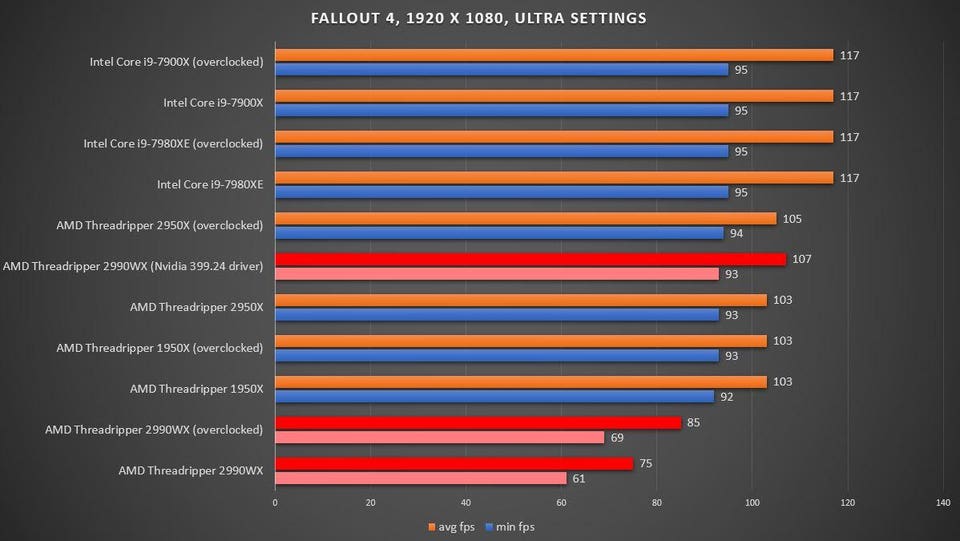 Fallout 4 is an aging game and I've now ditched it from my usual benchmarks, but I re-ran it here for comparison seeing as it saw the biggest increase with the new driver. The boost was massive, with the minimum frame rate rising 52% from 61fps to 93fps and average frame rate from 75fps to 107fps - essentially up to Threadripper 2950X performance levels. Clearly, something was very wrong with the older Nvidia drivers in how they handled the Threadripper 2990WX. 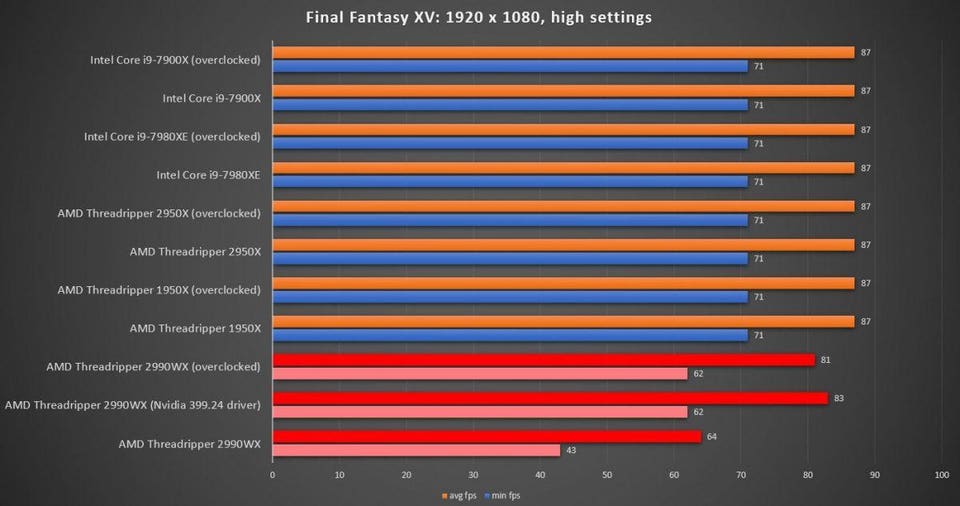 It's not quite the same uplift in the more modern Final Fantasy XV, but you still see a 4% increase in the minimum frame rate from 43fps to 62fps, although this is still 9fps lower than the stock speed result with the Threadripper 2950X.

Deus Ex performance rose by 15% with the new driver, which was faster than the overclocked result of the CPU, but again, it was still slower than the Threadripper 2950X. 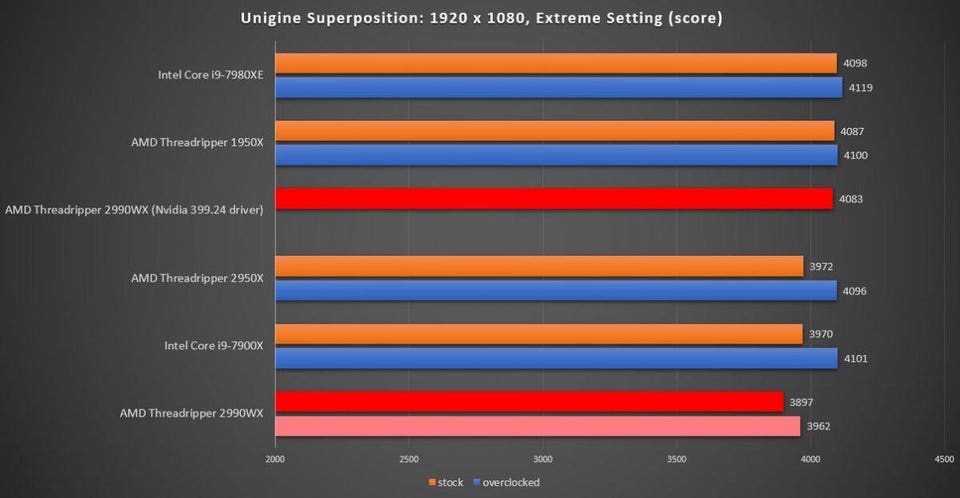 Finally, the Superposition benchmark was another to see poor performance from Threadripper 2990WX, but the result with the new driver of 4083 was more in line with other scores and actually faster than the Threadripper 2950X too.

This is clearly a huge deal as one of the biggest drawbacks with AMD's 32-core CPU was its poor performance outside of workstation applications. The Nvidia driver issue maybe sheds some light on why the CPU might not be performing as expected in some tasks too - it could be down to software and driver optimization as well as the inner workings of the CPU itself. Clearly, the vast majority of gamers out there have CPUs with fewer than 20 CPU cores, so Nvidia's drivers may well simply not have been tested in games with the Threadripper 2990WX, or at least, not compared to other CPUs.

This means that the Threadripper 2990WX was given a rough deal at launch as no one, not even AMD, was aware of the issue. The performance boosts only occur in games, though, and not all areas so there are still some benchmarks and programs that perform poorly on the CPU. However, I'm waiting on a comment from Nvidia on the issue to see if it can nail down what it changed and why the Threadripper 2990WX was so much slower with the pre-399.24 drivers and will report back when it replies.

This has been around since September 11th: https://www.pcper.com/reviews/Graphics-Cards/New-GeForce-Driver-Fixes-Performance-Issue-Threadripper...