A beginners guide on overclocking your CPU

So, you’ve heard of this “overclocking” thing right? Not sure what it is, or afraid of blowing up your PC when doing it? Well, here is a guide on the basics on overclocking for you. To make sure you don’t set anything on fire, or otherwise break any hardware, or anything like that (which would be bad).

So where do we start? Well, here are a few pieces of information you will need to know throughout this guide.

So those are the basic terms you’ll need to know to start. There are a TON more, but for the purposes of this guide (being a very basic how-to) I’ll not get into all the things like LLC calibration, and other settings that more advanced overclocking will implement.

First things first: Install CPUz and a temperature monitoring software of your choice. I usually go with MSI Afterburner, as it has temperature reading for ALL THE THINGS and it’s very accurate, and I typically will also install either AMD Overdrive (on AMD-based systems) or Intel XTU (on Intel rigs). Hwmonitor is also a good monitoring program, although it sometimes doesn't read AMD CPU temps very well. Once you have those set up, and configured with the settings you want, then always keep the temperature monitors on screen or in the background to see what the temps are.

Why do I say this? Because the temps are the biggest factor in whether or not to keep an overclock- if they are okay, then you are set.

What are good temperatures?

Well, that depends greatly but for the most part on AMD systems you want to stay under 60-65* C while under 100% load. On most intel systems, the max you want to hit is 85* C under 100% load of the CPU. These temps will keep your CPU from dying too early, which isn’t an issue most of the time anyway but it will keep the CPU’s from degrading over time as well.

Download a few CPU tests to see if the overclocks will be stable. I usually use Geekbench 4, Cinebench R15, GPUPI, and lastly CPUz Stress Test to test if my overclock is stable. You can also do benchmarks like 3Dmark to test the CPU as well. I typically start off with benches that will hammer the CPU like Cinebench R15 and Geekbench, and then test ones like 3dmark 11 to see if the CPU is also stable during heavy gaming loads, but you can choose which ones you like.

Now that you’ve set up monitoring software and benchmarking tools, comes the part that is more interesting. You will need to restart your computer and boot into the bios, typically by using the delete key or one of the function buttons.

To demonstrate the various settings I’ll use the Sabertooth 990FX R3.0 and FX 8370, however the settings you have may look different if it is a different motherboard. With that being said, the core settings like vcore, frequency, etc, are all universal so I can show you those and how to use them to do basic overclocking.

So, once you are in the BIOS it should look something like this: 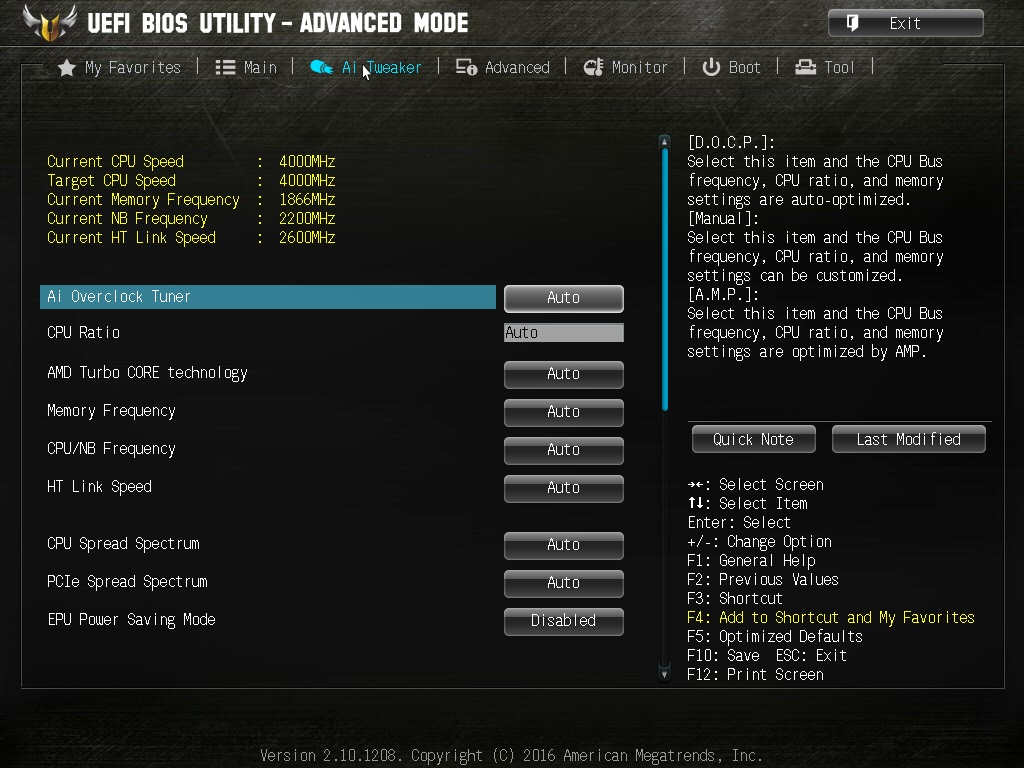 From here you can see the various settings that can be changed. What you then need to do to overclock is switch the overclock settings from Auto to Manual (Asus calls this AI Overclock Tuner, other companies have other names for the same function). This will make it so you are the one that sets the various settings, not any kind of automatic BIOS setting.

Read and take note of what all of the settings are by default. Take particular attention to what the CPU, memory, and the other voltage settings are on your motherboard and write them down- you need these for reference. Also take note of the stock speed of the BCLK, Multiplier, and RAM- so that you know the settings that are guaranteed to work if an overclock fails.

Now that you have taken note of the stock settings, the first thing you should always do is see how far you can get the CPU to run on the stock voltages. All that is required for this is to change the multiplier from (in the case of the FX 8370) the stock multiplier of 20, to a multiplier of 20.5- and then save that and reboot.

If it works and boots into windows, then run the benchmark tools to make sure it is stable. I run them from anywhere between an hour or 12 hours, depending on how sure of stability I want to be. If that works, then repeats the process and raise the multiplier again.

Keep doing the above method, until Windows no longer boots- OR Windows crashes when running one of the benchmarks. Geekbench 4 in particular will crash an unstable system.

When this happens- don’t worry- it’s just the CPU not having enough power. You need to go back into the BIOS and this time look at the volts of the CPU.

Remember those default values that you wrote down earlier? Well, here is where they will come in handy. Look at the default value for the CPU volts, and then raise it by .05v. If you still don’t have stability in benchmarks and stress tests, then raise the volts again by another increment.

You can do this until it is either stable, or the CPU is getting above the earlier mentioned maximum temperatures (60-65C on AMD, 85C on Intel). You typically won’t have to worry about having way too many volts going through the CPU if you have really good cooling. If you have good enough cooling than you should be able to run the volts pretty high without worrying about it, *until* about 1.55V which is about the highest you ever want to run 24/7 on an AMD CPU, and on an Intel CPU, about 1.35 volts is about the most you will want to run for 24/7 use.

So, you have increased the multiplier… and put more volts through the CPU if needed? What next?

Well… that’s about it really. Overclocking is actually, fairly simple as long as you keep the temperatures within the limits, and don’t put a massive amount of volts through the CPU. I’ll be putting out a guide soon going over GPU overclocking as well, so stay tuned for that! If have any feedback, questions, or comments feel free to let me know in the comments! I'm more than willing to help with any overclocking related things, among other things as well.

If you would like you can check out Hwbot, which is a way to compete with other overclockers around the world by trying to get the most out of your hardware. The AMD Red Team has a Hwbot team here: AMD Red Team @ HWBOT   and I am the team captain there, so if you would like to join in go ahead! It's open for anyone. I've written a quick guide already for how to submit to Hwbot here if you'd like to learn how as well you can check it out: A guide for submitting results on Hwbot.org!

Tags (2)
15 Likes
Share
9 Comments
About the Author
Current Active Duty Military, passionate about all things tech (but especially overclocking), and also AMD hardware fan. My first PC was a Phenom ii x3 720 BE rig, and it was epic while I had it! I'm also known as Nik Caven on Twitter/FB/G+. I was also the first person to write an article on the 390x (what later became known as the Fury X) pictures that showed up back in May 2015! Other than that, I really like the community here. Those other companies have nothing like it :D