Sign In Help
Turn on suggestions
Auto-suggest helps you quickly narrow down your search results by suggesting possible matches as you type.
Showing results for
Search instead for
Did you mean:

It is not uncommon to see multiple Microsoft Visual C++ Redistributables on a system that were installed by software programs, through updates, e.g. security updates, or manually by the system administrator. 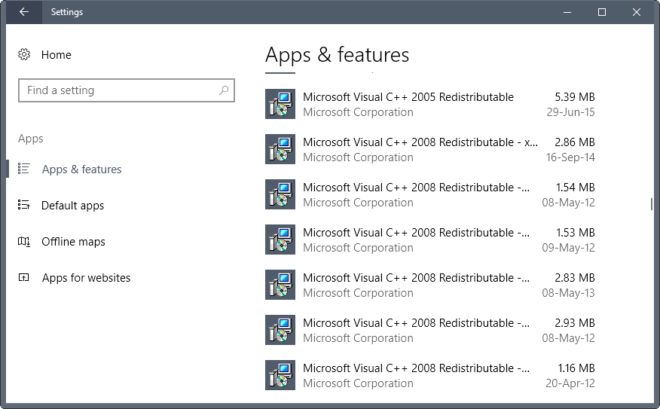 Redistributables are stored in a central location so that any program installed on the system may access the files if required.  You can check out our detailed guide on Visual C++ Redistributables here for additional details.

Microsoft changed the system significantly with the release of the Microsoft Visual C++ Redistributable for Visual Studio 2015, 2017 and 2019. A baseline image is provided for these redistributable packages so that it is no longer necessary to install different versions separately on target systems.

This is different from all previous Visual C++ versions, as they each had their own distinct runtime files, not shared with other versions.

Older Visual C++ Redistributable packages for Visual Studio still need to be downloaded and installed separately, or delivered as part of a program's installation process.

The Visual C++ All in One Installer is also useful when it comes to installing redistributable packages on Windows systems.

The Universal C Runtime is a step in the right direction. While it does not take care of older C++ Redistributable packages, it did so starting with the release of the Visual C++ 2015 Redistributable.

So how does this help the end user if can still install the older ones? Doesn't replace newer ones, but you still get an install of the older one. So when installing games, it sounds like you will still get VC++ install bloat. In the future, it should be limited hopefully to just one VC++ install forever.

This all has roots in the good old days of windows (aka 3.0 and 3.1). Back in those days you had the common dialog .dlls and such, and installing an application could be a nightmare because one app would use version 1.1 while another app would use version 1.12, and those two versions could not be used/installed side by side, as everything was dumped in the windows system directory.

Thus, MS came up with a way to version things like we see today, and it's a much better solution than dumping everything in one directory and hoping for the best. But as we see, every version creates yet another install entry, and the end user must be diligent to remove older versions if they really are not needed. I periodically uninstall the lower versions for the same VC++ redistrib year.

Still going to have a "problem" when installing older games as they will want to install VCRest by default, even if they have "modern" installers from GoG, Steam, or what have you.

Oh..no no no! This is Microsoft doing this...how can it go wrong? No biscuit for you !

black_zion
In response to kingfish
MVP Visual C++ runtimes etc should have been included with Windows across the board so that the mess would never have been present in the first place. Same for DX components etc.

Unwise in my opinion as many have slow internet to this day.