Here is the issue, shadows don't work in Everquest and I noticed some people have been having other problems with blender and maya.

here's a link to the discussion

but with the 32 bit version the launcher will not work

So I guess I am out of luck unless I compile my own wine or run this under linux with wine there. I don't really feel like pestering anyone, its just sad there is no built in backwards compatibility to the AMD Radeon drivers.

Going to chalk it up to Microsoft wanting to sell more dx 12 dev kits, as this could be easily fixed with a native update to the d3d libraries to call the newer vulkan spec, but its also not Microsoft responsibilityto make sure AMD is fully supported... ugh. I feel like a rube with just enough knowledge to know what is broken but not enough ability to fix it. I would voluntarily create a solution and give it to DBG/Darkpaw if I had the skills. There are a lot of options available without putting the calls in the eqgame engine or modifying the game itself in any way.

I don't blame anyone at all for no longer wishing to support old graphics APIs from a decade ago. It is what it is. Thank you so much to those who have worked on this over at DBG, AMD, and MS, for getting this to work at all on my modern computer! 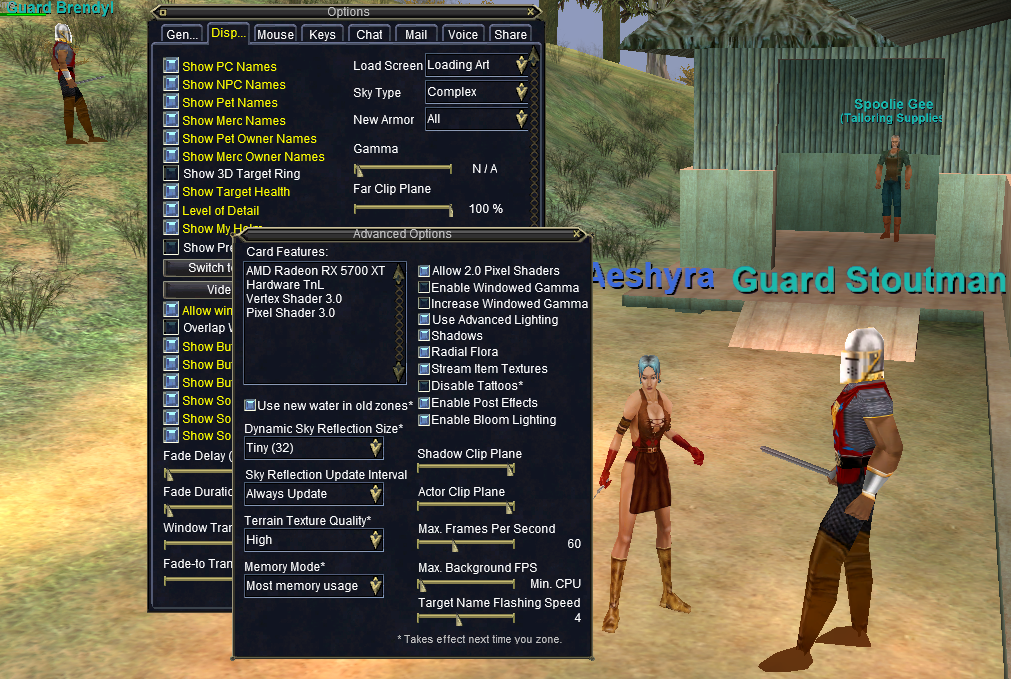 There are ways of running wine builds natively under windows with cgywin but i am not very tech savvy not sure i want to go through all that effort over broken shadows... they are sooo cool though!

Also the Vega 8 is a great card. It is running different firmware than the R7 (RX 5700 + series). So your card supports native dx3d9 calls.

Is essentially my thoughts on the issue.

These games work great under linux and wine but run poorly on native windows 10. I don't know what to say other than, I wish, either microsoft would implement an update to their API or AMD would support direct3d shadow rendering.

As it is the drivers run smoothly and the game does not crash. This I am sure affects many users more than just me.

Thanks for taking the time to consider this issue. I hope it helps provide a perspective that allows you to provide a better product to your loyal customers!

Windows 10 doesn't even run Direct X 9 natively it uses an emulation type wrapper to process it.

My guess is that with the architectural changes in Navi AMD cards who truly used to have the best support of older games IMHO now have the worst. No idea if AMD ever plans to address this.

You can contact AMD with your thoughts here: https://www.amd.com/en/support/contact-email-form

This content has been marked as final. Show 12 comments