The Microsoft .NET Framework 4.8 is a new version of Microsoft's popular framework. It includes new features, fixes and improvements compared to previous versions.

The changelog on the Microsoft Docs website highlights new features and changes in the new release. The log is quite technical in nature and intended for programmers who use the framework more than it is for Windows users and administrators who install it.

Other changes include an updated Zlib library that is used for data compression, and a new ServiceHealthBehaviorWCF service that extends IServiceBehavior. 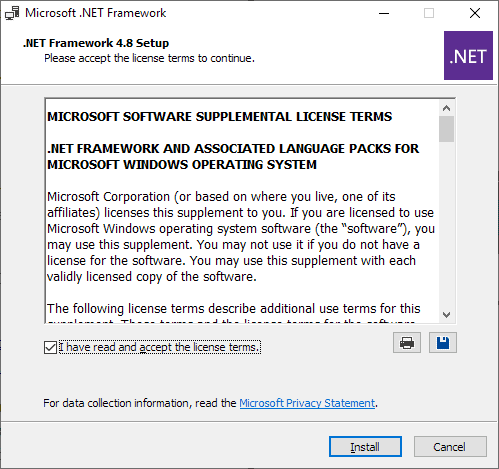 The .NET Framework is offered as a Web and Offline installer. The core difference is that the Web Installer requires an active Internet connection during installation as it needs to download components from Microsoft servers.

The .NET Framework 4.8 offline installer is larger in size but requires no Internet connection as it includes all the components:

Check out the following link to download official .NET Framework 4.8 Language Packs for offline installation. The language packs include translated error messages and user interface text; the text is displayed in English if no language pack is installed. Microsoft lists 23 different language packs currently that include languages such as Chinese, Arabic, German, Spanish, Italian, Japanese, Dutch, Portuguese and Russian.