Wi-Fi 6 is the next-generation wireless standard that’s faster than 802.11ac. More than speed, it will provide better performance in congested areas, from stadiums to your own device-packed home. It’s coming in 2019.

Yes, Wi-Fi now has version numbers! Even those old confusing Wi-Fi standard names like “802.11ac” have been renamed to user-friendly names like “Wi-Fi 5.”

Here are the versions of Wi-Fi you’ll  be seeing:

Older versions of Wi-Fi aren’t widely in use and aren’t officially being branded. But, if they were, here’s what they’d be called: 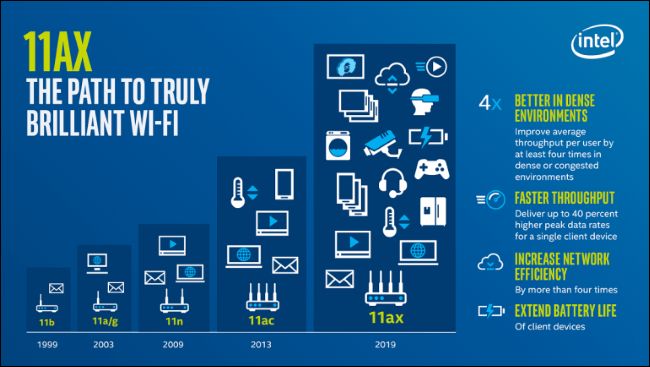 As usual, the latest Wi-Fi standard offers faster data transfer speeds. If you’re using a Wi-Fi router with a single device, maximum potential speeds should be up to 40% higher with Wi-Fi 6 compared to Wi-Fi 5.

Wi-Fi 6 accomplishes this through more efficient data encoding, resulting in higher throughput. Mainly, more data is packed into the same radio waves. The chips that encode and decode these signals keep getting more powerful and can handle the extra work.

This new standard even increases speeds on 2.4GHz networks. While the industry has shifted to 5GHz Wi-Fi for less interference, 2.4GHz is still better at penetrating solid objects. And there shouldn’t be as much interference for 2.4GHz as old cordless telephones and wireless baby monitors are retired.

A new “target wake time” (TWT) feature means your smartphone, laptop, and other Wi-Fi-enabled devices should have longer battery life, too.

When the access point is talking to a device (like your smartphone), it can tell the device exactly when to put its Wi-Fi radio to sleep and exactly when to wake it up to receive the next transmission. This will conserve power, as it means the Wi-Fi radio can spend more time in sleep mode. And that means longer battery life.

This will also help with low-power “Internet of Things” devices that connect via Wi-Fi.

Wi-Fi tends to get bogged down when you’re in a crowded place with a lot of Wi-FI enabled devices. Picture a busy stadium, airport, hotel, mall, or even a crowded office with everyone connected to Wi-Fi. You’re probably going to have slow Wi-Fi.

The new Wi-Fi 6, also known as 802.11ax, incorporates many new technologies to help with this. Intel trumpets that Wi-Fi 6 will improve each user’s average speed by “at least four times” in congested areas with a lot of connected devices.

This wouldn’t just apply to busy public places. It could apply to you at home if you have a lot of devices connected to Wi-Fi, or if you live in a dense apartment complex.

You don’t really need to know the details. A Wi-Fi 6 access point with a Wi-Fi 6 device will work better. But here’s what’s going on under the hood:

Wi-Fi 6 can now divide a wireless channel into a large number of subchannels. Each of these subchannels can carry data intended for a different device. This is achieved through something called Orthogonal Frequency Division Multiple Access, or OFDMA. The Wi-Fi access point can talk to more devices at once.

Wireless access points near each other may be transmitting on the same channel. In this case, the radio listens and waits for a clear signal before replying. With Wi-Fi 6, wireless access points near each other can be configured to have different Basic Service Set (BSS) “colors.” This “color” is just a number between 0 and 7. If a device is checking whether the channel is all clear and listens in, it may notice a transmission with a weak signal and a different “color.” It can then ignore this signal and transmit anyway without waiting, so this will improve performance in congested areas, and is also called “spatial frequency re-use.”

These are just some of the most interesting things, but the new WI-Fi standard also includes many smaller improvements. Wi-Fi 6 will also include improved beamforming, for example.

When it comes to buying a new device, you won’t be digging through the spec sheet and trying to remember whether 802.11ac or 802.11ax is the latest standard. The device manufacturer can say it has “Wi-Fi 6” or “Wi-Fi 5.”

You will also start seeing a “Wi-Fi 6 Certified” logo on devices that have gone through the Wi-Fi Alliance’s certification process. Previously, there was a “Wi-Fi Certified” logo that didn’t tell you what generation a product was from unless you looked at the specifications.

These Wi-Fi 6 routers should hopefully support WPA3 for easier secure connections to Wi-Fi networks, too, but WPA3 support is not required.

When Will You Get It? 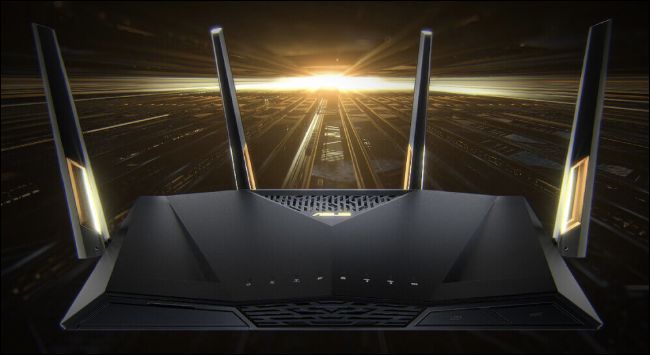 ASUS has announced its RT-AX88U router. It incorporates some 802.11ax technologies but doesn’t support the final standard, which isn’t finished yet.

Some routers may already advertise “802.11ax technology,” but Wi-Fi 6 isn’t finalized and here yet. There also aren’t any Wi-Fi 6 client devices available yet, either.

The Wi-Fi Alliance expects the standard to be finalized and hardware to be released sometime in 2019. You shouldn’t even have to think of it too much—in the future, new routers, smartphones, tablets, laptops, and other Wi-Fi-enabled devices will just come with this technology.

As always, both the sender and the receiver need to support the latest generation of Wi-Fi for you to gain the advantages. In other words, if you want Wi-Fi 6 performance on your phone, you’ll need both a wireless router (access point) and a smartphone that supports Wi-Fi 6. If you connect a laptop that only supports Wi-Fi 5 to your Wi-Fi 6 router, that particular connection will operate in Wi-Fi 5 mode. But your router can still use Wi-Fi 6 with your phone at the same time.

We’re thrilled about the version numbers. It’s a simple, easy change that should have been made a long time ago. It should make it much easier for normal people to understand Wi-Fi. After all, many people can get faster Wi-Fi speeds by upgrading their home routers—but not everyone knows that.

We hope most companies will quickly get on board with the new naming scheme.

Wi-Fi 6: What’s Different, and Why it Matters