The day had finally arrived. I held the culmination of years of tireless efforts by AMD’s talented engineers in my hand. Somehow I managed to make it down to AMD’s South Austin campus and back during my lunch hour that day. Absolutely worth skipping lunch in order to bring home the multithreaded monster that is Ryzen! The 1800X itself, 16 GB of Corsair Vengance LPX DDR4, and the MSI Titanium X370 were graciously provided to me by AMD. The opinions expressed here are my own. 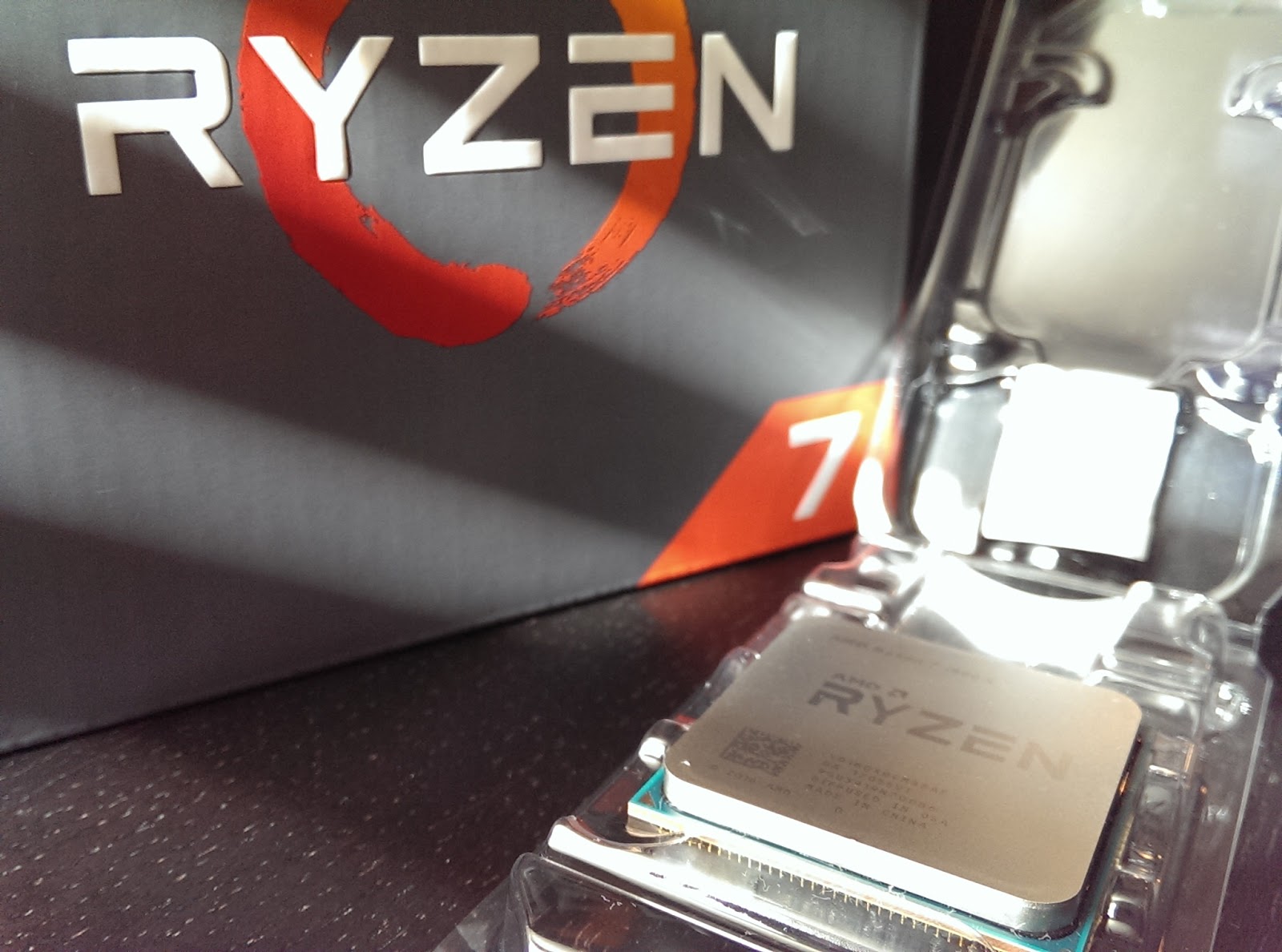 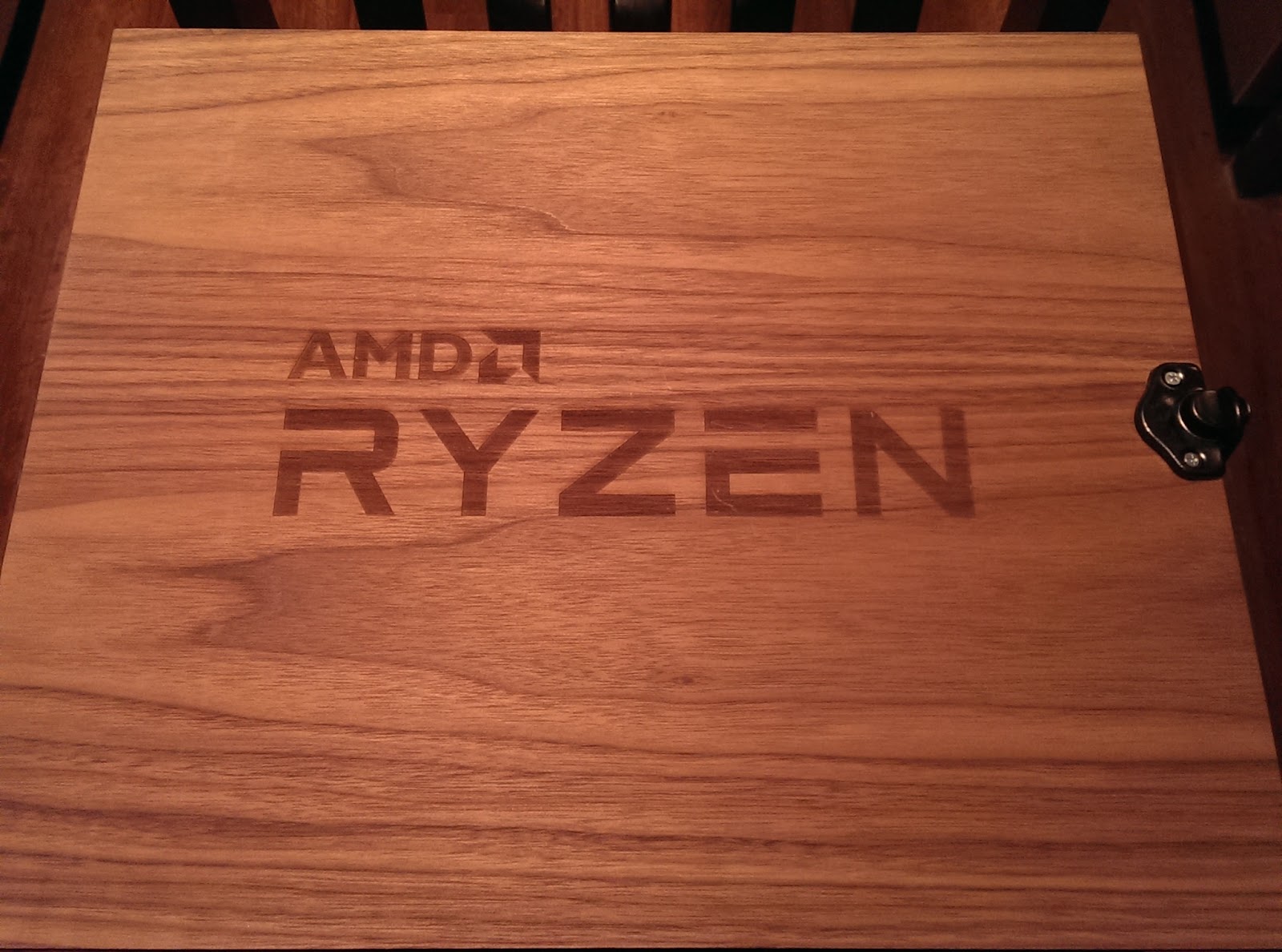 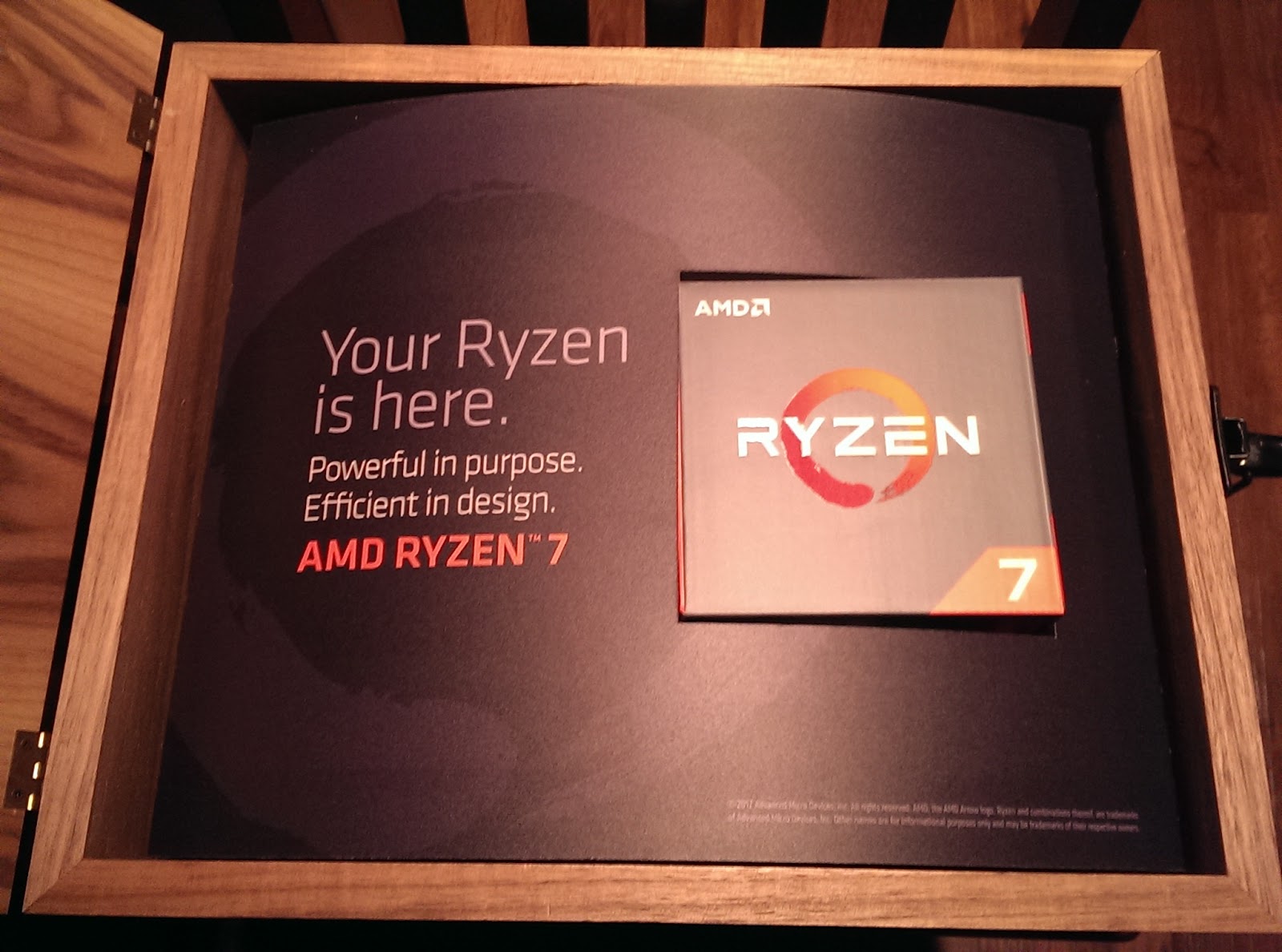 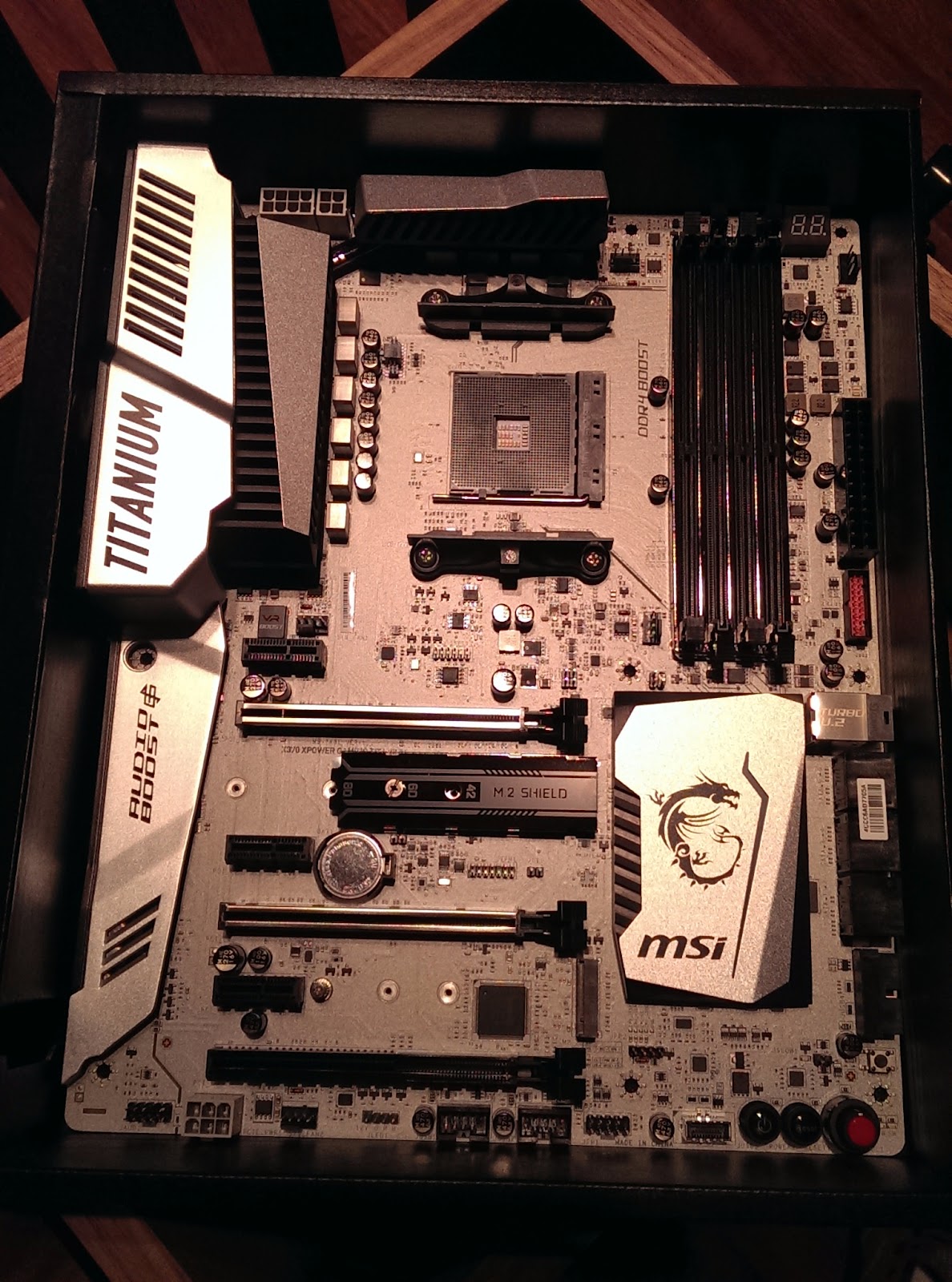 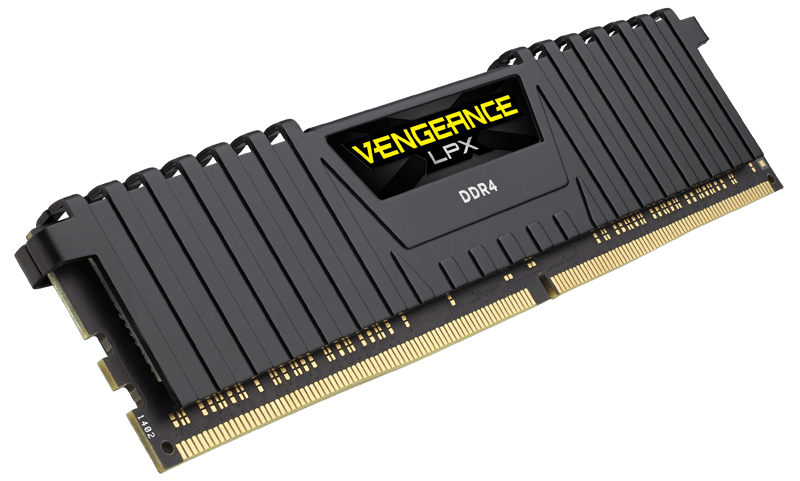 Now that I had the foundation of the system, fleshing out the rest of it was in order. The chassis I opted for was the Rosewill Cullinan tempered glass PC case. However, the blue LED fans that it came with weren’t quite what I was looking for. 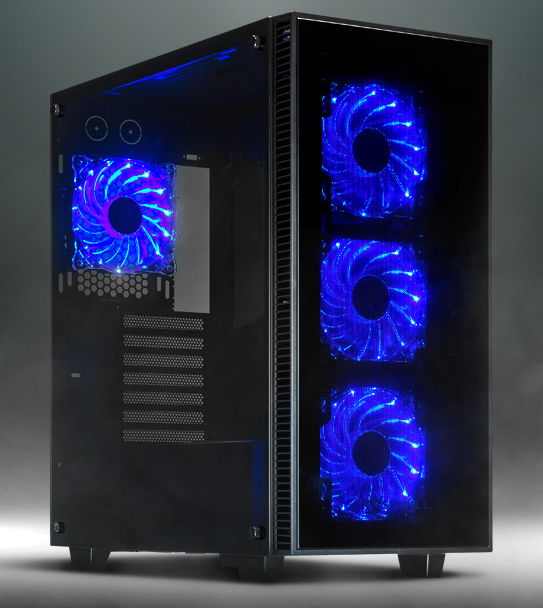 Trying to stay with the orange/red Ryzen logo motif, I picked up a batch of orange fans by Apevia. 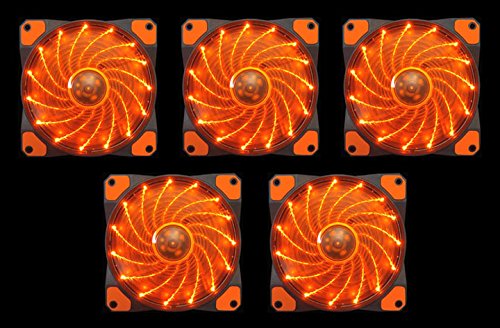 Next, for the power supply I chose the Seasonic Prime Titanium series 850 watt unit. I already had the Titanium motherboard- it seemed only fitting the system should have a Titanium PSU powering it. With a 10-year warranty and lots of modded cables available, it seemed like the natural choice. 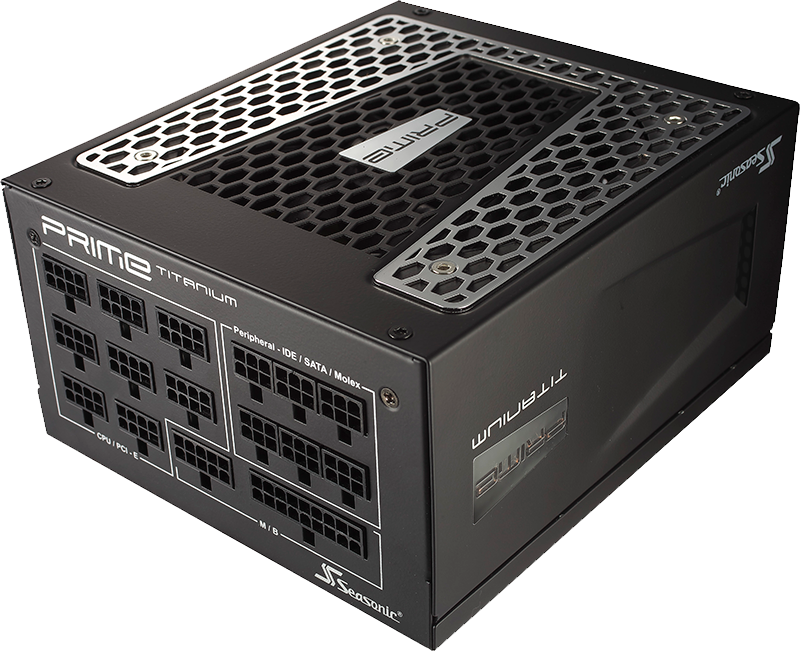 Almost a shame it’ll wind up hidden underneath a shroud.

Speaking of cables-- I found the perfect black/white pattern of replacement PSU cables by Cablemod.com at Newegg: 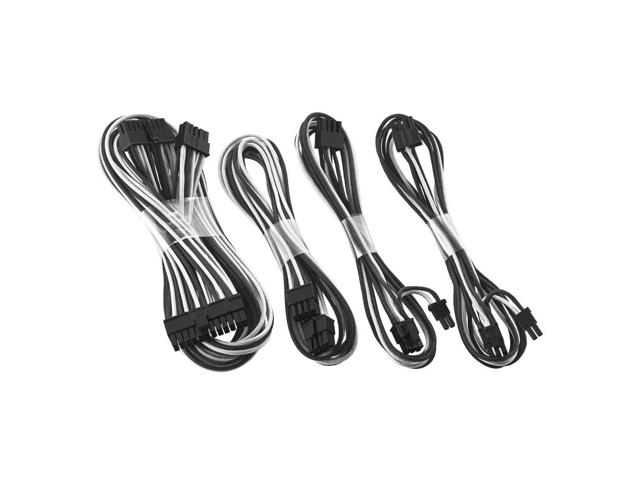 For storage, I decided on a fairly small (250 GB) but very fast Samsung 960 EVO NVMe PCI-Express SSD. You won’t see it in most of the photos- it is quite well-hidden under the GPU. 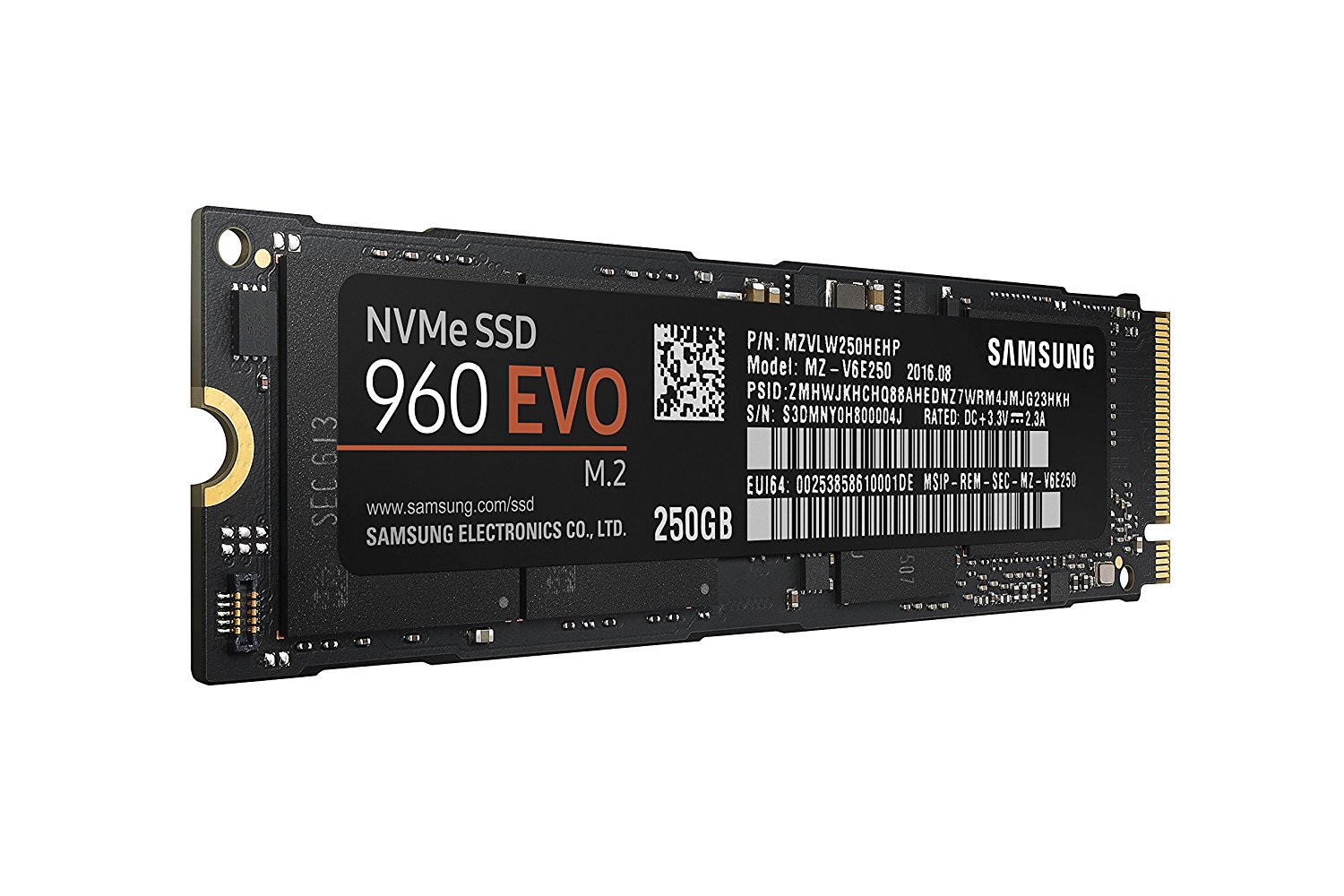 Lastly, but certainly not least importantly, my CPU cooler of choice was the MSI Core Frozr L-- an absolute beast of a heatsink/fan combo. It weighs in at 2 lbs.! 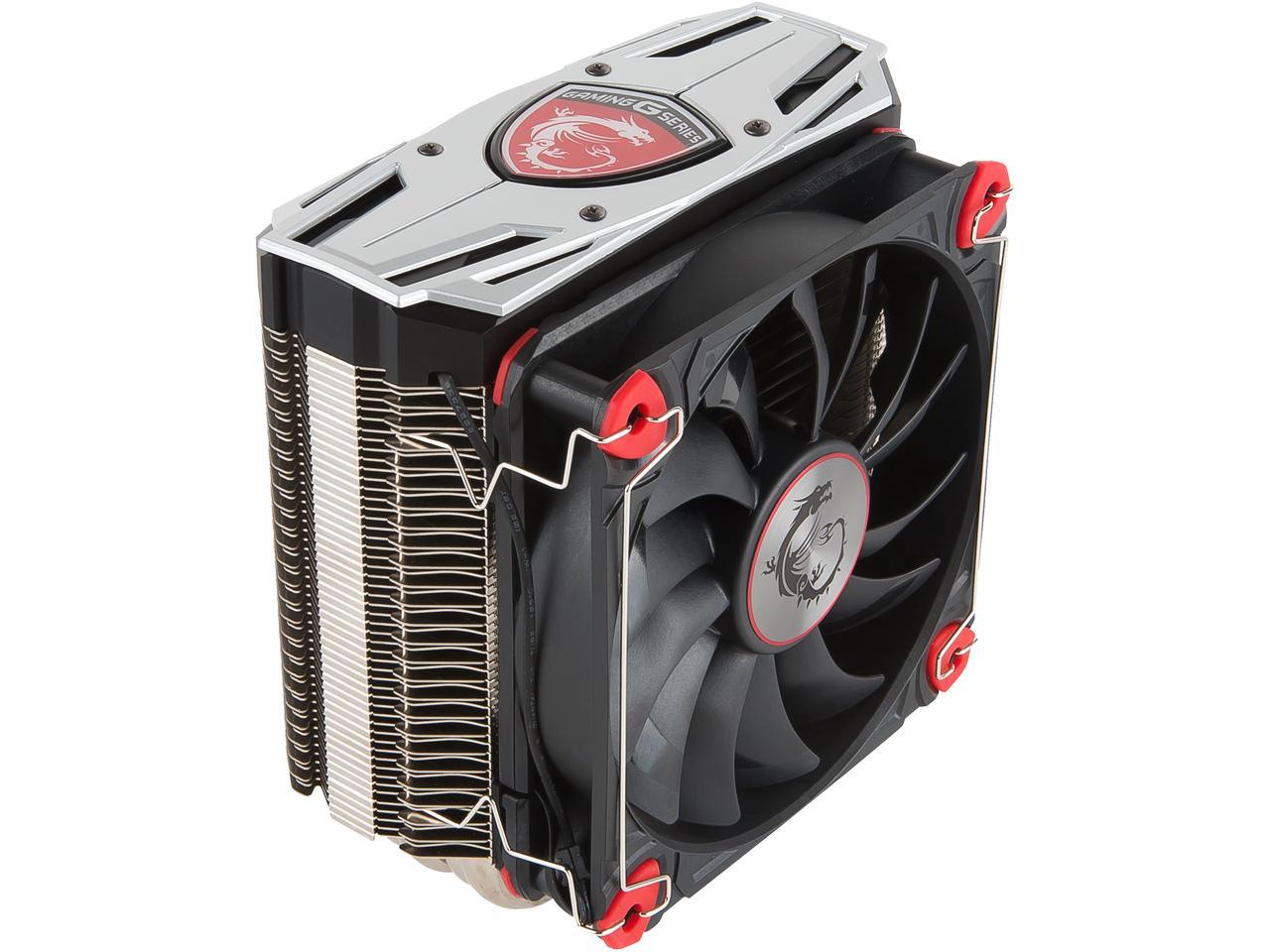 At this point I might as well make it a full MSI build, so I’ll be moving my MSI RX 480 over and using it with Ryzen. My current monitor is 1080p, so it’ll be plenty of performance. 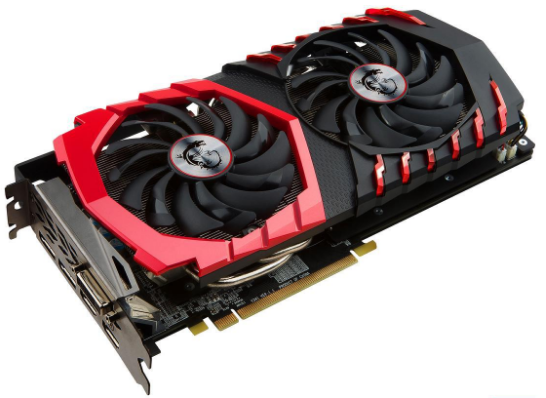 On to the build: 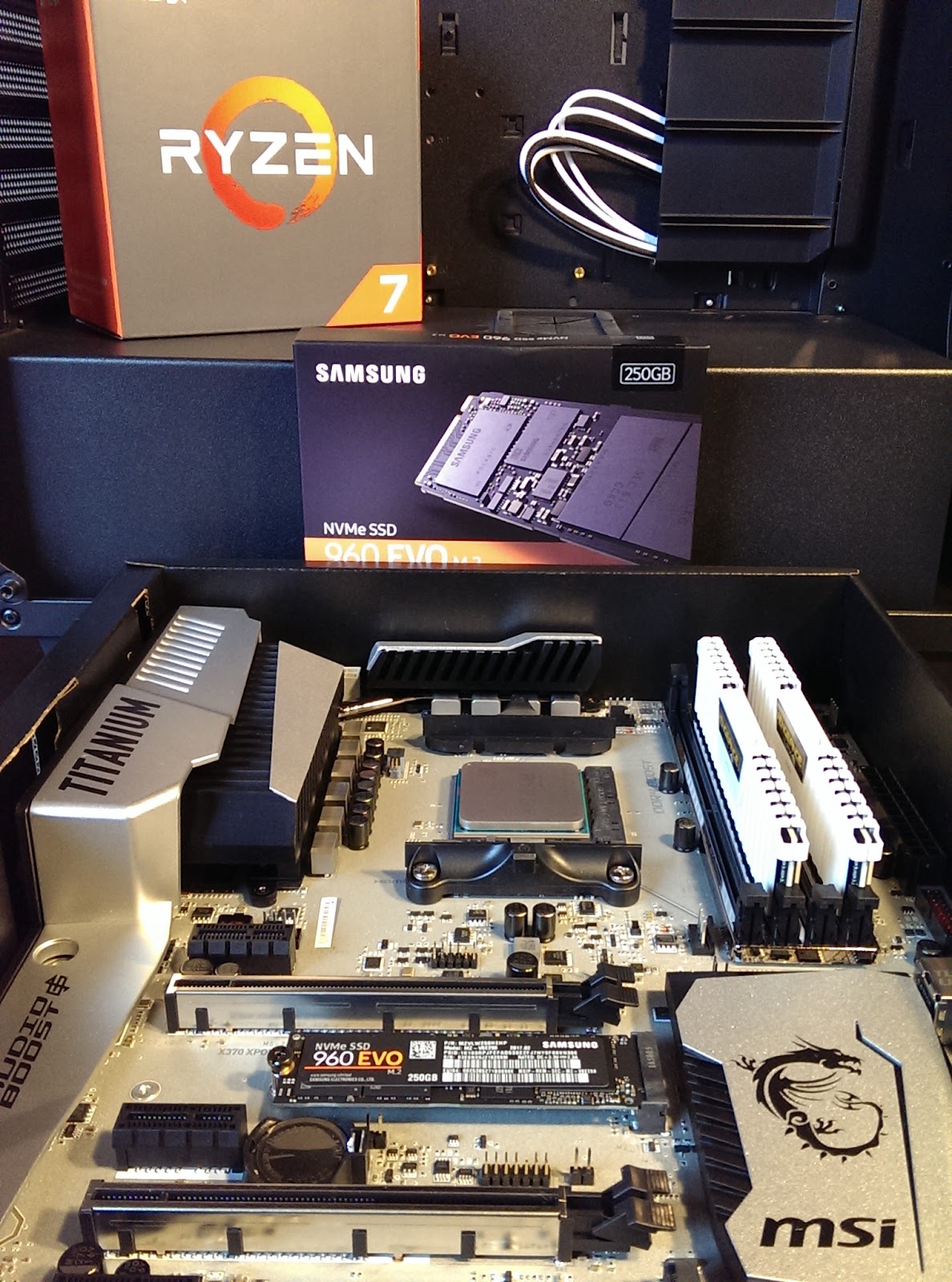 A bit of a nuisance: Apevia’s fans look great. Their stickers? Not so much. 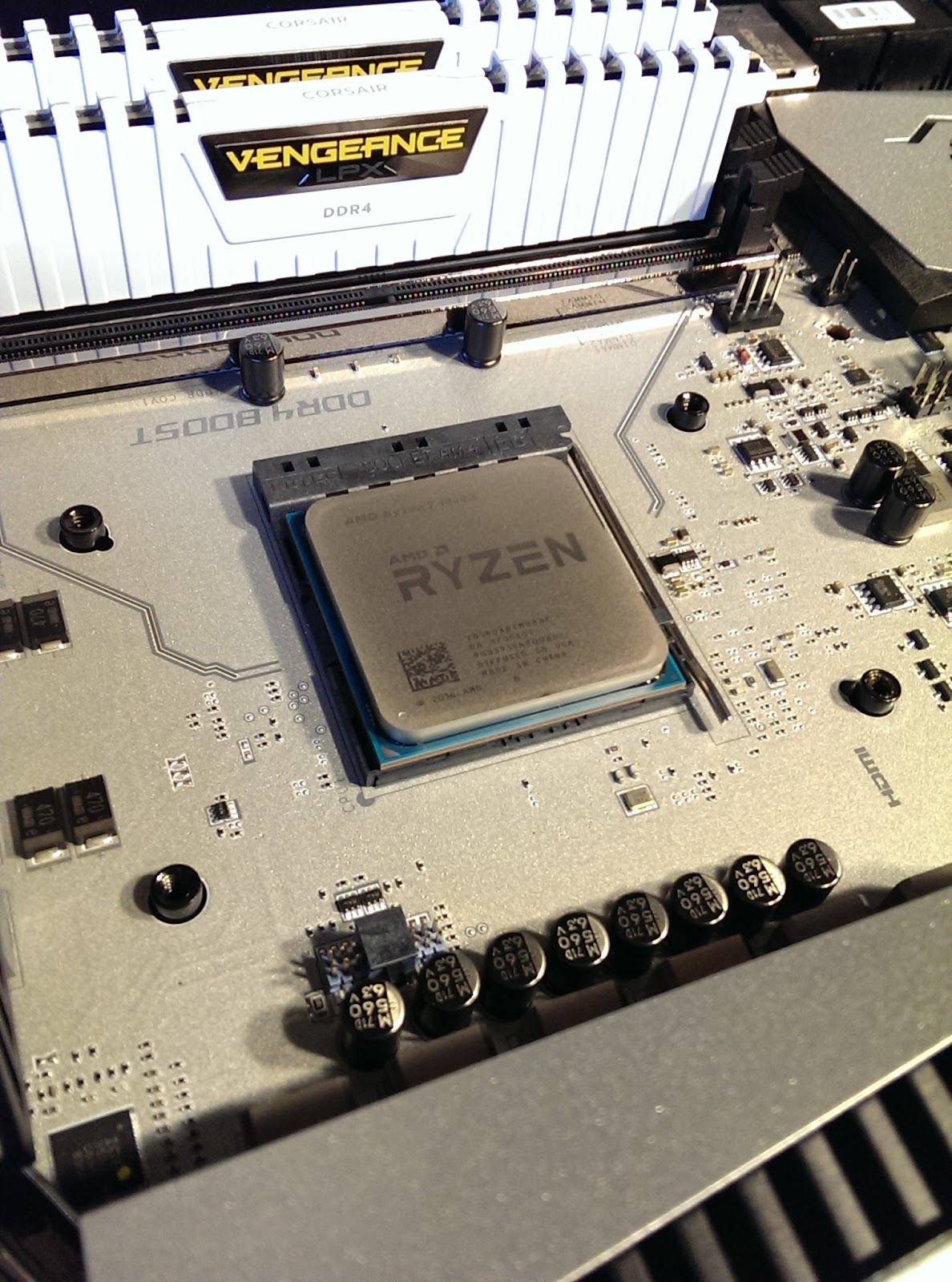 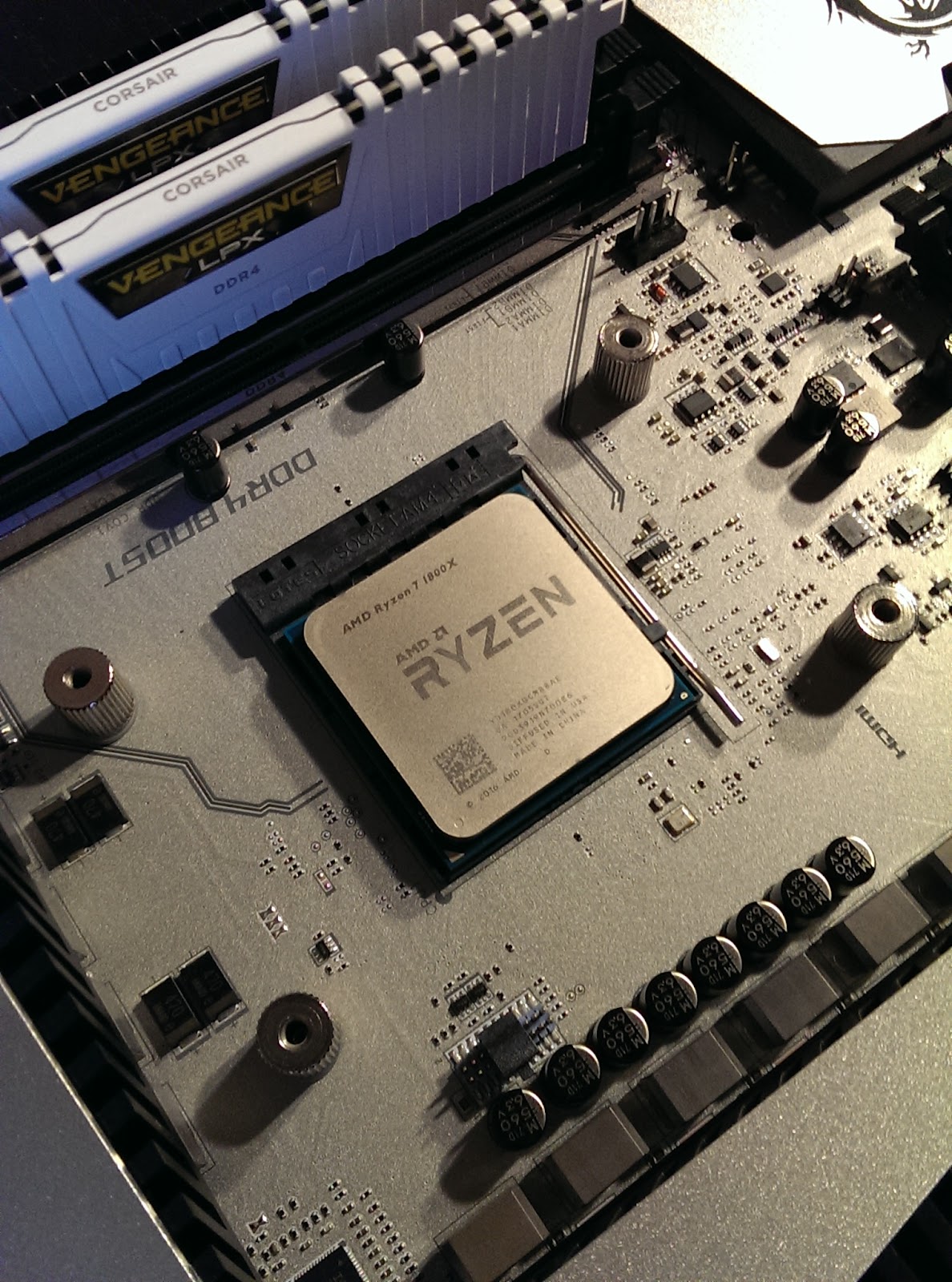 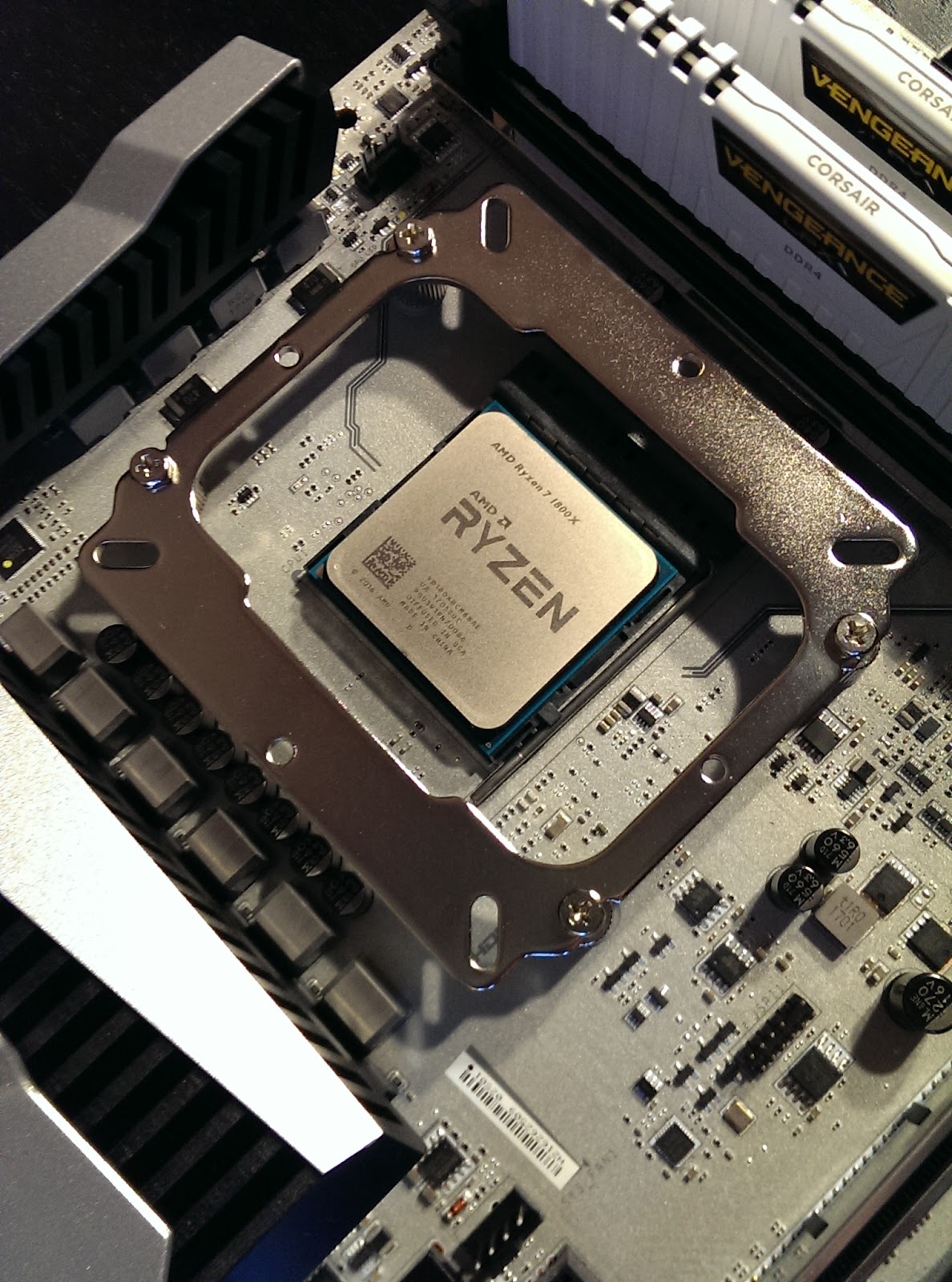 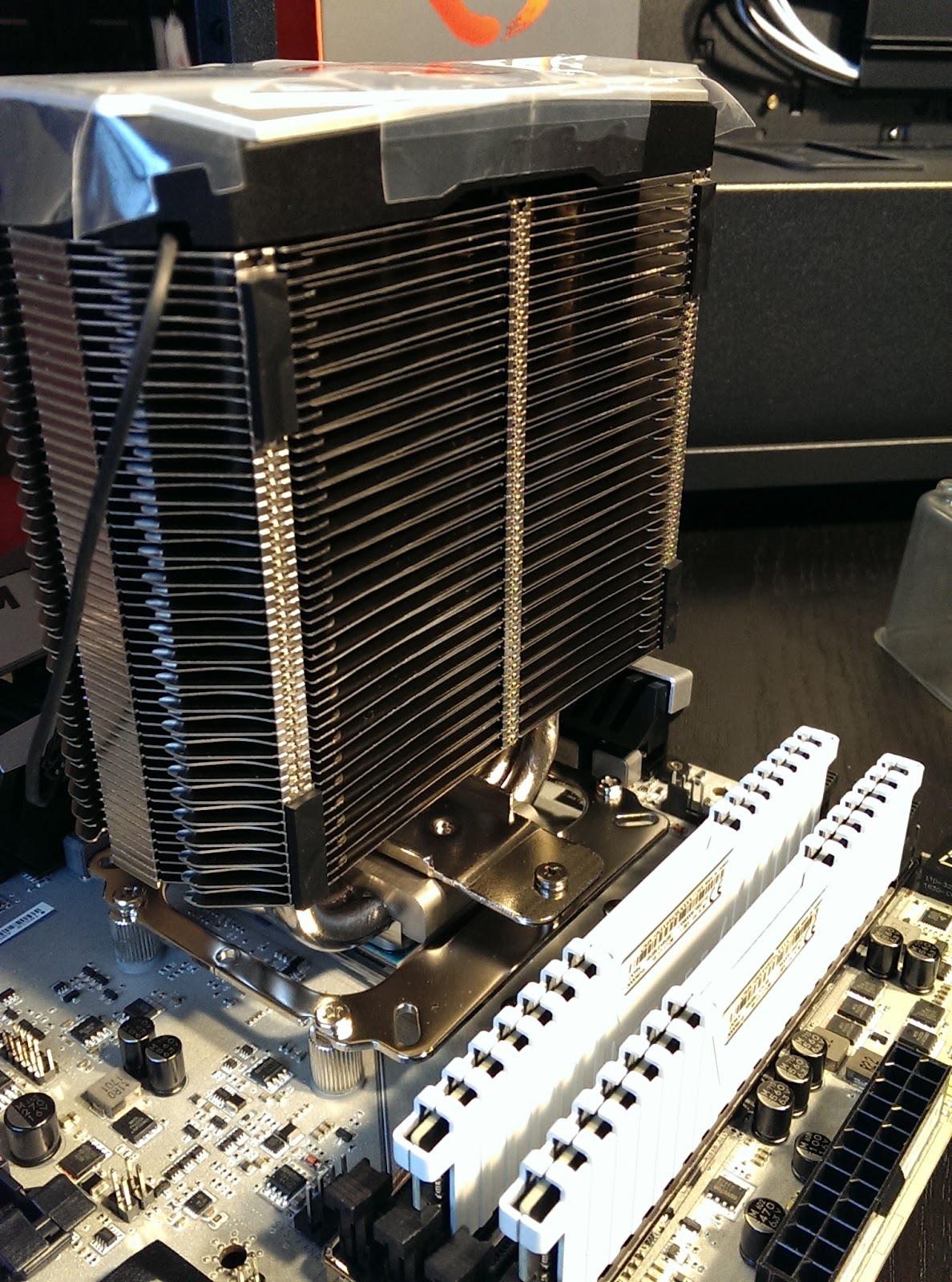 In retrospect, this motherboard and chassis combination isn’t ideal. A few things led me to conclude this. Firstly, the hole in the PSU shroud isn’t large enough to fit a 6-pin PCIe connector through it. The MSI Titanium has such a socket on the bottom of the board to supply extra power for GPU overclocking. I was able to work around this by painstakingly removing each of the power pins from the connector, threading them through the hole, and then connecting them on the other side. The method I used involved two staples and a lot of patience- a process I’d prefer to not repeat. 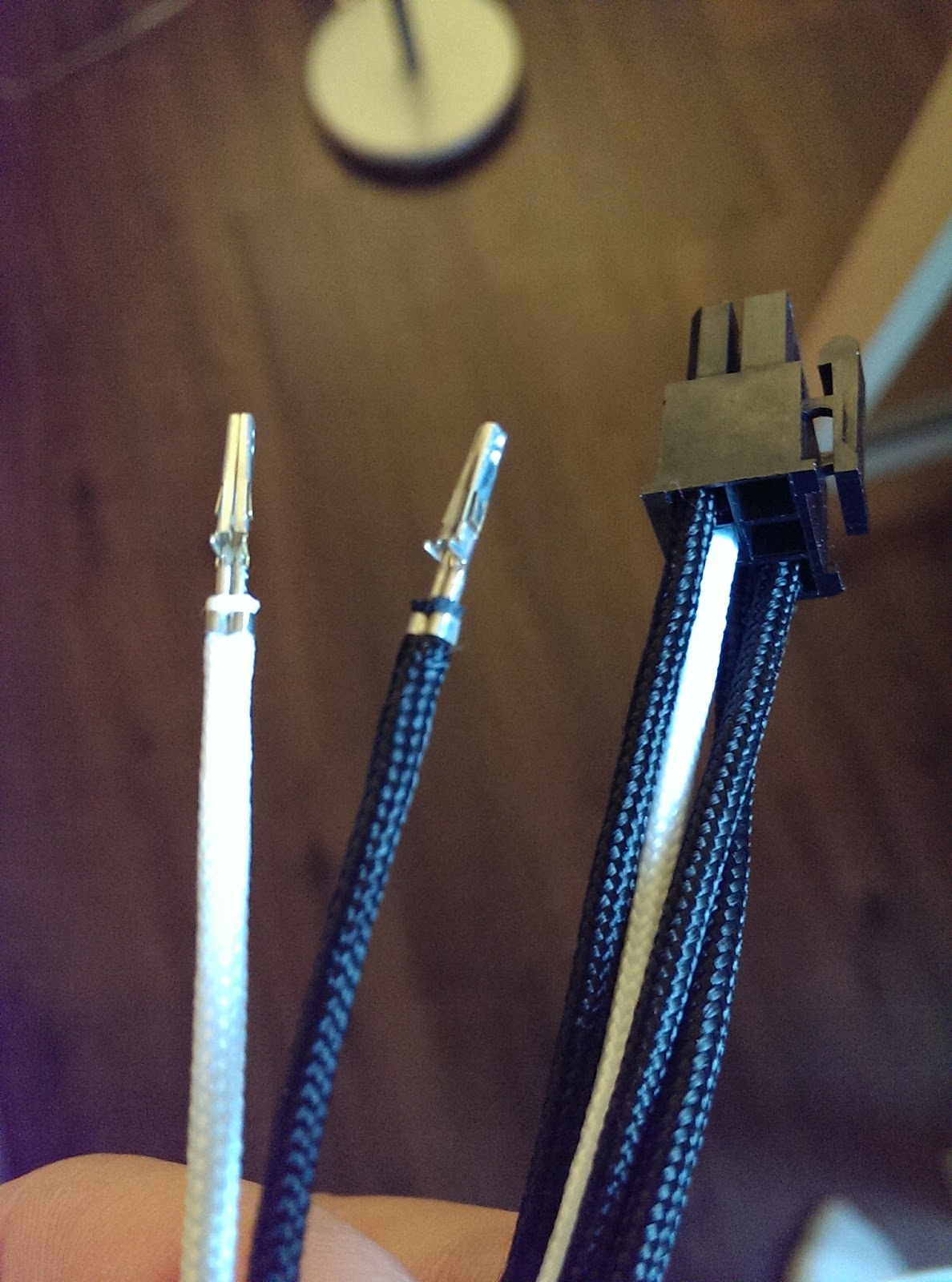 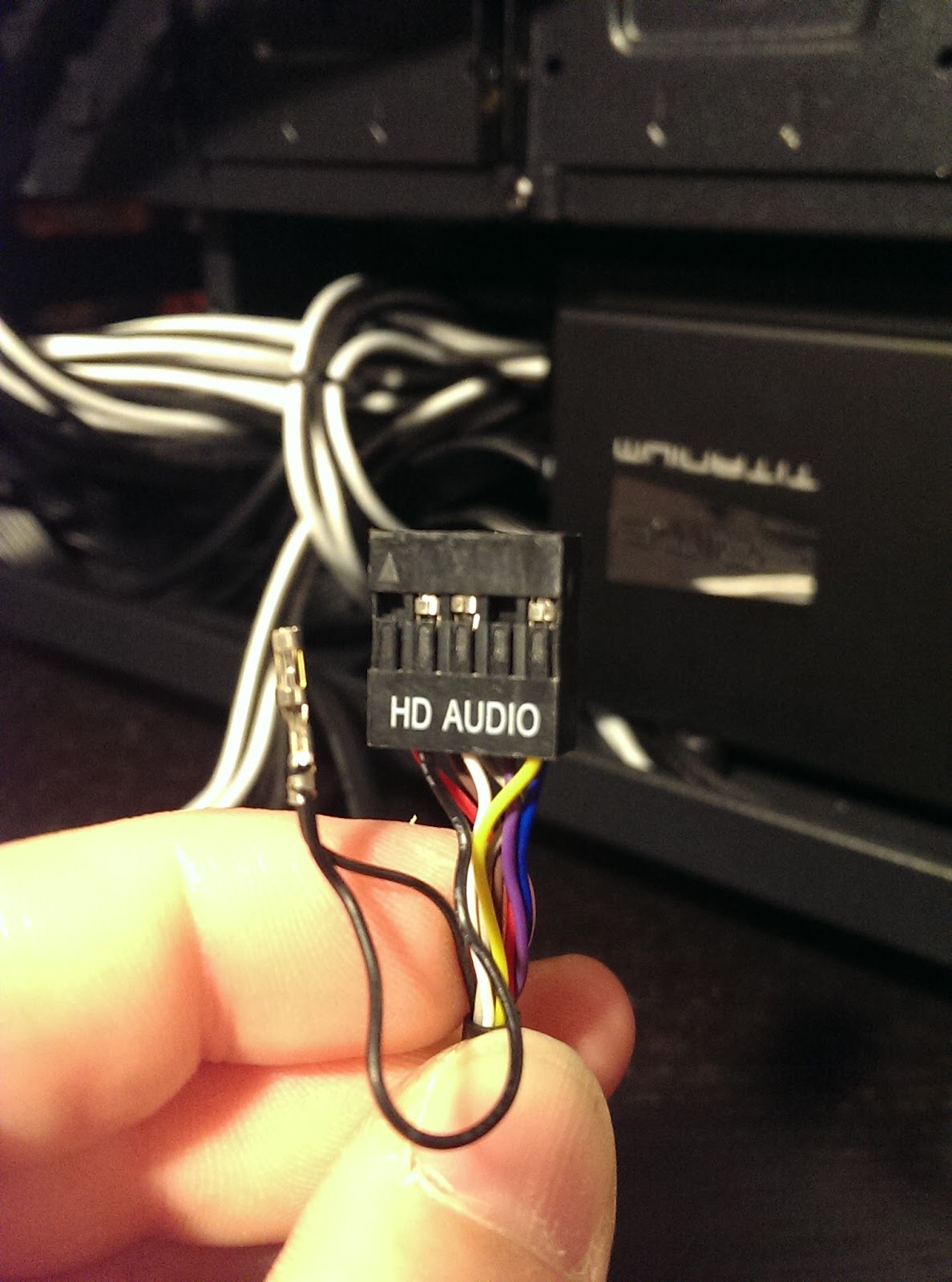 It turns out the PCIe power cable wasn’t the only cable I had to de-pin. There was no room to get the audio cable connector through once the power cable was in, so I had to repeat the process for it as well. Fun.

The revenge of the PCIe power port! 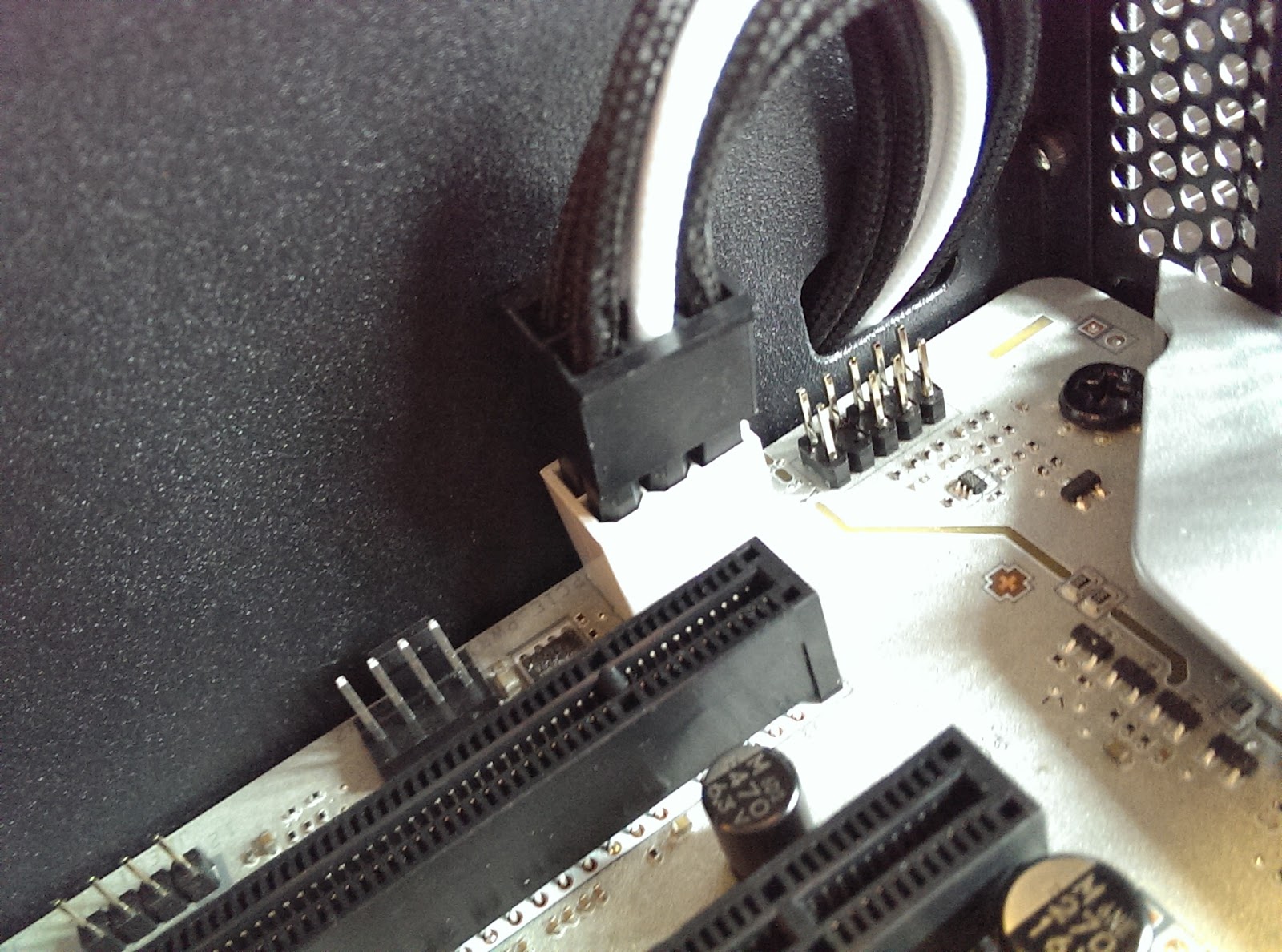 I thought victory was mine after getting the cable through that hole. Not so fast! So little clearance at the bottom of the motherboard, I had to remove the board to plug in the PCIe connector.

The final challenge was getting the graphics card inserted in the slot. The design of the Cullinan’s slot cover could use a bit of a revamp to allow for larger cards. I managed to get it installed, but there was definitely some anxiety involved as I worried about applying too much force on the RX 480. After all of these challenges, the only cable management remained before I began installation of Windows.

I’m really quite pleased with how the system turned out, and I hope you’ll agree that I gave my Ryzen 1800X the home it deserves. 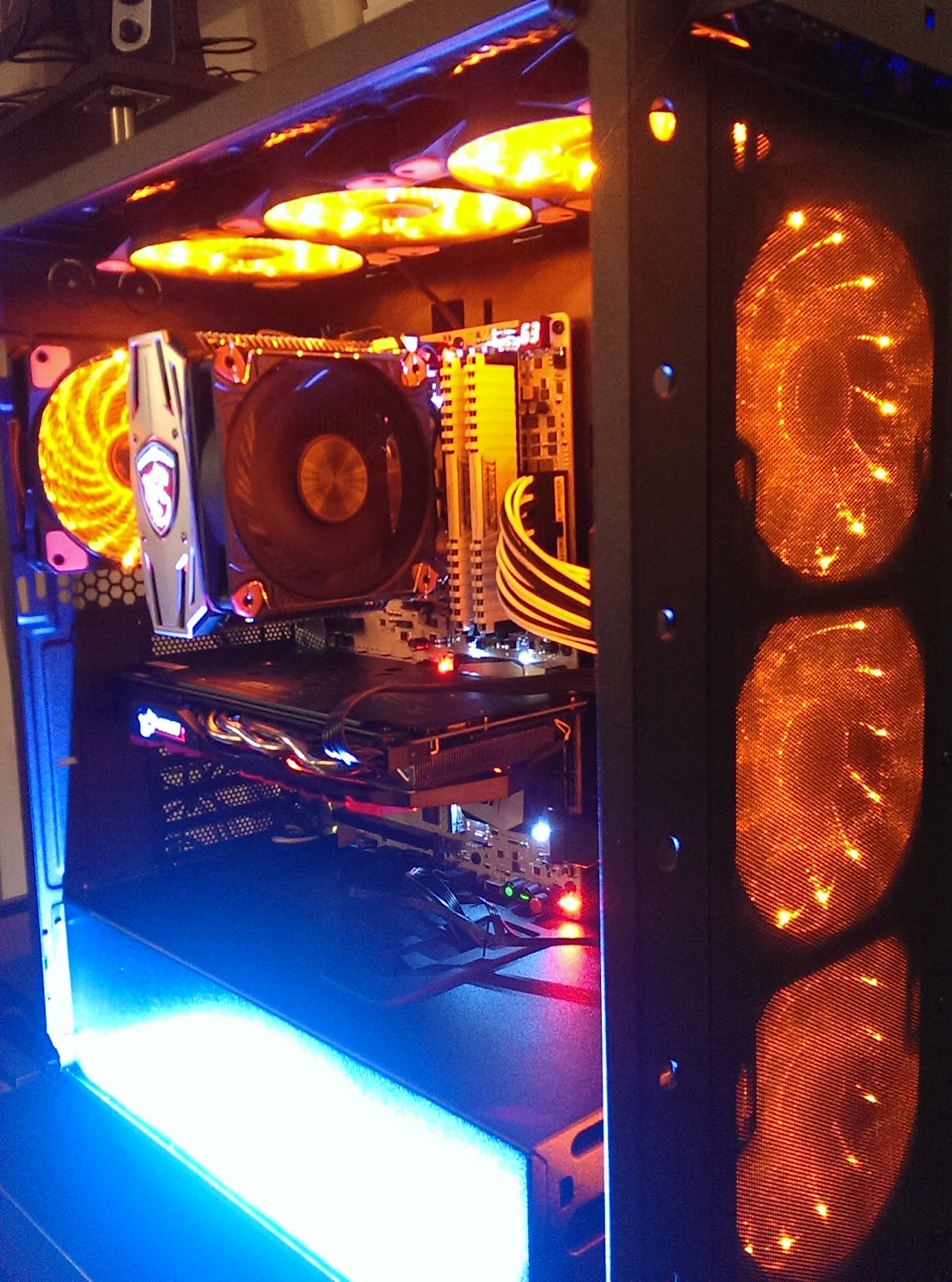 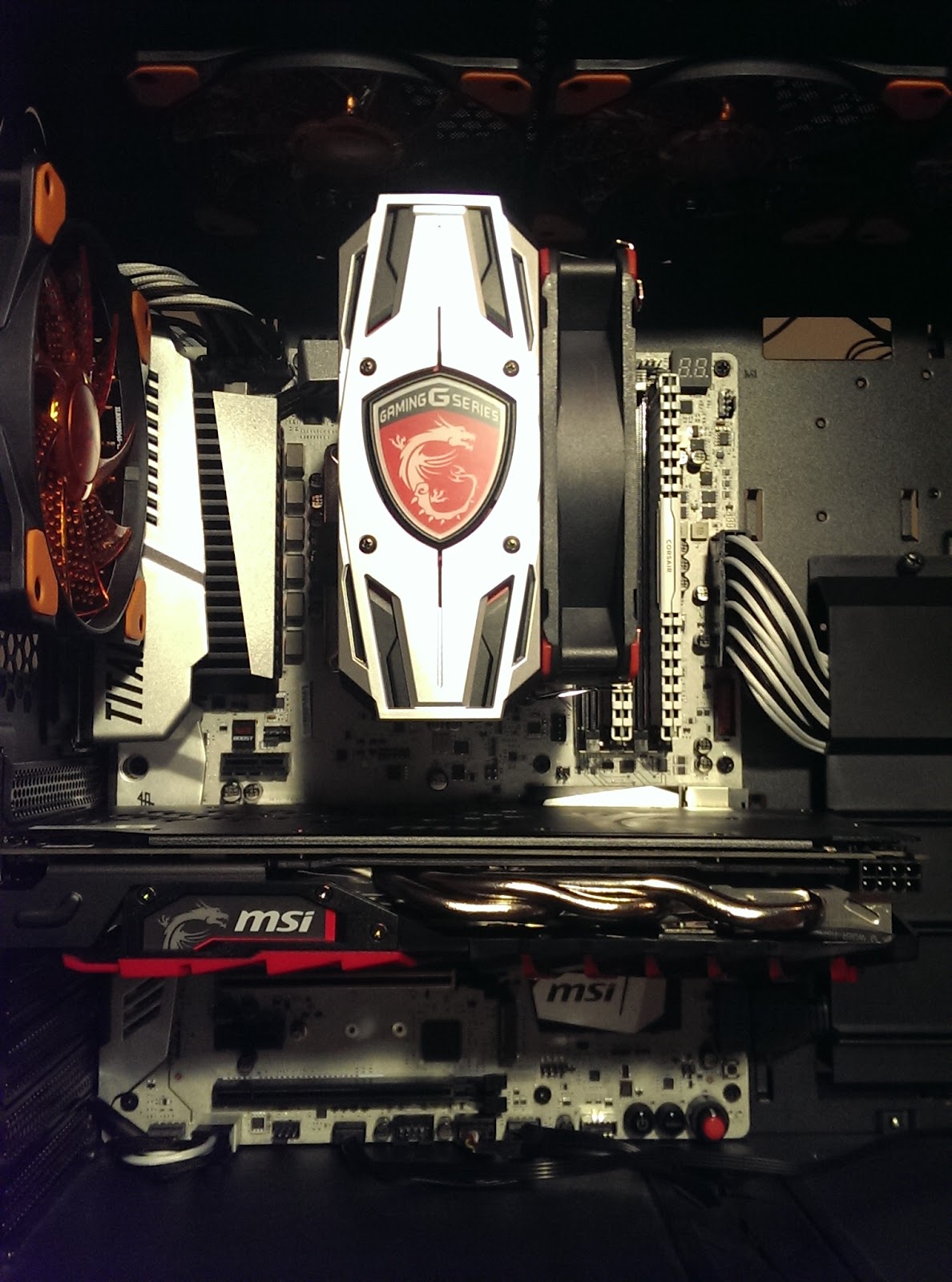 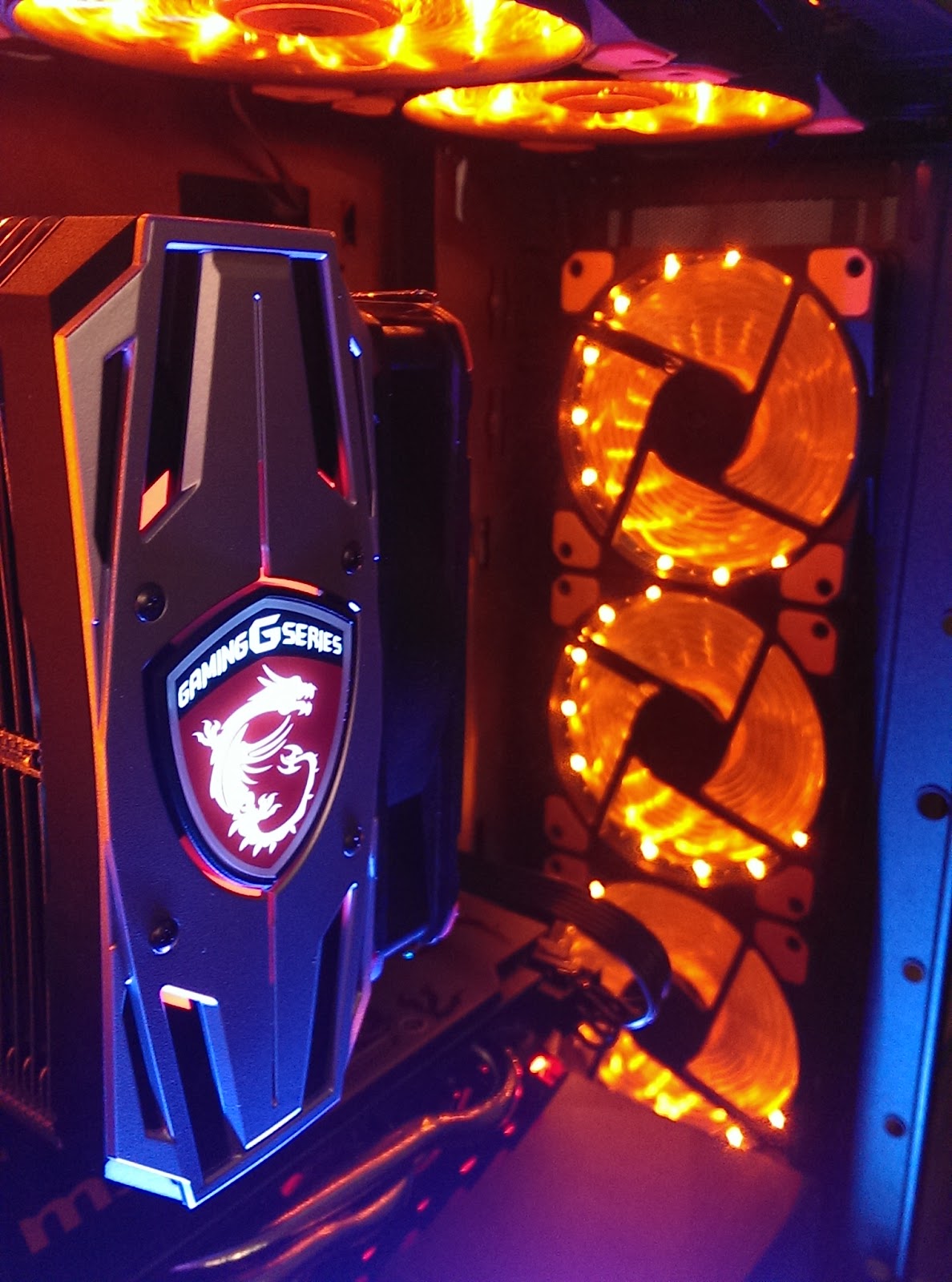 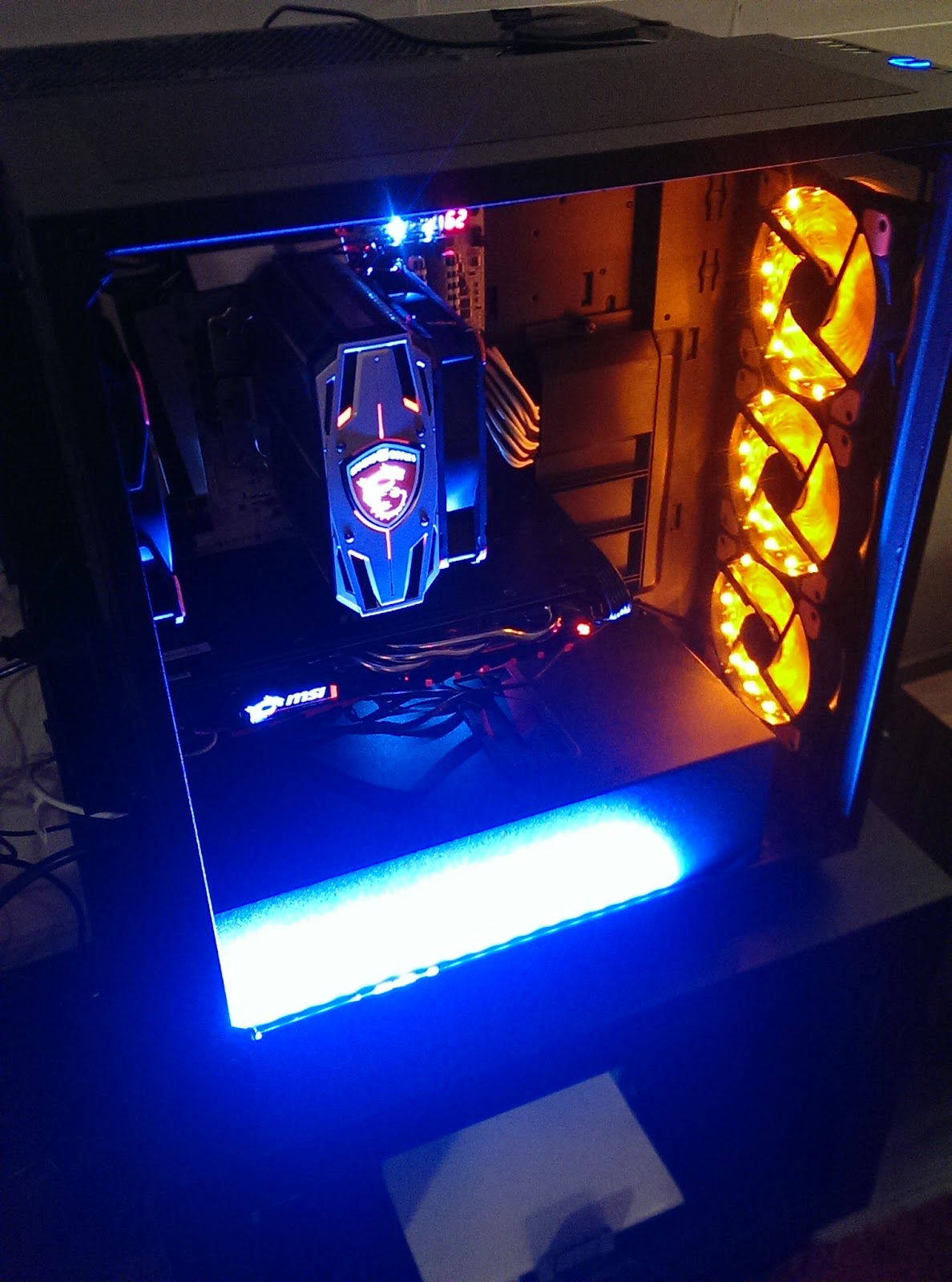 The performance uplift going from FX 8370 to Ryzen 7 1800X is significant, as you can see by the 3DMark Firestrike score comparison.

Next we have the obligatory Cinebench scores: 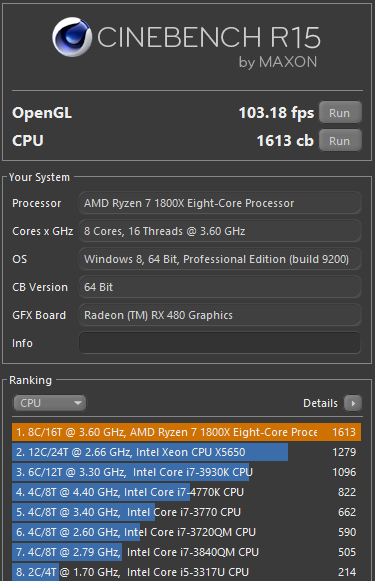 Gaming has been outstanding as well. Ryzen performance has definitely helped this Overwatch n00b. 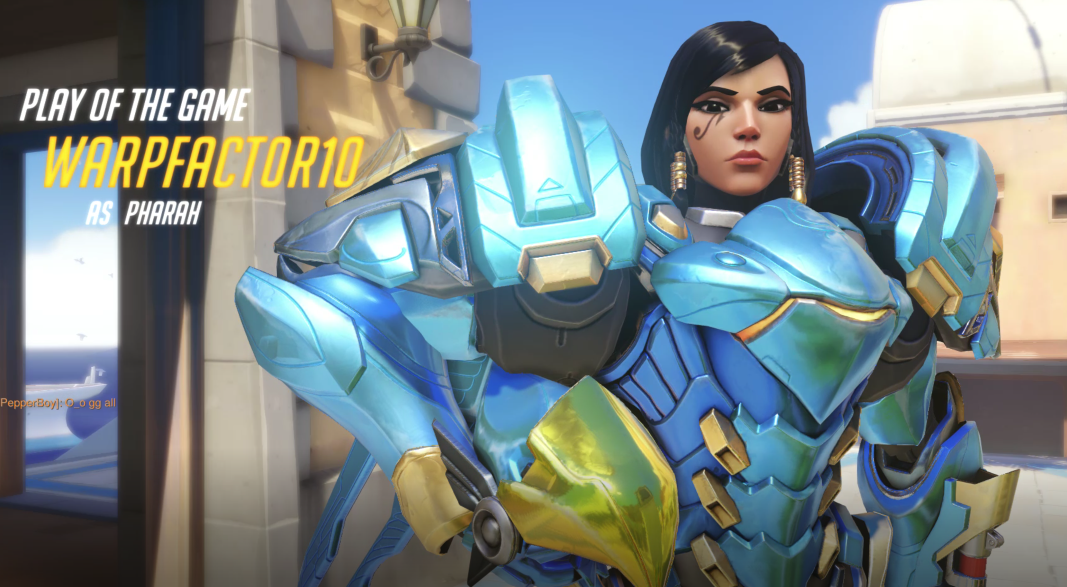 There are more benchmarks on the horizon, and gameplay videos in the works as well. Thanks for stopping by and checking out my review/build log!

It looks great! I'm a little mixed about the blue light though. To be specific the blue (in the photo at least)  washes out the side of the PSU shroud. Is that a case feature or an LED strip that you put in?

Just goes to show that each person has certain visual aspects that they prefer, because this exact element is what made this have a DOOM (2016) color pattern to me, if that makes sense. Either way, I hope all is well jamesc359, our paths haven't crossed much in the forums as of late.

Anyways, back to the subject at hand, I love the build warpfact0r10. I totally agree that the press kit totally calls out to be molded/modded into a case. I've been waiting for someone else to see the same potential there, so now that you've made the connection, will you be bold enough to take up the challenge yourself or instead, do what any self respecting IT Dictator would do, talk an intern into doing it in exchange for a McDonald's Apple Pie?

Wait...scratch that....If I'm in your area, I'll do it for the McDonald's Apple Pie. Don't judge me.

Thanks! It's an RGB light strip I added, but it's actually white. The photo makes it look much brighter than it really is. I messed around with some other colors but white actually works really well, so I'm sticking with it.

Thanks, SBZ! I plan on doing much of the box mod myself, although there may be some additions requiring CAD/metal cutting expertise that I'll recruit someone else with those skills for.

You sir are a lucky man

warpfact0r10​ I realize it might be a little early to ask such a question; but what is your opinion of the Apevia's fans? I noticed they were very "competitively" priced on Newegg and was considering buying some for one of my old systems since it's fans are from the dark ages.

They're fairly quiet, and I am fond of the look of them. I wish they didn't some with an attached 4-pin molex tail that hangs off the 3-pin motherboard connector, but you can also just clip it off.