Never tried any of those but the first 3 look like good coolers.

I would probably pick the DEEPCOOL GAMMAXX 400

The PPT limit for the 3600 is 88W so in theory anything with a TDP higher than that should be enough.

The Ryzen chips boost depending on temperature so more is better.

Voltages up to 1.4 aren't unusual if temperatures are in check.

I am in the same boat as fyrel. I have not used those others. I would bet that they are all likely better than the stock cooler you have.

I did see a review yesterday that tested the prism, wraith and stealth all on a 2600 processor. There was about a 20 degree difference from top to bottom.

They then also tested that DEEPCOOL GAMMAXX 400. It was just marginally below the Prism. So I think that would translate into under load a 70-75 max temp compared to the 90 you get now. Plus that is about as cheap as a decent cooler gets.

Likely the more expensive coolers will perform better but probably by at most another 4-8 degrees, and their fans may last a lot longer. There is a reason they cost more. Plus the top brands also will usually have upgrade paths when new sockets emerge without having to buy the whole cooler again.

correction to the above the cooler they compared to the 3 AMD stock coolers was the Gammaxx 200. So likely that 400 will perform better than the Prism. For the price I think it would definitely fit the bill of budget and better cooling as long as it fits.

here is the link to that review, you may find it interesting:  AMD Coolers Tested: Wraith Prism vs. Wraith Spire vs. Wraith Stealth - TechSpot

Thank you very much all. Only one question though. Amd on ryzen 5 3600 page on there website says MAX TDP of 65 wat but as we can see and you also said PPT is 88 WAT. So i am confused a bit can you explain what is going on. I know TDP is thermal design power means the max heat a component can generate but what is PPT i know it stands for Package Power Tracker but what it do and how it is related to TDP.

Also in my country a seller is selling a cpu cooler on sale which is Coolermaster Eagle Z50 which i haven't found on cooler master global site maybe its just for russia and china. I also didn't found tdp of this cooler if you can help with this too it would be great. Seller is selling this cooler baranded new for 1$ for next some days.

Thanks again i really appreciate your help.

Nope don't get that Eagle it is way worse than the stock cooler. You can get them here 3 for 20 bucks and they are much smaller than stock.

See if by chance you can find this cooler? 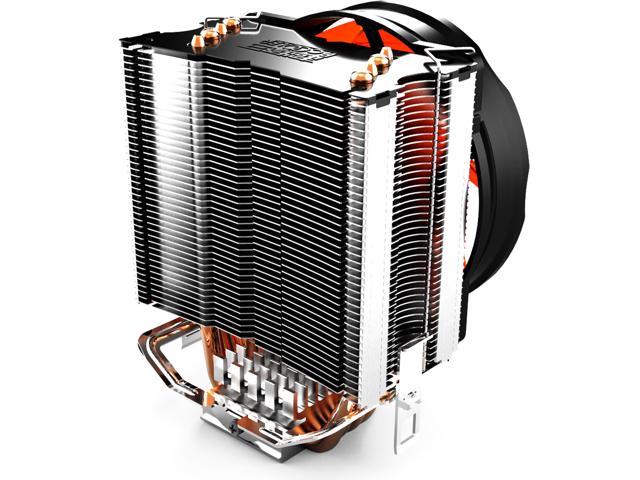 I used these on several AM3 processors. The motherboard mounting holes for AM4 and AM3 are different but ones like the above that use the clip like the stock cooler fit just fine. This one was twice as good as the original stock fan for my PhenomII x6 and that produced more heat than the current 3600. Plus you don't have to remove the board and it is only 125mm tall. If you do find and get it, watch the fins, they are super sharp.

These are not easy to find here so maybe not at all for you.

Or you could check out other C Cooler options.

Thank you i will try to find this one.

PPT is the maximum power that the CPU has to draw on.

Ryzen master shows what percentage of that your processor is drawing at any given time.

For a 65W TDP processor that limit is set to 88W of electrical power.

The electrical power driving the CPU outputs as heat.

So you need to be able to remove the maximum PPT value as heat to run the CPU at maximum power.

Hey guys.One more question . Amd on there website lists "Default TDP/TDP" so i was curious is it the same thing or what if this is default does it means there is another tdp as well like max tdp or something. Is default means on default base clock with turbos off?