Last night I upgraded to 1803.  Around 11AM my wife called me and told me that everything was blue.  People in the DVD's she was trying to watch looked like they were in Avatar...  The Desktop wallpaper of our media system had also gone from reds to blue after coming out of the video.  She rebooted and all was fine.  Started watching and blamo everything was blue again.  I got home and she wasn't kidding.  Here's a reproduction example:

No matter the video (DVD, x264, x265 or other) after going full screen once or a couple of times this happens.

To my shock when I spoke with a rep earlier today at AMD Support he directed me to the fact that interestingly ASRock has a NEWER VGA driver set than what you can download via AMD currently.  This is what they have:

This driver set can be found on their download area for multiple ASRock boards.  In this case I have the X370 Pro4.  I was skeptical but he was right.  This would be the first time in my lifetime that I have found Chipset/Graphics drivers that are newer on a product manufacturers website than what I can get from the manufacturer of the core technology but at any rate these drivers did not fix the issue this evening.

After finding that the "BETA" drivers from ASRock did not resolve this issue I tried portable VLC 3.0.1 and 3.0.0 with both exhibiting this.

The good news is this doesn't happen with VLC 2.2.8.  Hope this helps someone out there.  I am going to file a bug with VideoLAN but since they are a non-profit I hope AMD takes this up with Microsoft. 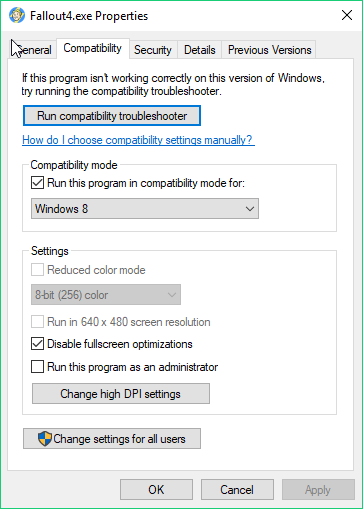 Is that a recommendation based on similar experience?

While I'd prefer to be on the latest VLC release on this system for my families needs 2.2.8 has been working fine ever since I posted about this.

Yes, it is. Character in Fallout 4 had blue faces, normally red textures were blue etc. I had this issue with all games when running fullscreen mode, but not in a windowed mode. Checking this option fixed this problem.

I'm on 1803, fresh install. It wasn't Fallout exclusive, Witcher 3 and Diablo 3 were affected also, after that I got angry and disabled fullscreen optimization on everything before launching it

No problems since then.

Thanks for that advise, i assume that this will fix my problem with the missing red colors too.

I went back to an earlier windows 1709 to get around that bug and was worried what will happen once i'm forced to use 1803.