I've been researching diagnosing the issue and testing with my multimeter now that I'm home. Something is definitely shorting to ground, I just can't figure out what with just the multimeter and without disconnecting any capacitors/other components; there are three capacitors in particular on the PCI-E Aux side which look suspect on their solder joints (dark-gray patches), although even after a thorough inspection (with a microscope, up to 30x power) I cannot see that any of the ceramic capacitors are cracked or otherwise damaged.

I'm going to be looking for some way to give the board a 1V power source of around 2A so I can use some alcohol to look for the shorting component. Short of buying a bench power supply though I'm not sure where I'll get such a power source from, and I'm not electronics-inclined enough to make it myself just yet either. I think my uncle had shown me during my last visit a bench power supply he has, so if he does have one I'll use that next time I visit him.

I'm going to be glad if it's no more than a dead capacitor, since that'll be easier for me to replace and won't necessarily mean getting a reflow station...

I can't respond to you in detail today, but I will attempt to give some help to you tomorrow.
I understand your reasons for attempting a fix.
Is the GPU tripping out the PC PSU at boot or is the GPU simply not recognised by Windows?
If it is the latter, then put a working GPU in primary slot and fit the problem GPU into secondary slot and boot up and see what Windows reports.
You may simply have a corrupted BIOS for example.

If the GPU is preventing your PSU from powering up, then first thing I would do is clean the board completely with Isopropyl alcohol and without removing or modifying any components.

Then I would run a solder reflow on the GPU:
See here:

Here is link to information on creating a cheap solder reflow station for an  HD7970 OC 6GB GPU and repairing it.
I was getting VGA Error at Boot and the PC would not boot up with the GPU installed as primary.
https://community.amd.com/message/2816083?commentID=2816083#comment-2816083
The HD7970 OC 6GB is still working fine.
Bye.

RE; I'm going to be looking for some way to give the board a 1V power source of around 2A so I can use some alcohol to look for the shorting component. Short of buying a bench power supply though I'm not sure where I'll get such a power source from,

You already have a power source, your PSU Power Supply.
There are electronics available to connect onto a PC PSU and turn it into a simple bench power supply.
I own such a board, although it is a basic one.

I will try to get you order and supplier details and a picture of the one I have.

"Is the GPU tripping out the PC PSU at boot or is the GPU simply not recognised by Windows?"

The GPU will, when stone-cold, now occasionally still start up and display a picture for up to about 20s before going 'dead' again. Upon restarting the computer it will simply not detect a GPU is attached to the PCI-E port at all.

As for using my PSU (or any PSU) to at least partially-power the board, I've considered doing this but was concerned about running it for too long like that and possibly causing whichever component it is which is shorting -> overheating to straight-up pop and potentially damage the board around said component?

I was also previously concerned about the GPU overheating if I had to have the heatsink off, but I've remembered now I've got some other heatsinks here I can put on which will at least delay that happening (if it would) long enough I can notice the heatsink is getting too hot. I need to get more alcohol first anyway, so while I'm in the next town over where I do that I'll check by a small electronics supply store there if they happen to have a 1V power supply of some sort just in case, which I could then current limit with something I put in-line perhaps, as necessary.

Thanks for the link to the thread where you outlined the reflow setup you made. I also came across a few other articles and videos for creating different sorts of temperature-controlled setups, all of which I'm going to be looking over more thoroughly when a headache which has been plaguing me the past few days has gone away. Between them I'll figure out what I can source locally to create something usable and affordable to get started, and also approach some people I know of who may have used stations they're interested in selling to compare buying those vs building my own.

RE: The GPU will, when stone-cold, now occasionally still start up and display a picture for up to about 20s before going 'dead' again.
- This indicates to me you need to reflow the GPU. The setup I pointed you to should be enough.
If that doesn't work then you will need to look at the VRM's on the GPU board.
Then if they are o.k. you could look at solder re-ball the contacts on the rear of the GPU die, there is a good Youtube video showing that.

In principle you should start off with the simplest way to get the GPU running again. Which is solder reflow, using correct reflow compound that I gave information on in the link I pointed you to.
Remember the more you spend on fixing this GPU that is money that could have been spent on a new one.

As for your headache - I hope you haven't been breathing in fumes from the industrial alcohol you used to clean the GPU printed circuit board, or solder fumes or some other chemical. You need to be careful and work in a well ventilated area, preferably with a fume extractor. Take care. Hope you get better soon.

Here is the type of PSU to Bench coversion module I have. 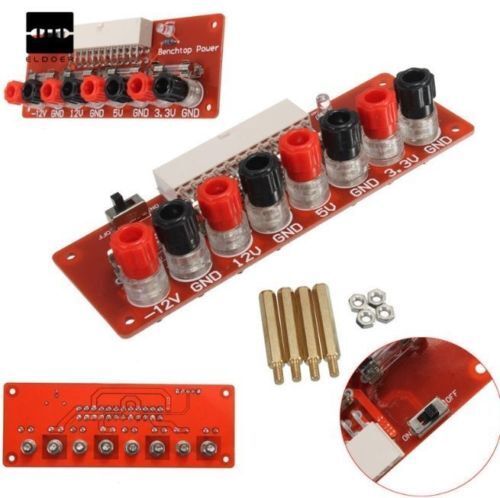 Note that there is no inherent current control in the add in board.
If you have a PSU with Corsair Link type feature and an active PC to drive the PSU you can use Corsair Link / Corsair CUE  to set a current limit.
If that is too complex then you should in theory be able to build a simple transistor based voltage regulator with current limit from any of the outputs supplied by the breakout board.

I really have to go now, but hopefully that gives you a starting point to look for a PSU -> Bench Power Supply module.

If you find a better one with built in voltage output regulator and current limit please let me know.

The PSU _> Bench conversion PCB should about $5 to $10.
If you are prepared to spend ~ $45 you should be able to get something like this: