2) Now with Intel disabled and only AMD enabled, i have seemingly NO graphical chip active: 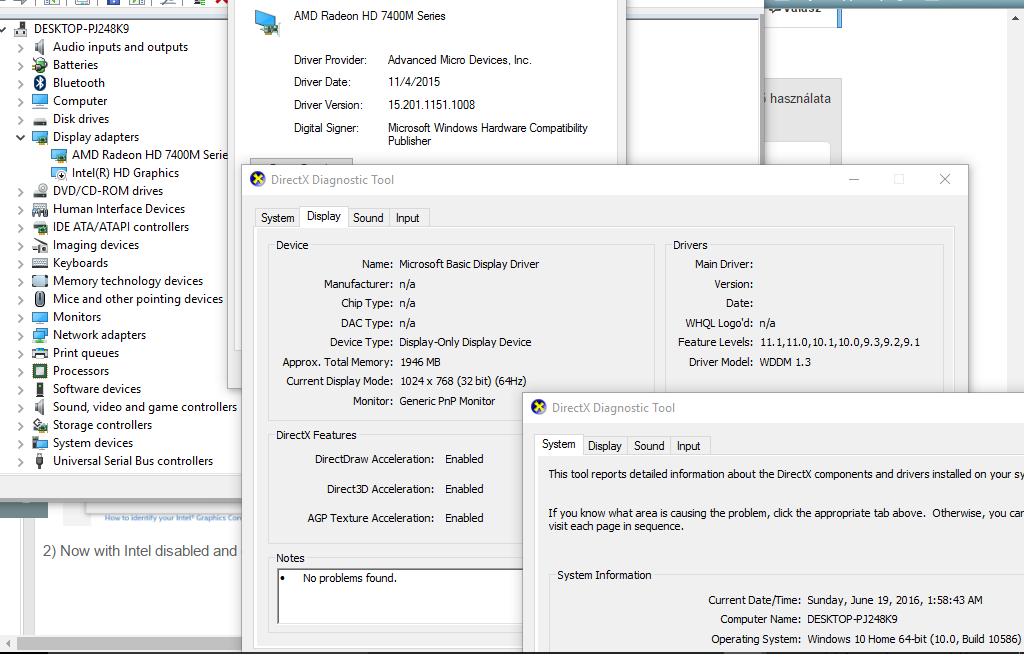 I don't know about you, but for me this means, that the problem lies with the AMD driver, which incorrectly makes the system display my 6400M series chip as 7400M series.

THIS is why i would like to contact someone who actually knows what kind of driver AMD pushed to WindowsUpdate for this card.

No it means Microsoft furnishes a basic driver so you can surf the web....as the chart I furnished you shows. However the basic driver they supply does not work with the AMD drivers in Windows10. It does in Windows 7. You don't have a choice about it. The graphics cards work together. In W10, the Intel graphics do not support the OS and have a special driver from Microsoft. AMD won't work with that. HP designed it that way. If you had a newer laptop, there were some models that allowed the IGP to be disabled...but they gave that option to higher spec'd computers.

Bud, there are websites devoted to this issue. Even they are giving up with Win10. The best known, Leshcat, has furnished his last drivers. You could try them.

I don't really understand what you are saying here.

- The Intel chip works fine on W10 and has full functionality. Why are you saying that it doesn't support the OS? In what way does it not support the OS when the picture i just posted shows that everything seems to be working perfectly fine. It is not a "basic driver microsoft furnished" it has the same functionality as the intel driver under windows 7.

- Why are you talking about the Intel chip? I'm not trying to have switchable graphics, I'm trying to run the AMD chip separately. On its own. Without the Intel chip. And what do you mean "there were some models that allowed the IGP to be disabled" That HAS already worked alright under windows 7 on this laptop. Let me rephrase this: the two chips did already work separately, so why are you telling me now that i need the intel chip to work (which it seemingly does) for the AMD chip to work?

-None of this explains why windows automatically downloads a driver for the AMD chip which is for the wrong series.

Simple answer is, revert to Win7 and all your troubles will disappear. Your graphics solution (switchable) is not compatible.

That is in opposition to what AMD has stated.

It is also not an answer to the things i've asked.

Please, i really would like to know what is going on.

Maybe your right. It could be a conspiracy. Here is a direct line to the people at support (please don't spread this link around). Explain fully the issue you are having. When you get it fixed, please report back so we all can learn.

I really don't know why you are being so hostile. Is this not the support forums where one should go if one has questions?

The AMD GPU could clearly function without the Intel one on a different OS, so why not here?

And why is the AMD GPU being displayed as the wrong series.

This all would not have been a problem had the official sources on hardware compatibility not stated explicitly that the series i'm using was compatible.

But they did, and i went through enormous trouble to get windows 10 to work. Just to be told very rudely on the forums that i should just revert.

It doesn't have to be a conspiracy, it could simply be that the bad driver was pushed to WindowsUpdate, or that someone accidentally set one string in the million lines of code wrong. As it has happened before.

Nope. The 6470 does support Win10...in a desktop computer where it is the only graphics card. It's the Intel graphics that are not supported and AMD graphics won't pair with it.