Radeon HD 6470 M not supported on W10 despite claims

Everywhere where i've checked the official answer is that, while not supporting Dx12, the graphics card i mentioned above SHOULD fully support windows 10.

CCC DOES NOT WORK.

Is there any way to contact the driver dev team so they actually keep what they promised?

I really do not want to start a lawsuit, but this is not acceptable.

You are totally wrong. CCC works perfect with these cards and Win10....with supported hardware.

You left out the important information about your laptop....if you want a answer to this common question supply the info asked for > INFORMATION REQUIRED WHEN POSTING A QUESTION

I had already asked this once before with all the info provided and it did not help, i received no answer.

The windows system check said that all the components would work fine.

The laptop is a HP pavilion g6 1017sh, with dual graphics, and an intel HD chip as secondary graphics.

The intel chip does indeed work fine. Not the AMD main one however:

CCC despite claims on the CCC list of supported cards does NOT recognize the AMD chip.

The driver automatically downloaded from the windows store as per the recommendation does ALSO NOT function, as the Radeon chip is unable to be found by any program subsequently and graphical quality is severely impaired.

The driver supplied by the windows store as per the recommendation on the forums is the only thing that is visibly not working, since it displays the graphics card as Radeon HD 7400M series.

That is the device. The installed driver is not right for that device.

Your laptop switchable graphics work together.   Both graphics cards/chips must support the OS. There is no information on your model laptop. Why post here and not give the specs of your laptop? What Intel graphics do you have...and it is the integrated chip. If you don't now, tell us your CPU. If you don't know, run Speccy and find out.

Is this a repeat of your arguments from 10mths ago.

Have been some changes since.

As i said above the secondary graphics chip is displayed simply as Intel(R) HD Graphics. The CPU is an i5. m480

As i also said above, the Intel HD graphics is what i am using right now, since the AMD card (despite the fact that it should support windows 10) does not work.

Yes, that is my model.

No nothing significant has changed. 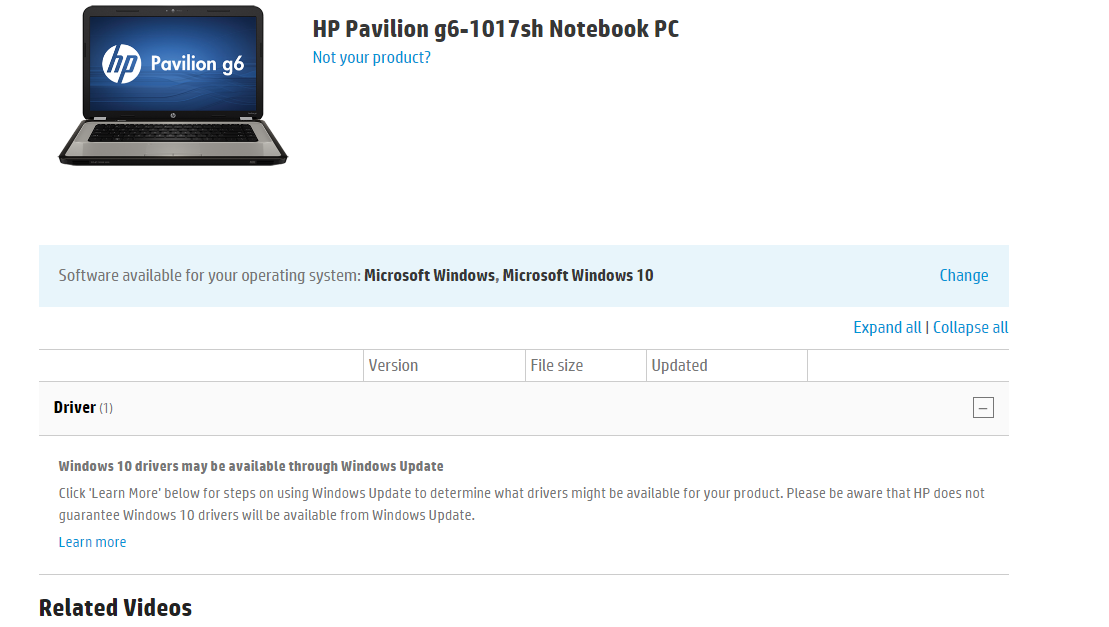 As you can see the HP website still recommends getting the drivers through Windows Update. The driver downloaded for my Radeon HD 6470M by Windows Update is still not working. (not just switchable graphics, the AMD card alone does not work either, while the Intel one does.)

Disabling the Intel HD Graphics chip leaves me completely without graphical hardware, the Radeon HD 6470M is not accessible to the system under any circumstances.

I repeat...your Intel drivers are not compatible with Win10. Your computer is too old. You cannot have workable switchable graphics as both graphics cards must be supported and have Win10 drivers. That's why the AMD drivers will not install.

""" Any 1st or 2nd generation Intel processor with HD2000 or HD3000 (or older HD graphics)  are not supported under Win 10 and no matter what AMD graphics is associated with it, will have switchable graphics problems.

It can not be made any clearer. Take this to someone and have them read/explain it to you.

Look i don't particularly care how much you insult me but that doesn't make you right.

a) The Intel chip works fine. I don't know how it is possible that the intel chip, as you can see in the logs above works fine, and dxdiag also says it works fine, and it can handle everything it could handle on a windows 7 setup, but it still supposedly has a bad driver. So i assume that the driver works.

b) The problem is NOT with switchable graphics. It is with the AMD chip.

I do NOT care about switchable graphics, i don't need it.

I need my Radeon HD6470M card to work as per the specifications given by AMD.

It CAN work with the Intel chip disabled, and no drivers for the intel chip installed under windows 7, so if AMD actually supplied the correct driver it would work here.