That is not a desktop graphics chip...it is a cut-down Mobility graphics. There are differences. Laptops are not made to be overclocked.

A real cut down would mean the chip has less ROP's for example, less stream

processors, etc. All of the hardware is basically the same as the desktop

RX 580 with 4GB except the clock frequency.

As for the argument that laptops were not meant to be overclocked... why do

All I want is UNDERVOLTING enabled on stock clocks.

Also, laptops can EASILY be overclocked and withstand it... anyone who is

interested in laptop modding would first undervolt the hardware to improve

the hardware in question, and then they might try overclocking - only if it

brings real performance difference for a marginal or no increase in

AMD provides a reference for AMD Mobility Radeon graphics drivers with limited support for notebook specific features and functions. This is not intended to be used as a replacement for the notebook manufacturer's driver.

Wouldn't make an ounce of difference even if I tried as OEM's can be rather stubborn like that and they stop releasing new drivers pretty much after the orginal ones were supplied on their website (except potentially the BIOS).

Also, using the original drivers as provided by Asus is a waste of time since they also don't have Wattman enabled.

Freesync is fully functional with the new drivers if one uses an express install, and I guess I will have to stick with MSI afterburner for the undervolt.

I found a work around to make wattman work.. installed current drivers, 18.3.4, radeon overlay and chill work but no wattman. Install msi afterburner and change a few settings, and apply.  Now open radeon and wattman should be available. Not all features work, but if you make custom profiles for each game, you are given full clock and voltage control in those menus. I think you can uninstall msi after, but I intend to leave it because you'll likely need it next time you update drivers.

Finally! Not all heroes wear capes...

Can you tell me how you managed to pull this off? I installed MSI Afterburner (newest), but when I cap the temperature or clock and click apply, it jumps back to stock values immediately. I open Radeon Settings, but there's no WattMan either. Did you have to enable kernel-mode settings in Afterburner to make any significant changes? I really don't want to mess things up, I too am only after downclocking the notebook to make it more silent in late night gaming sessions.

I got it:  after installing MSI afterburner, and playing with it, it didnt seem to work because everything was enabled and no change to the lack of wattman, but after I fully disabled all options(and I mean, all, one by one) in the afterburner main settings page, then reenabled them as seen in the images(the enabling of the io settings had to happen first followed by afterburner restarting, then after reloading the afterburner disabled the ULPS and rebooted the pc) when it came back up, wattman had reappeared and afterburner is also working without conflict, though I intend to remove afterburner for now as my desired outcome was to have a working wattman again. 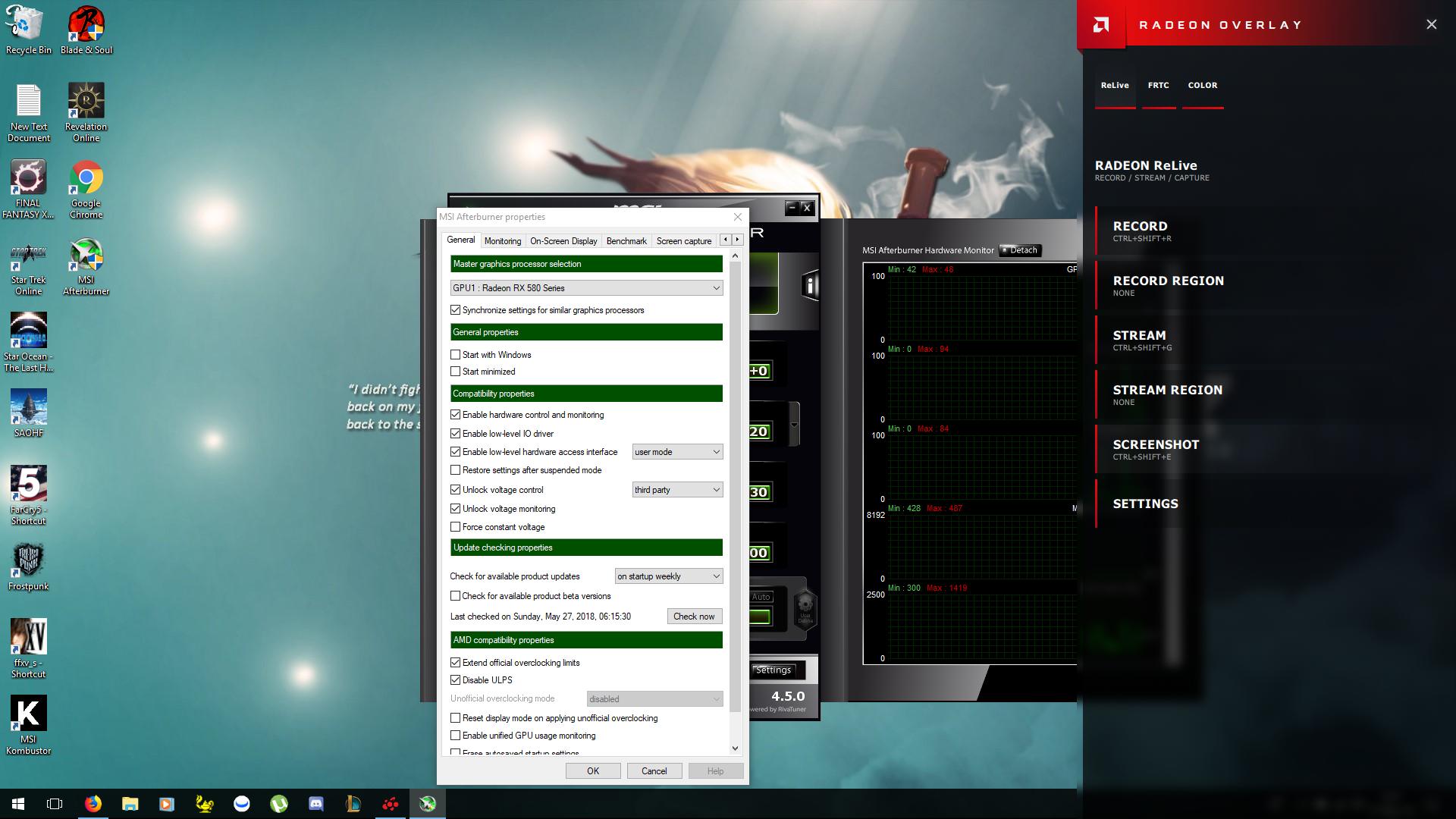 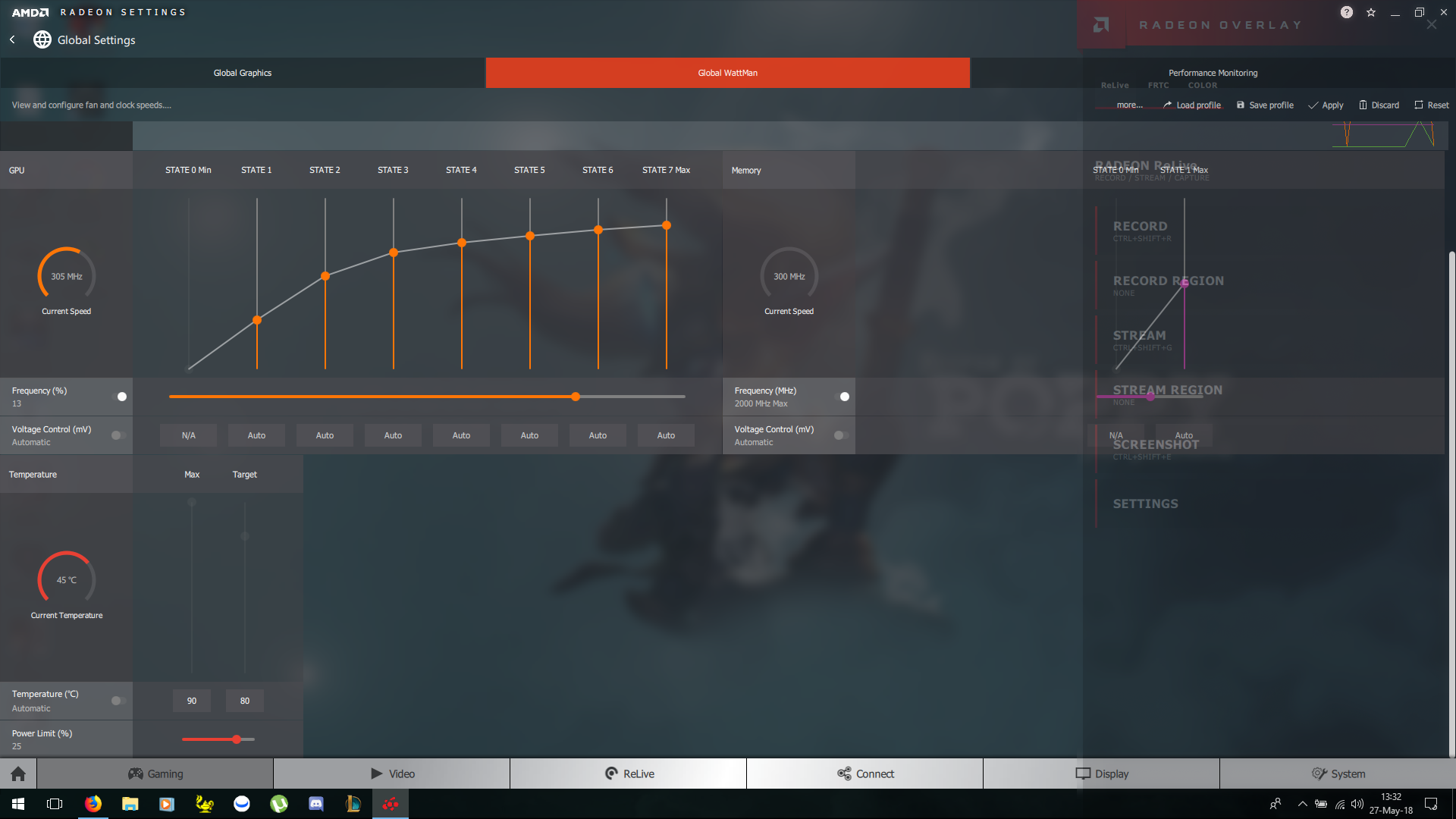 thanks for this, I had wattman before my driver update, and after they rolled out 18.5.1 for some reason it disappeared and a little trial and error and I was able to get it to work on my hp omen 17-an012 w/ rx 580 8 gb.  I was losing my mind at the default clocks because the laptop runs 43-51c which is nice, but the performance is trash compared to a modest increase in power limit and a bump to the clocks. (about +20% power limit and ~+13% gpu clock in my case for optimal temperature in my environment)   Now I'm running ff15 4k edition again on highest w/ 48-60 fps and i'm only hitting 82-84c(90c TDP max)