Can i use crimson ReLive software with my videocard AMD Radeon 7730M?

Can i use crimson ReLive software with my videocard AMD Radeon 7730M?

I can not find the right latest driver for my video card, only old version from DELL site.

And another question. "Who" is guilty: CPU/GPU/Drivers?frequency?

We have updated the title of this discussion with relevant details to better describe your issue.

I thing that you can install the latest amd drivers , I recommend Crimson Relive 17.11.1 or wait for the next big update Radeon Relive Redux in december because 17.11.1 and 17.11.2 are not so stable

You should be able to download and install latest Drivers.

Not sure if Crimson ReLive will work well or not. Your GPU may be to weak anyhow.
As for game performance there are some numbers here:

Here is a link to a review of that laptop, from when it was released in 2012.

I quote from the article below:

"The Inspiron 15R 7520's discrete AMD graphics card helped to boost its graphics performance. In our Crysis 2 graphics tests, the 7520 managed frame rates ranging from 12.7 frames per second (maximum quality settings, 1920-by-1080-pixel resolution) to 63.2 fps (low quality settings, 800-by-600-pixel resolution). While those are good scores for average all-purpose laptops, they're not quite the frame rates you need if you want to play a lot of graphics-intensive games. The Alienware M14x, for instance, carries an Nvidia GeForce GT 650M graphics card, and it achieved a rate of 94.7 fps on our low-quality, 800-by-600-pixel Crysis 2 test (the M14x does not have a full HD screen, and therefore we could not evaluate it on the maximum-quality Crysis 2 test)."

If you are unable to afford or don't want to spend money on a new gaming laptop then one thing you might be able to do to increase your gaming performance would be to use an eGPU Solution. This might be an option for you if you already have an old/ spare GPU and power supply.

It does not look like the laptop in the review has an Expresscard port or Thunderbolt 1 (would likely be too early for that).
Therefore your only option might be to purchase an EXP GDC Wireless Adapter, and run an external GPU on that.

I modded the laptop by removing the Wireless Card and connecting an EXP GDC Beast cable out the rear of the HP Envy 15 which now connects to the EXP GDC Beast Adapter. I can run any AMD GCN based GPU. I can run Crysis 2 at 1920*1080 with all Graphics Settings maxed out at  ~45 FPS with that using a Sapphire R9 280X OC 3GB Vapor-X Tri-X. You should be able to get one of those cards on Ebay for ~$100. You will have to check the cost of the Adapter. I managed to get mine for ~ $25.
You will need to do some investigation to see if your Laptop is compatible if you want to try that route. You may have to do some work to get the adapter to run with over 2GB of RAM.

Obviously if you have the money to spend then go get yourself a gaming laptop with a built in GTX 1070 or 1080 Mobile GPU from Nvidia.
I do not believe AMD is competitive in the Laptop Performance GPU at the moment. I think power consumption versus performance was too high before Polaris based mobile chips.
Maybe AMD will have something better in the future. Fingers Crossed.

If something with a GTX 1080/1070 is too expensive and / or you want to go with AMD Mobile Graphics there are now some laptops with Polaris Mobile GPUs such as :

and what about FPS, anyone has an ideas?

There are some game FPS numbers in this article: AMD Radeon HD 7730M - NotebookCheck.net Tech
For Example:

If you have access to that game, try it out and see if you get similar numbers as a starting point.
Cheers.

And here are some more numbers from the Review of your Laptop: 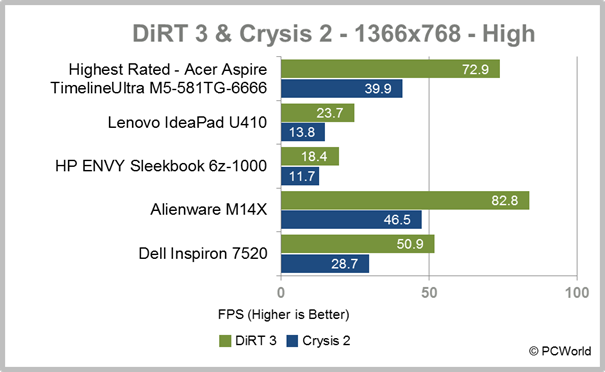 Could you please tell me how much Graphics Ram you have?
If this is a more detailed spec then ... it looks like you only have 2GB of VRAM directly connected to the AMD RADEON 7730M.
The earlier spec for the AMD RADEON 7730M I pointed you to stated that it does not have shared memory ... but you will need to check.
Some Discrete GPUs on Laptops can use some of the Laptop RAM as additional VRAM...
In any case if your games require > 2GB of VRAM (which depends on the settings used) then they will underperform, and the FPS can drop drastically.

Your Laptop GPU is below the minimum system requirements (an AMD HD 5830 1GB Discrete GPU) to run FarCry 4 according to GPU BOSS.

Yes, I tried it. Exacly as in this list.

fifa 18 - middle settings - 70 fps; both indicators in this games i like

but old game with terrible textures...

without textdraws and nick names - 23

and thanks for you answers

RE: and thanks for you answers

Are you saying your laptop is performing as expected based in the Games in the Laptop Review and information about the CPU and GPU?
If that is the case then please mark the answer as correct.

If that is correct then there is not much you can do to Gaming Performance over where it sits other than ensuring as many background CPU processes are
killed as possible before you start gaming. Maybe you have looked at  that already however you might want to try the Game Booster in Asus GPU Tweak II.
You can download it here: Downloads | ROG - Republic of Gamers Global

You should be able to set ASUS GPU Tweak so that it does nothing to change settings on your GPU at all, just allows you to run the Game Booster which kills and stops as many background processes as possible apart from anything needed for gaming.

Another thing you could try is to overclock your Laptop GPU. I do not know if you have AMD Crimson ReLive installed or if it will allow you to change GPU Frequency settings at all. Running AMD Crimson Driver on my Laptop with ATI Mobility HD5850 GPU would not by default let me adjust GPU CLK or MEM CLK but I was able to download and run MSI Afterburner. Set "Extend Overclocking Range" button. Exit MSI Afterburner completely. Reboot the Laptop. Restart Crimson. Then the GPU CLK and MEM CLK frequency sliders are available. It was only able to gain a 1-2 FPS by Overclocking the GPU and MEM CLK by ~5% in some cases. I would not push the overclock on a laptop futher than that though.