Should i update my chip-set drivers? I checked gigabytes website and it has one from like 2 months ago or should i go to the AMD website and do that or are they separate and i should do both?

The reason for the question

So I have a strange problem. I have a GA-AB350 Gaming i recently did a restore on my pc and i had gigabyte app-center on it with an app called System Information Viewer (SIV) which had smart-fan 5 on it. I reinstalled it all and it bricks my PC no joke crashes the whole thing when i open SIV. So the only thing i can think of that would do it is bad chip-set drivers.

and on ryzens website its just got the ryzen master which is for overclocking. Which im not going to do till i get SIV and smartfan5 again because the stupid intake and exaust fans wont go above 500 rpm and my AIO pump only comes on when it needs to. 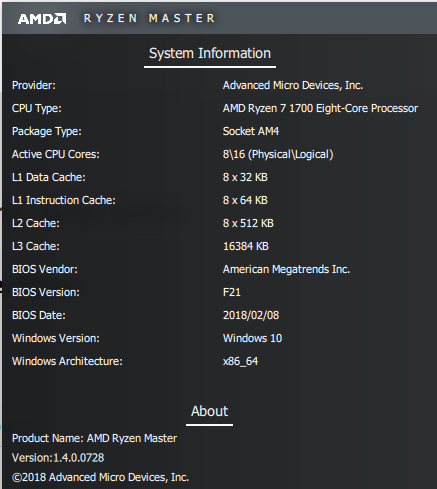 Thats my info from ryzen master.

So. Should i install the chipset drivers from the gigabyte drivers page for my motherboard?

Might be a configuration issue in your Motherboard's BIOS or SIV may be incompatible with either Radeon Driver or Ryzen Master or it has a conflict. SIV doesn't control the GPU Fan correct? Just the Computer Case Fans and CPU Fan.

Can you upload DXDIAG.TXT. Sometimes that will indicate what specific programs are having problems on your computer. Also might want to check Windows Reliability Report that also indicates what software or what areas of Windows are having issues.

Your motherboard has a very new BIOS update. Try updating the BIOS and see if you still have problems: