Today, courtesy of AMD sending me both an RX 570 to test with and a Ryzen 5 1500X based system, I will be looking at the performance of the RX 570 and how to overclock it.

The system I’m testing on is listed below:

Some photos of the GPU, which is quite the beast of a card being a well designed GPU. The front of the Aorus RX 570 has a dual fan design with a black and orange shroud, and you can see the fairly beefy heatpipes and aluminum as well:

On the backside of the GPU, there is a backplate and a copper GPU heatsink as well.

When installed, the GPU has a RGB panel on it that can be controlled through Aorus software tools, and it can be seen here in all it's RGB glory!

First things first when it comes to overclocking: you will need the latest drivers and software for your system. In my case that is the Radeon 17.4.4 drivers, from the AMD website- but as new drivers come out this will vary, and you can find the latest drivers on the AMD website. You may want to install custom software to overclock with your GPU, but the built in Radeon Wattman should do well for most users, and is what I will be using in this guide. Some other options include MSI Afterburner, Aorus Graphics Engine, and Sapphire TriXX to name a few. The other thing you will need is a good GPU stress test, I tend to use GPUPI which is a benchmark, but if you set it to the 100B test it will crank the GPU to 100% for a number of hours which is a good indication if you have a stable overclock or not. Another great tool is Furmark, although sometimes it has issues it still is a good way to test if you are running to high of an overclock for the GPU cooler to handle. 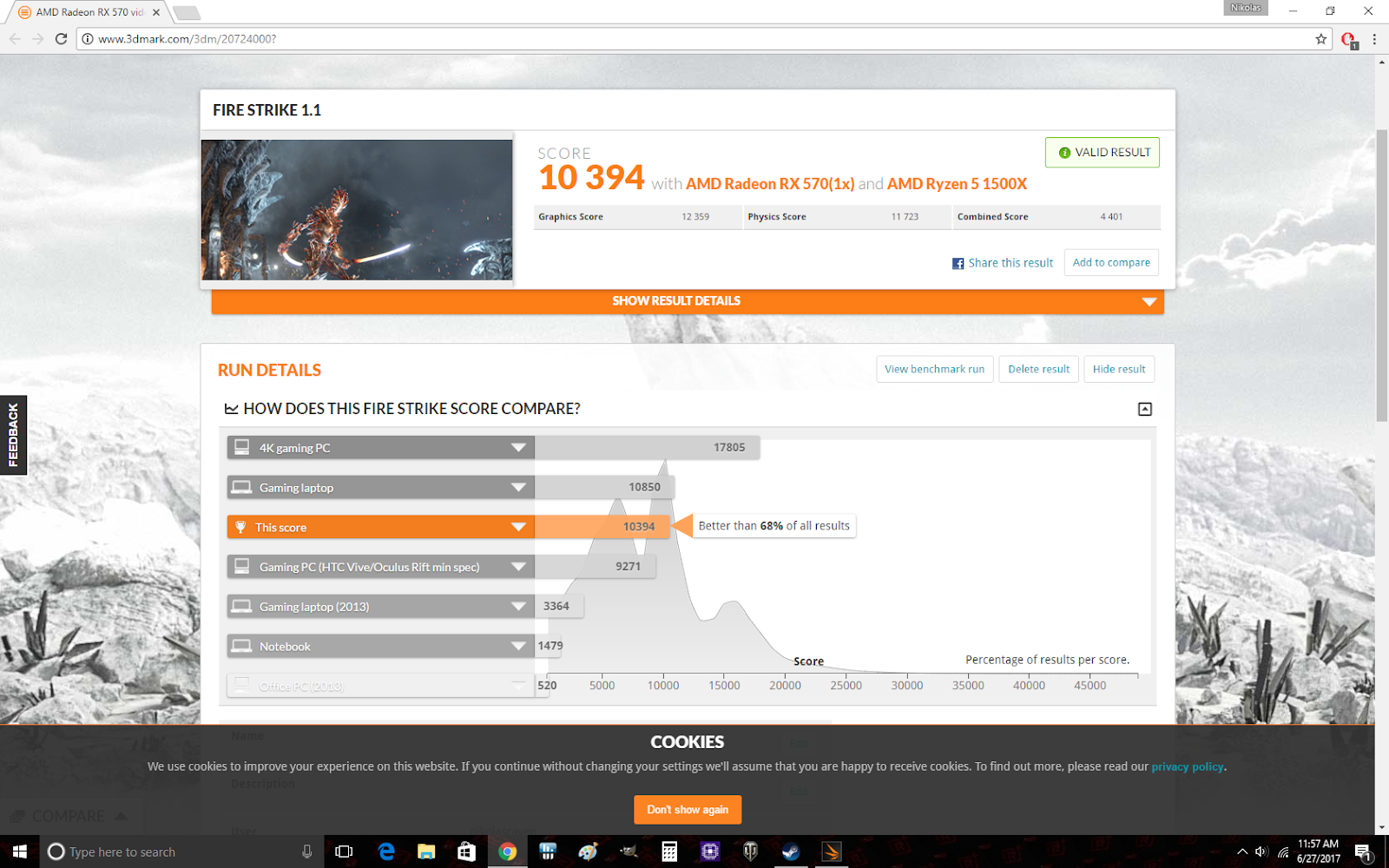 Next up is Metro Last Light Redux. The settings are below: 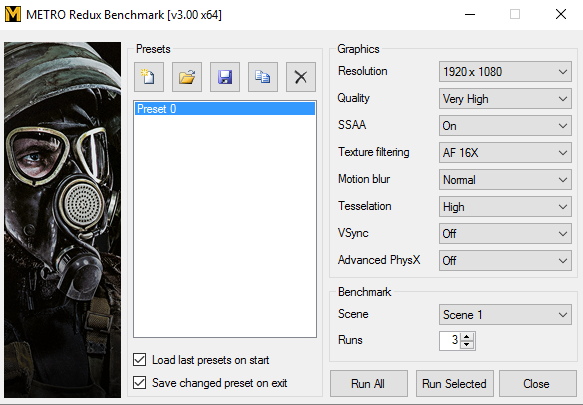 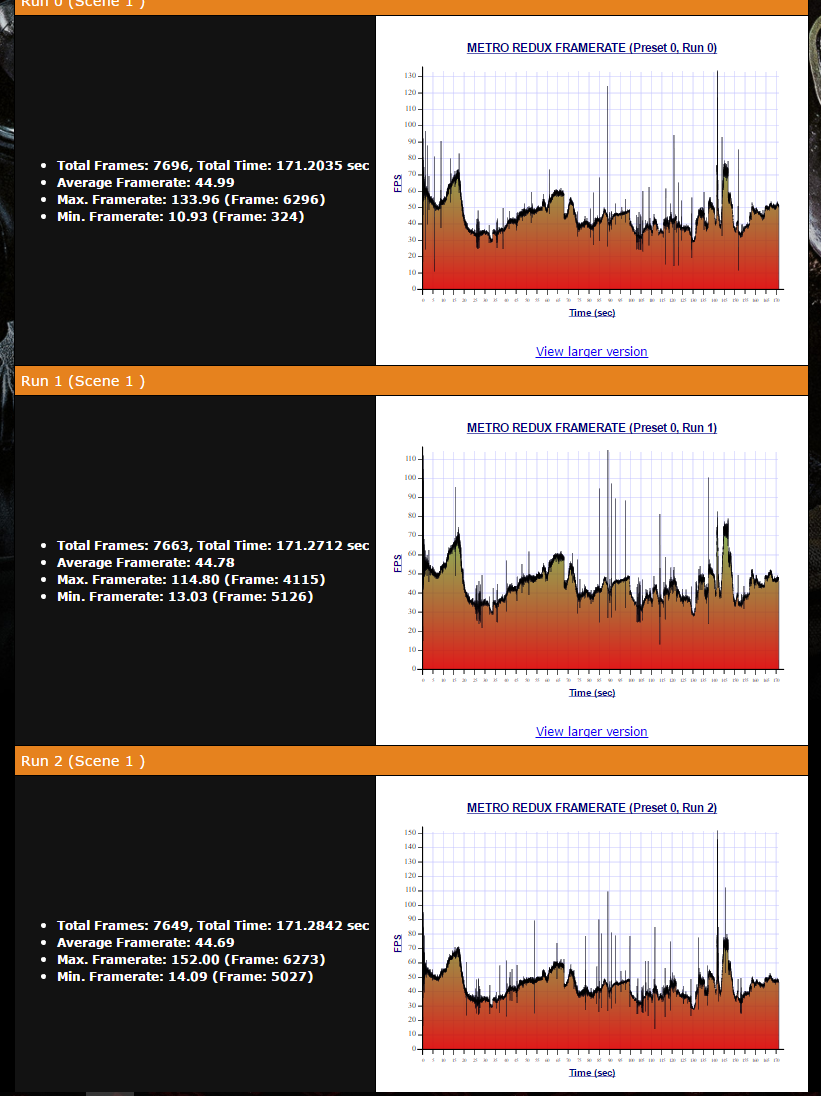 The next game I’ll be testing is Middle Earth Shadow of Mordor, and the settings I used are below: 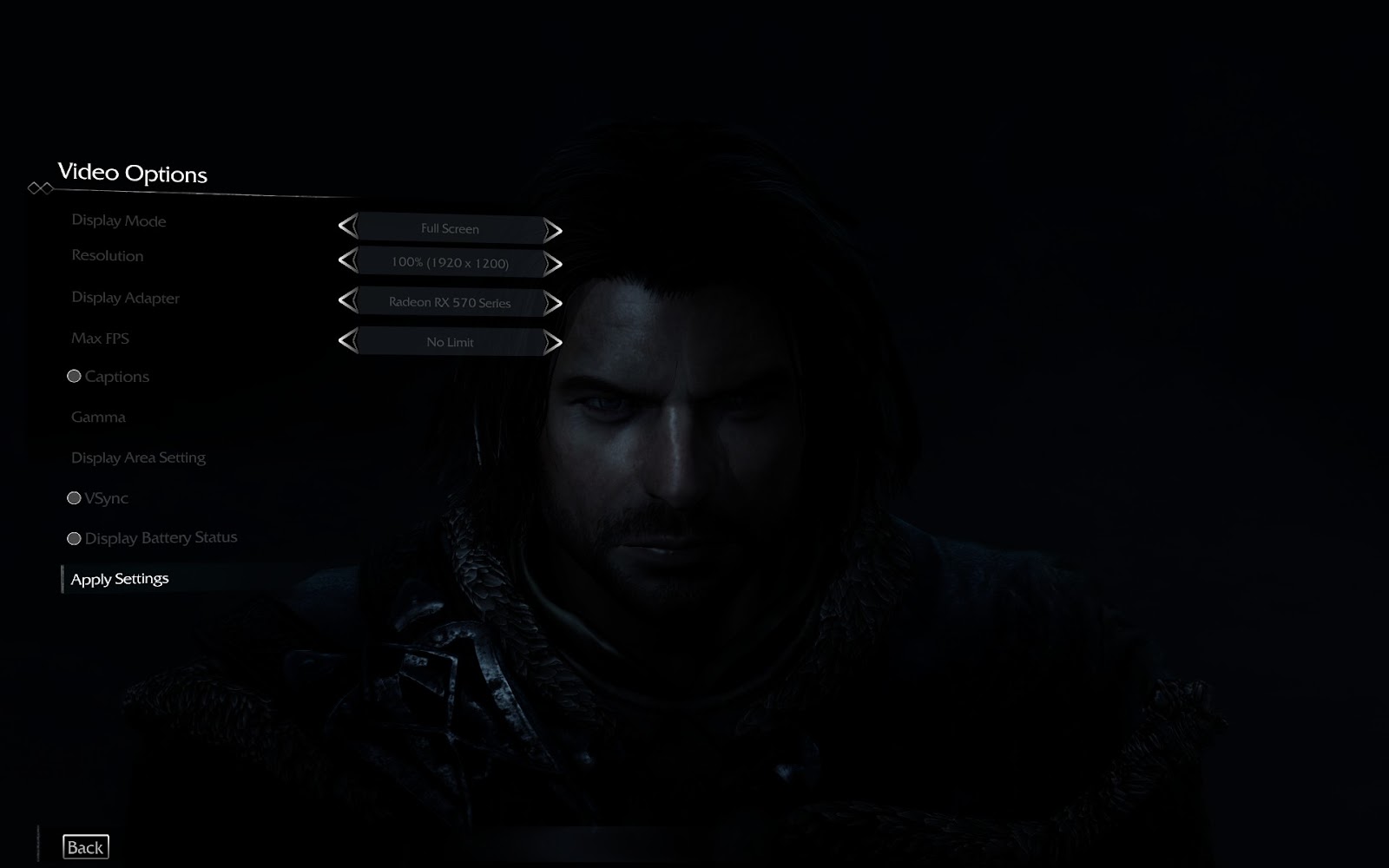 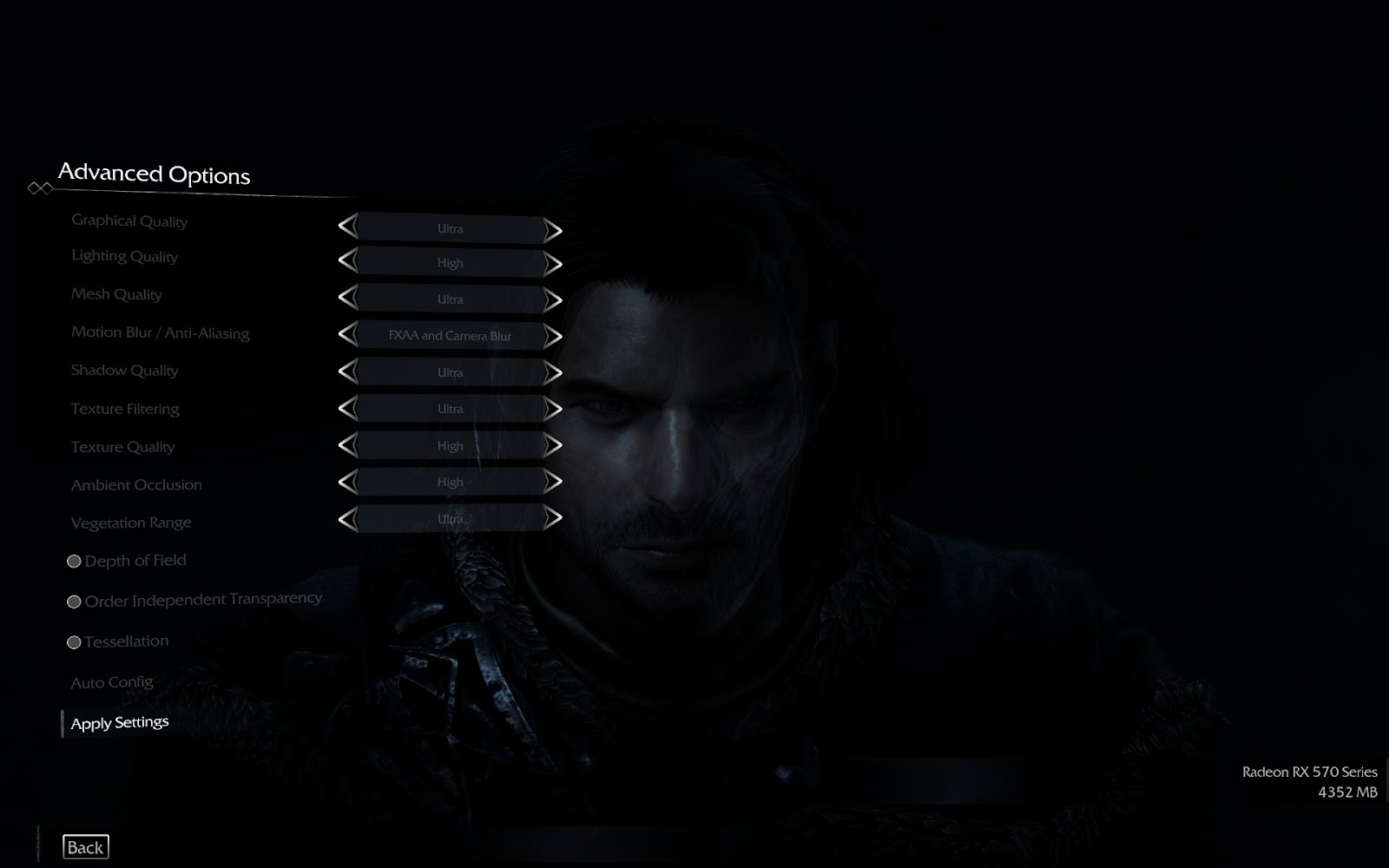 After running the benchmark three times, the average FPS with the above settings was 91.266 FPS.

The next game I’ll test to see the stock performance of is Tomb Raider 2013, which is an incredibly GPU bound game. The settings I used for testing are below: 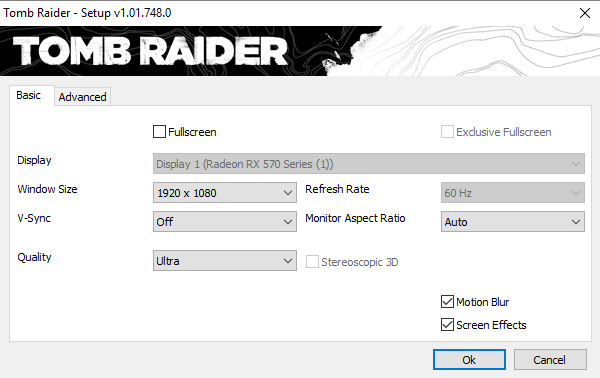 An average of three runs of the benchmark in game gave a result of 146.67, which is buttery smooth at 1080P. Example of one of the results below: 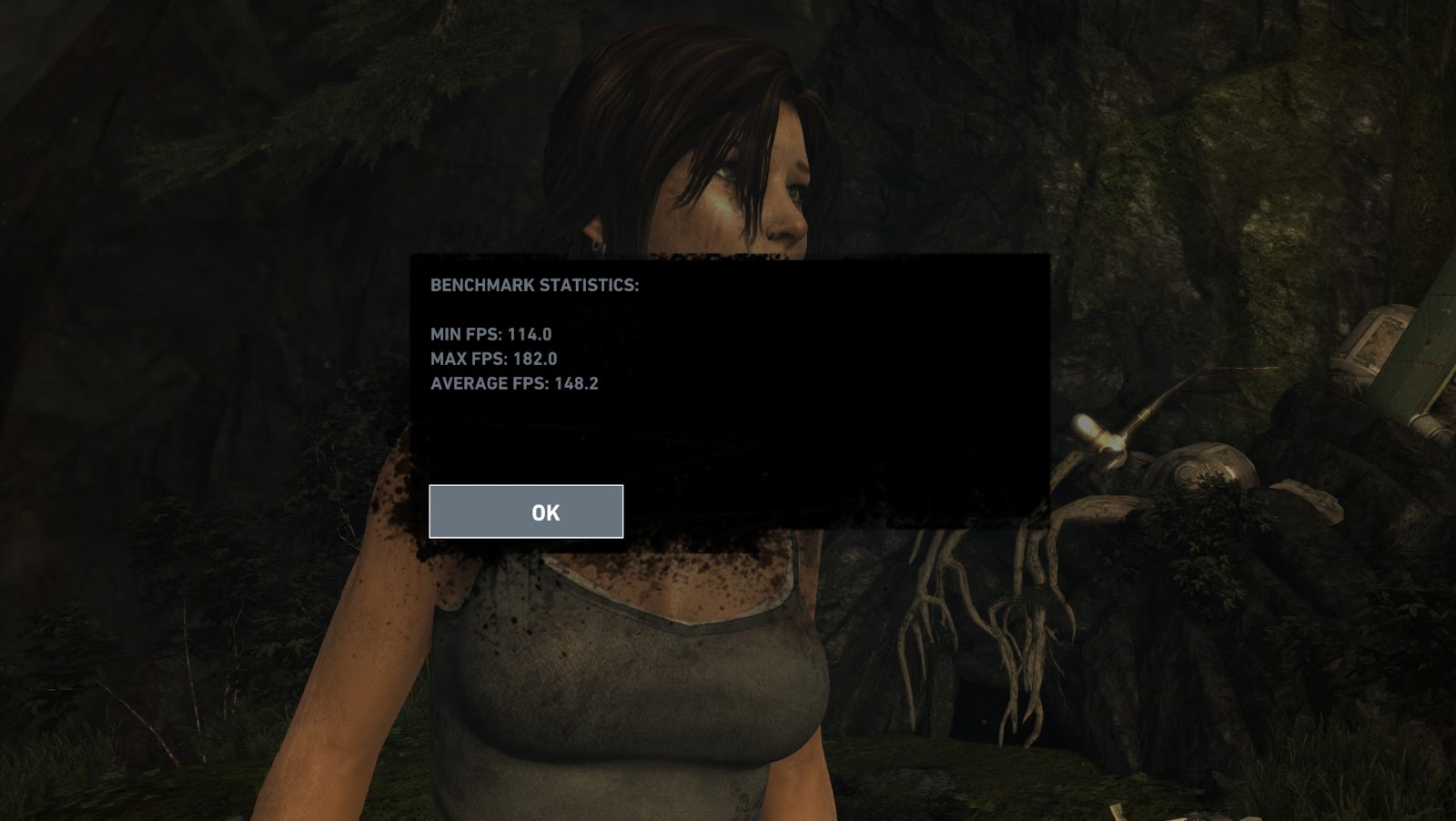 Now that the stock performance has been tested, time to get ready to overclock. When using Radeon Wattman, you simply need to pull up the Radeon Settings by right clicking on the desktop or clicking on it from the icons in windows. From  there you will need to go to the “Gaming” tab in the settings as seen below:

And then click on the Global Settings tab, which will bring you to this tab.

Click over onto the Global Wattman tab and you will be in Radeon Wattman, the built in overclocking tool. You can see all kind of information here, like clock speeds, fan settings, RPM, and etcetera. For an RX 570, this is about what is should look like by default, and there are some important settings to take note of.

First off, the page with the green bars and power states are typically for more advanced users who want to fine tune how fast the GPU is at different states. For example, when idling, (Performance State 0) typically the GPU will sit at 300 mhz. Or when watching Youtube or netflix, it will kick up to 600 mhz..

For the purposes of this article, I’ll just be tuning the last two power states- the full load and Boost settings as they will impact gaming the most. I also switched the setting to show the speed in Mhz instead of percentages, so it is easier to read. 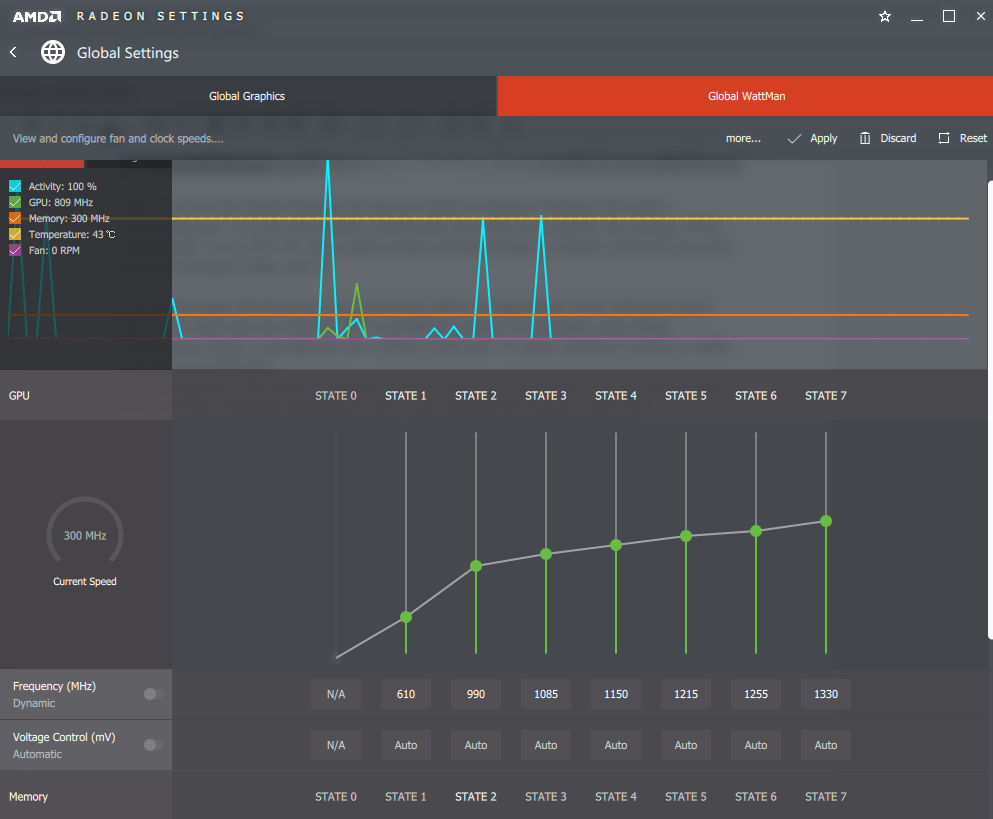 The next part of Wattman is the memory overclocking page, which is similar to the GPU speed one in the performance states graph. However it only has one as memory runs at the same speed all the time. This part of Wattman also shows the fan and power limit settings, which are useful for control the temperature and the amount of power the GPU can use (respectively). The fan settings are pretty straightforward, and you can find ones that work for you or you can let Wattman pick the fan speed automatically- though that may not work as well for keeping temps down. The power limit I will go into more later in the article. 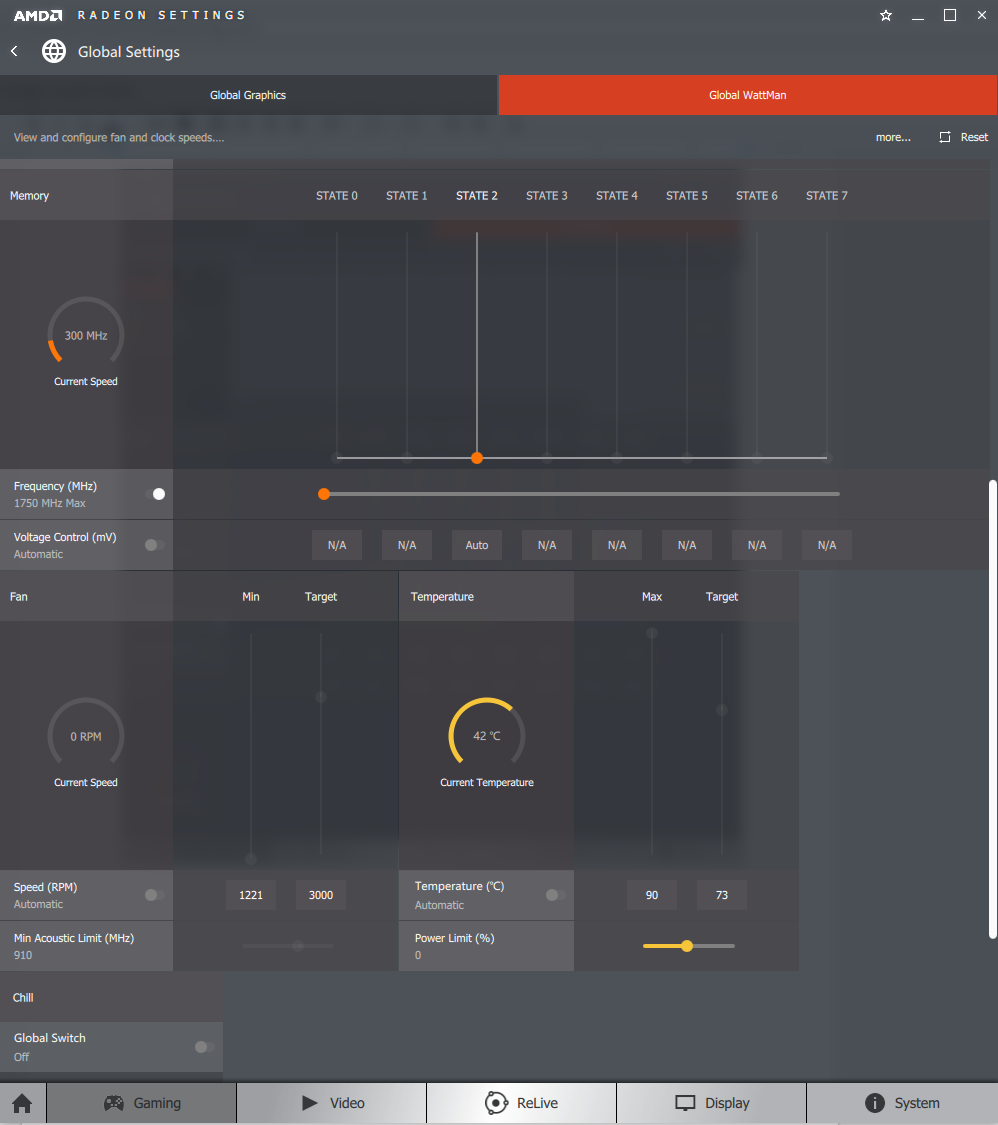 To begin overclocking, just increase the frequency of the GPU core by small amounts, like 25mhz increments, and then test to see if GPUPI, Furmark, or the games you like are stable with it. If the GPU crashes in the stress tests, or gets too hot than you have found the limit of the GPU. The max temperature you usually want an RX series card is around 95 Celsius, and they can safely run to about 90C without issues. If you go higher than that, you can risk damage to the GPU.

But, if you have thermal head room- like 5 or 10 degrees Celsius extra (or more) you can make the power limit higher without any problems. This setting will automatically give, for example, up to 10% more power to the GPU if you set it to +10%. The max setting is +50% and I typically will run somewhere between +25% and +50% as long as temps are good on RX series cards.

Once you have increased the power limit from the default settings, you'l need to test the stress tests again to see if the added power has brought stability. If it has, you can keep adding the small frequency bumps until the card isn't stable again- and then add more power limit again. Typically you will reach a barrier of either stability of temperature before too long, but a 5-15% overclock on the GPU is about normal for most RX 570s.

On to my testing of the Aorus RX 570, which did pretty fairly by achieving a 1405 Mhz overclock on the GPU core, while staying at a max of 73C with a power limit of +50%. Any higher and the GPU would not be very stable through runs of Metro Last Light and GPUPI. That is about a 10% overclock over the stock 1244 Mhz boost clock (or about a 6% overclock over the boost clok of the Aorus card, which has a boost speed of 1330 Mhz), which isn't bad at all and it stayed fairly quiet as well. For those interested the settings I used are pictured below. 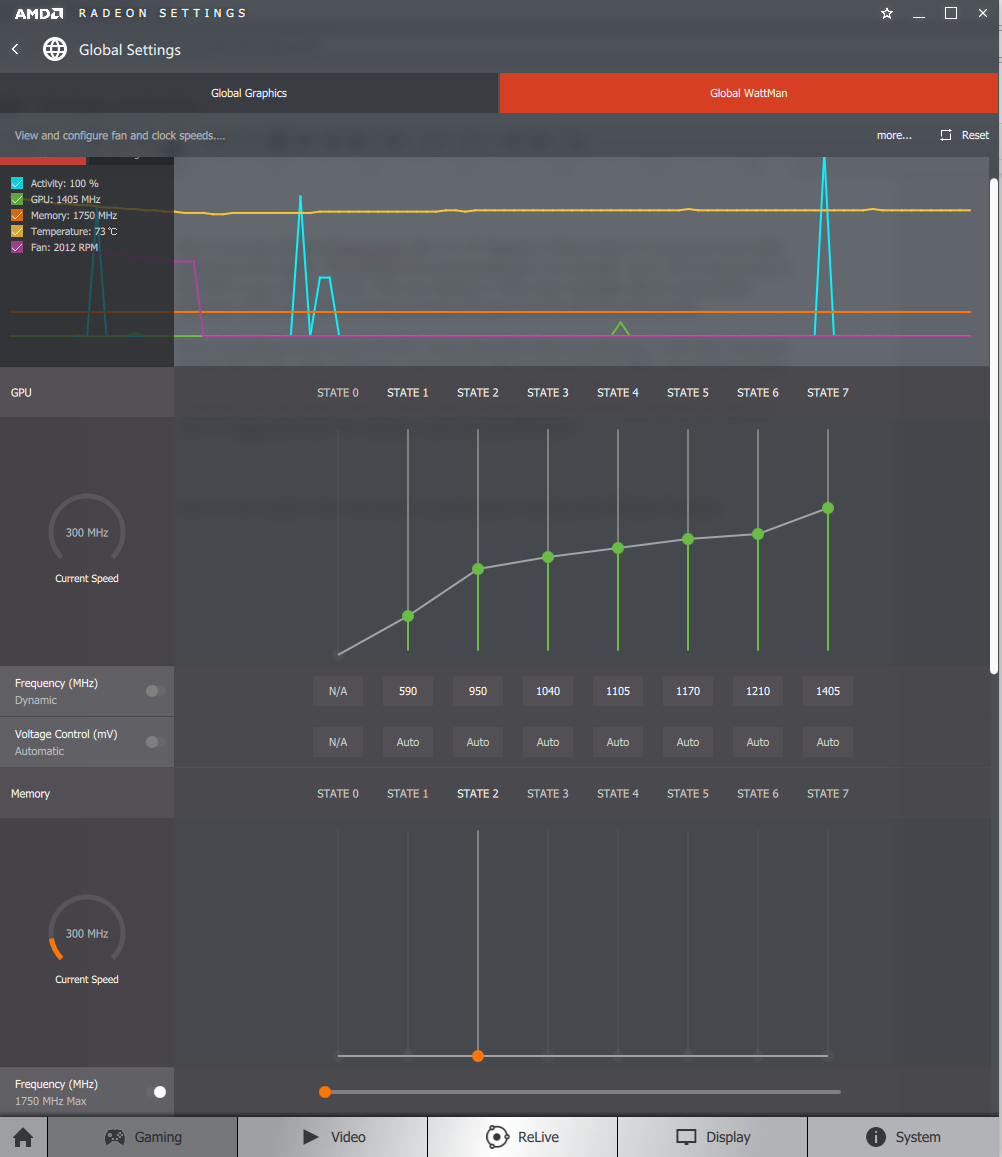 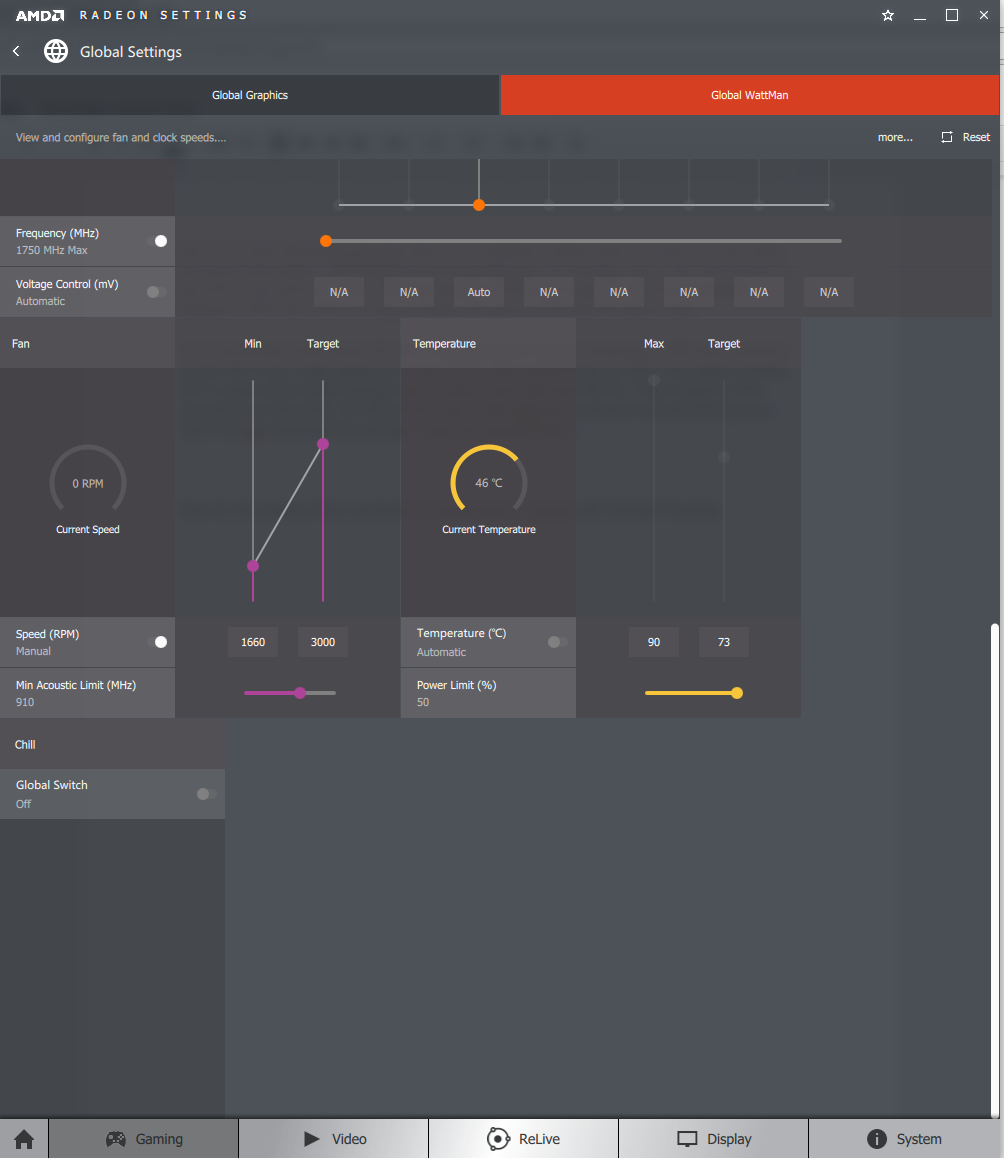 Now for the results of the overclocks on performance, starting with 3DMark Firestrike. 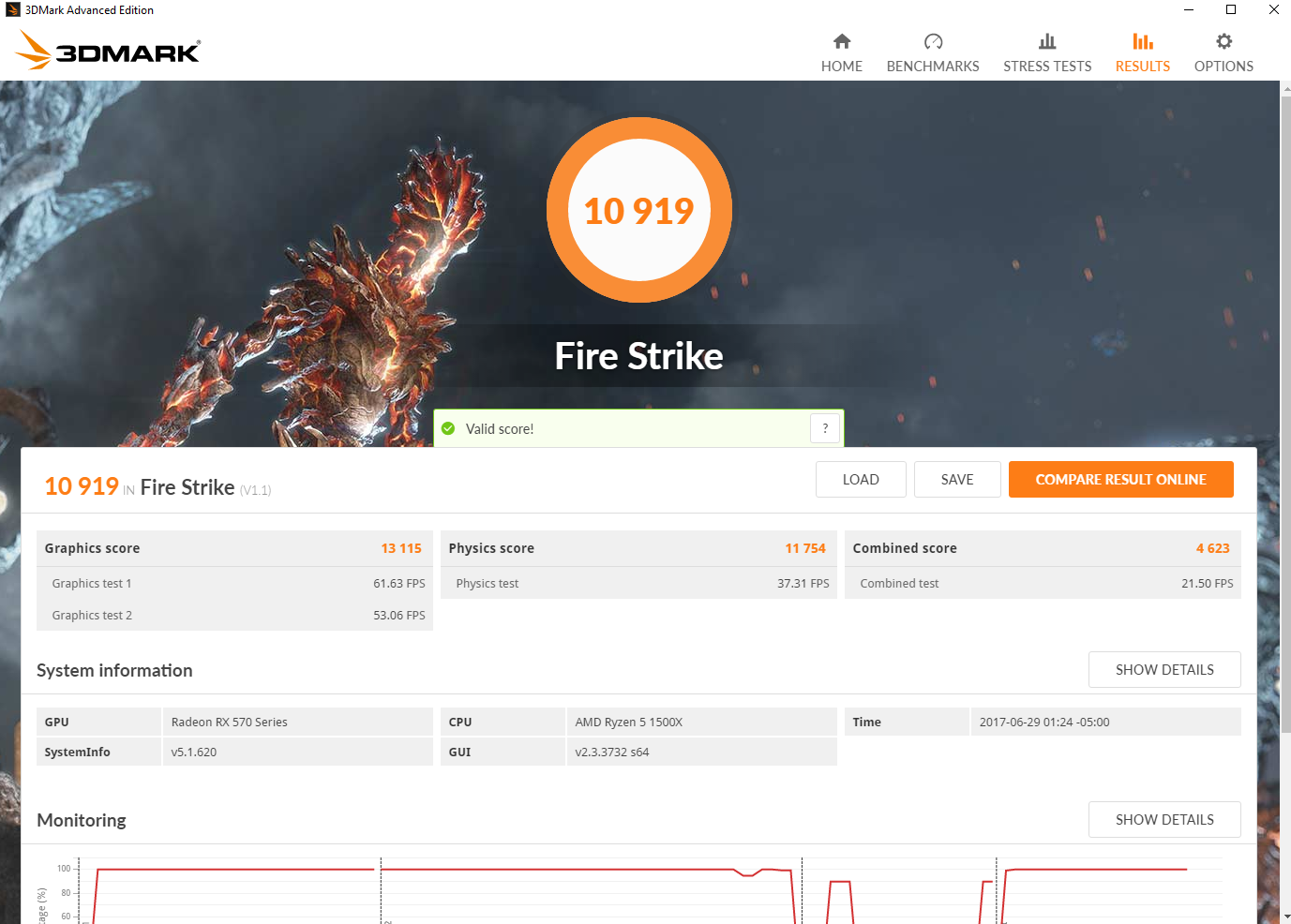 In Firestrike, the around 6-10% boost from the stock speed of the Aorus RX 570 amounted to a 5% overall improvement, which is a very decent amount. Not quite linear, but close to it.

Next up is Metro Last Light Redux and the overclocked system got an average FPS of 47 FPS, vs the 44.82 FPS of stock which amounts to about a 5% performance increase as well. 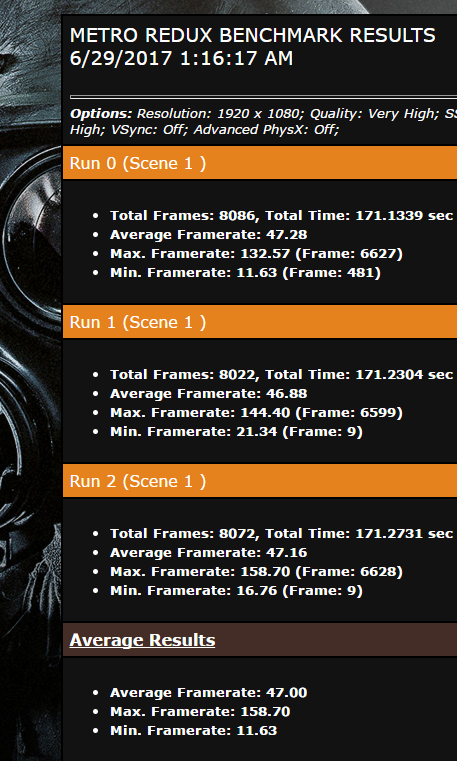 Next up is Middle Earth Shadow of Mordor, which when the RX 570 is overclocked, got an average of 95.71 FPS over three runs of the benchmark. This compared to the stock performance of 91.266 there is about another 5% speed increase, which is quite a decent improvement.

In conclusion, I hope this guide has helped you figure out the basics of how to overclock using Radeon Wattman, and how to test GPU overclocking on the RX 570 GPUs in general! If you have any thoughts, questions, comments let me know in the comments I’m more than happy to help. If you would like me to test other games or go more into depth on anything let me know as well, i can do that too!

Also special thanks to AMD for the 1500X and motherboard and Aorus for the RX 570 to test and review.

You only test the GPU o'clock why not vram too?

Anyway the Aorus RX570 GPU is manufacturer certified for a 1295 oc which I have set in wattman accordingly. Gigabyte's AGE v1.16 is useless crap since it greatly interferes with wattman in terms of gpu speed settings. If you adjust speed with AGE the GPU clock falls down to 300Mhz (in AGE) and is stuck there unless you reset wattman!

PS: I would not call a ~6% FPS gain noteworthy at all

1 Kudo
About the Author
Current Active Duty Military, passionate about all things tech (but especially overclocking), and also AMD hardware fan. My first PC was a Phenom ii x3 720 BE rig, and it was epic while I had it! I'm also known as Nik Caven on Twitter/FB/G+. I was also the first person to write an article on the 390x (what later became known as the Fury X) pictures that showed up back in May 2015! Other than that, I really like the community here. Those other companies have nothing like it :D